Anglican bishop, the second son of Sir Henry Flower Every (10th Baronet) and Mary Isabella Every née Holland, was born in Burton-on-Trent, Staffs, on 3 April 1862.

After gaining his degree at Trinity College, Cambridge, he was ordained in the Church of England in 1885 in the Diocese of Durham.

His qualities of leadership and sympathetic character, which emerged during 17 years' work in the north of England, his interest in the mission field and the fact that he was single, marked him out as a most suitable candidate for the vacant bishopric of the Falkland Islands. 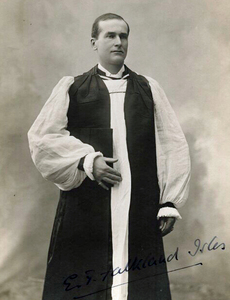 On his arrival in South America, he quickly realised that there had to be a division of the territorially vast diocese under his care.

The division  took place in 1910; the result was that he became Bishop in Argentina and Eastern South America, and a new bishop, Laurence BLAIR, was appointed to the Falkland Islands and the West Coast countries.

In the Falkland Island's Church magazine of 1905 it records a brief visit, made by Every, to Stanley:

'The homeward bound mail SS Panama arrived early on March 29th with the Right Reverend the Bishop of the    Falklands on board. His Lordship came ashore early, arrangements were made at once to have the Cathedral bells (5)    dedicated at 11 am. There were over 60 people present, including Mrs.DEAN, the donor of the bells in memory of Mr  George Dean. The Bishop went onboard again at 2pm. The visit, short as it was, was a most pleasant one.' 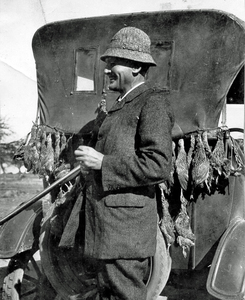 A bishop at leisure - Every was...

In his book 'Bishop Stirling of the Falklands' Canon MacDonald says that the Bishop also dedicated a clock and the West window [also given by Mrs Dean] on this occasion.

When Bishop BLAIR resigned in 1914, Every resumed responsibility for the two dioceses for the years of World War I until the appointment of Bishop de JERSEY.

In his book South American Memories of Thirty Years, Every describes two of the visits he made to the Falkland Islands. The first was in 1916 when he was travelling on a Pacific Steam Navigation Company (PSNC) ship travelling between Montevideo and the West Coast.

He was present at the lecture in the Stanley town hall by Ernest SHACKLETON, who had only the previous day, on 31 May, reached Stanley from Elephant Island and South Georgia.

The other visit he recounts was his final one to the Islands. It took place before the end of World War I, when the numbers of ships calling at the Islands was at a low ebb. Every found himself inadvertently stranded in the Islands for over three months, having arrived on the last PSNC steamer to call before the curtailment of the PSNC service. He describes the people he met and their farms on a visit he made to both East and West Falkland.

Every was the author of:

-    and a number of short church histories.

After a long, distinguished episcopate Every retired from his duties in South America in 1937, and became rector of Egginton, Derbyshire and assistant bishop.

See:  The Anglican Church in South America by Bishop Every

See:  South American Memories of thirty years  (text of book can be downloaded from here)

Edward Francis Every;  The Anglican Church in South America; SPCK, 1916

Frederick Charles MacDonald; Bishop Stirling of the Falklands: the adventurous life of a soldier of the cross whose humility hid the daring spirit of a hero & and an inflexible will to face great risks. Seeley, Service; 1929

David Mountfort; Another Bishop and the City of Stanley; Falkland Islands Journal; 2013