missionary, the son of William and Priscilla Bartlett, was born on 9 August 1824. 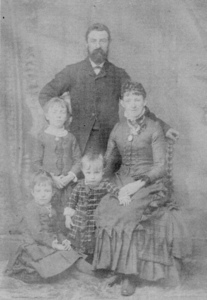 The second and subsequent children were born on Keppel Island. (Ellen married Henry Edward Adams in 1881, Emma married Herbert Stanley Felton in 1882 and Annie married Charles Felton in 1885, all at the Mission Church on Keppel.)

The Bartletts were members of the DESPARD party that came out to the Keppel Island Mission in 1856 on board the Hydaspes. With his background, Bartlett was given responsibility on Keppel, at first as agriculturist and herdsman, then for general farming activities and later on for the buildings. He was the one who taught cultivation skills to successive generations of Indians to take back to Tierra del Fuego. Under his leadership, too, the farm became profitable, sending its produce to Stanley for sale, and so making the Mission less dependent on funds from England. 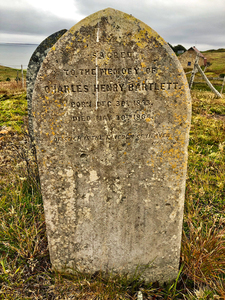 Grave of Charles, the infant son...

Bartlett's steady character meant that when the Mission was left without a superintendent by the departure of Despard in 1861, it was he who was left in charge, with Thomas BRIDGES assisting him, until the arrival of Waite STIRLING 15 months later.

Bartlett and his wife became the longest-serving members of the Keppel Mission, working there until late 1885. He retired to England saying: 'I feel my strength is not equal to my duties'.

Bartlett was the practical member of the mission party. With the help of the Indians, he developed gardens and allotments on Keppel. He and his wife saw the mission group pass through many vicissitudes. Theirs was a stable influence over the whole enterprise. 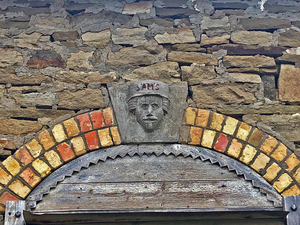 Captain WISEMAN, who dropped in for tea in January 1882 noted that he was: 'a jolly old English farmer' and added 'in fact the whole family a very good specimen of the small yeoman farmer at home'.