colonist and voyager, was born on 13 April 1853 in Hampshire, the son of George and Eleanor (Ellen) Newman. There was already a connection with far-flung British colonies, as George Newman was born around 1822 on St Helena, where his father had been stationed as part of the contingent guarding Napoleon. 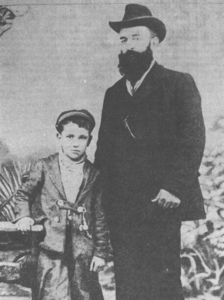 Fred Newman served for a time in HMS Challenger doing admiralty surveys and came to the Falklands from Portsmouth in 1880 to work on West Falkland.

On 31 May 1880 he married Hannah Caroline (Annie) Hollen, the daughter of David Henry Hollen, a German dairyman from Bremen who had come to the Islands around 1860 to work for the FIC, and Charlotte Short, a daughter of John Short, one of the Military PENSIONERS.

In May 1901 the family were moving back to Stanley from Teal Inlet where Fred Newman had been working for some years. The cutter Shamrock of Stanley had gone out to bring the family and their furniture to Stanley but as he had built a boat in his spare time and wished to bring it to town, he decided to sail the 35-40 miles with his nine year old son, Frederick John, as in fine weather he could expect to complete the voyage in nine hours. On Sunday 5 May at 9.30am he set off before the Shamrock, which later passed him off Volunteer Rocks, carrying his wife and five other children. When hailed he seemed happy so they carried on to Stanley ahead of him. He was last seen from the Johnson Harbour camp on the afternoon of 6 May about three miles from land north of Volunteer Rocks - a gale from the south west was blowing and the cutter was tossing about. By the morning of 7 May the small boat had been blown well out from land and Fred Newman could only just see Cape Pembroke lighthouse. Although he tried to put back he was unable to hoist his sails, as some of his gear had been lost, so they drifted at the mercy of the winds first south of the Islands then north. 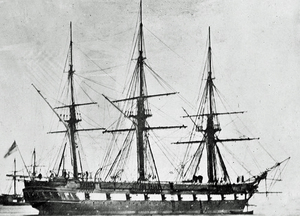 Fred Newman served at one time in...

Luckily, as the family were moving to Stanley, Fred Newman had on board a small quantity of cooked meat, a whole dead sheep, a salted young pig, bread, 20lbs of flour, and 2oz of tea (which he smoked when his tobacco ran out). Even more fortunately, he had removed approximately 200lbs of swedes and turnips and 120lbs of potatoes from his Teal Inlet garden and these provided moisture when the seven gallons of water they had on board was used up within 21 days. Realising by the change in temperature that they were well north of the Islands by then, Fred Newman decided to try for the Patagonian Coast. For five days he sailed westward (with limited rigging), getting within a short distance of land before the currents carried them out again. For the next six days they sailed around trying to reach the Coast again and during this time a heavy fall of rain enabled them to collect some water. By now both had swollen limbs and young Fred's feet and ankles were only saved by his father rubbing them with turpentine.

Finally on 6 July after 62 days on the high seas in a boat only 26ft 7ins long by 8ft 2ins broad and 3ft 6 ins draught, they were within easy reach of the Coast again between Cape Raso and Camerones in Chubut when they were spotted and rescued at 4pm by the Argentine transport Guardia Nacional. She took them to Buenos Aires where she was bound with 29 of the wrecked crew from the Dumbarton Castle whom she had picked up at Staten Island {Isla de los Estades}.

Fred Newman and his son (seated)...

On 10 August Fred Newman and his son were finally returned to Stanley on board the Orellana to rejoin his family and new three month old daughter, born while he was lost at sea. In September's Church Magazine it was reported: 'here he is safe and sound in Stanley once more, going about his daily work as if it had been never interrupted and looking and feeling (so he says) none the worse for his wonderful adventure'. As for the boat, she was sold on the Coast due to the difficulty and expense of returning her to the Falklands and is supposed to be to this day in a museum on the River Plate.

In 1919, young Frederick John returned to Montevideo as one of the crew of the SS Falkland which was undergoing repairs there. On 6 November he fell into the dock and being unable to swim drowned despite the best efforts of his crewmate, Tom Curran. 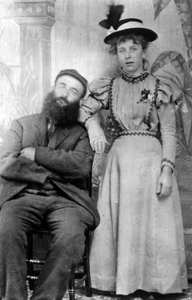 Fred Newman and his daughter...

A family anecdote tells how he built the chimney. He was working at the dockyard at the time and apparently each day his wife would send his terrier Fox down with his lunch in custom made saddlebags. Fred would remove his lunch then place a brick in each bag and send the dog home again. He was also told that he was not allowed to build a new porch on the front of the house as the existing porch extended out onto the footpath so he demolished the old porch and put up a new one all in one night, much to the amusement of his neighbours.

The Newmans were true characters who had hard lives but never lost their sense of humour. They had 20 children, 11 of whom they outlived.

Fred Newman finally passed away on 8 September 1938, almost exactly a year after his wife. Both are buried in Stanley Cemetery along with 15 of their children.