Camp manager, was born probably in or near Exeter in 1827. He came from farming stock and by 1844 he was resident in the Falklands and in the employ of John Bull WHITINGTON at Anson. By 1847 he was a shepherd at Fitzroy for Captain PACKE. He married Mary Ellen Roach in 1852, daughter of Edward Roach, one of the thirty Military PENSIONERS. Edward Roach had served in the British Army in Madras, where his two daughters were born. Rudd appears to have moved from the Packe farm at Fitzroy to work for the Falkland Islands Company soon after it received its Royal Charter in 1852. 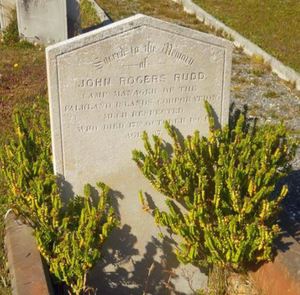 The family lived at Darwin, where Rudd was promoted to manager for the Company in 1861, overseeing many hundreds of acres of land where wild and tame cattle herds grazed. Among the farm workers at this time were small numbers of South American gauchos, whose expertise in herding and taming the wild cattle was necessary to the Company's beef and hide business. The gauchos did, however, have a bad reputation for playing and living hard and were rather volatile when they had drink taken.

On 15 October 1864, whilst on horseback in the mountains near Darwin, John Rogers Rudd was attacked and knifed by one of his gauchos, Manuel Gill. The murder is described in detail by the company manager James LANE (based in Stanley some sixty miles away from Darwin) in the Falkland Island Company's despatch book of 1864:

I regret to have to report a most deplorable event, the assassination of the Camp Manager, John Rudd, by a half-bred Indian [a name commonly applied to gauchos in the Islands] named Gill, on the 15th October. I little thought, when writing to you only 2 days before, that there was "no one capable of taking his place", of having to communicate the painful intelligence of his life being thus terminated. He was a most worthy fellow, and the Company have lost a zealous and valuable servant - he leaves a wife and six young children and expecting shortly a seventh.

At about 5'oclock on Sunday afternoon the 16th October, when at the Dairy, I met men coming into Stanley, who informed me of the circumstances, which were these:

Rudd started off on the Saturday morning with a lad (Doolan) for the 2nd Corral, and at the Cerritos House (under Mount Usborne) was joined by Gill, who was going to the 2nd Corral to kill Government cattle; poor Rudd going himself to see the other men there and make necessary arrangements.

They had travelled [on horseback] as far as one of the streams feeding the San Carlos River, and had crossed it when Gill came behind Rudd and gave him two stabs with his knife. The man chose the edge of a morass - he had a horse which was almost singular in passing over such ground, and Rudd's horse, as is generally the case, would not move without difficulty when on its brink - he had nothing in his hand and tried to get away, but could not; the wretch then drove his horse against Rudd's, gave another stab and Rudd threw himself into the stream. The man then went to the boy [Doolan], and said he was going to kill him - he desisted however, and seeing Rudd had crawled to the bank, he stabbed him again just below the heart and then went away, - shortly returned and placing his coat over his poor victim, who told him that he forgave him.

Rudd could not move - the lad could do little, and after a short time he was sent by Rudd for assistance - this was about four o' clock in the afternoon. The boy reached Darwin Harbour at about 9, when men went off, but could not reach the poor sufferer until 4 the next morning; he had remained exposed and alone, all night in dreadful suffering with snow and rain (November being the Spring season in the southern hemisphere) with 5 wounds and his clothing perforated in 9 places.

Lane tells of his haste to find the doctor and prepare him for the long ride to Rudd. Lane also arranged with the magistrate to send a constable and party to Second Corral (across the mountains) to find the murderer. The doctor was exhausted when he arrived with the party at the small hut at Cerritos, and could only issue directions for medicines and treatment for Rudd, some five hours ride away. 'Unhappily, men arrived at Cerritos in the middle of the night with the news that Rudd had died'. Lane went in search of Gill, with four of his men. He instigated a reward for Gill's capture, to which the government, the Company and the Benefit Club contributed £65. He reported:

I proceeded on Tuesday with the Doctor to Darwin Harbour but must pass over the sad trying scene there with the poor widow and children and the arrival of the body in the evening, and its examination - nothing could be more distressing ...

The following morning (Wednesday) the Doctor returned to Stanley. On Thursday morning the Perseverance arrived at 7 am and at 8 was under weigh with her sad freight, Mrs Rudd and all her children and the corpse. An inquest was held on Friday and a verdict of wilful murder returned. And the funeral (in Stanley cemetery) took place the next day.

After a great deal of activity searching the mountains and valleys of Cerritos, Gill was eventually found, after he had headed south, near to Darwin (tc his paddock is known today as Gill's or Kiel's Park). Gill was escorted to Stanley:

On the following Thursday the 1st of November, he was tried and found guilty of wilful murder and will, I believe, be hanged on Monday next, the 14th November.

Lane goes on to say:

Gill had been some ten years in the Company's service and was always considered a quiet and inoffensive man and preferred by Rudd, when going on journeys, to others - he was with him all the time occupied counting cattle in Lafonia - there were no angry words between them on the day of the murder, but it would appear now that the man had wanted to go inside [Lafonia] to kill cattle and not to 2nd Corral.

There apparently arose some resentment and 'the Devil got possession of him'. Indeed Manuel Gill's motives were never clear and he appears to have been deranged.

I have done all I could for Mrs Rudd, giving her half the house occupied by her brother-in-law Robson and promising her £4 a month for 12 months...........The eldest girl is about 15 and will be taken by Mrs Pyne - the only boy is about 9 only and I will see to his education.

November 15th. The murderer was hanged this morning.

The Company also appears to have commissioned John Rudd's tombstone, on which he is described as 'Much respected'. The river crossing where Gill murdered Rudd became known as Rudd's Pass.

Mary Ellen Rudd remarried to William Roberts in 1867 and they had seven children: she died in Stanley on 6 June 1902, aged 67.

See:  The history of the Rudd family in the Jane Cameron National Archives