In 1932 his family moved to India, where the environment of his first school, in Darjeeling, left a lasting love of mountains. Returning to England in 1938, he continued his education in Luton, and won a Royal Scholarship to Imperial College (IC) in London in 1946, where he took his degree in Geology in 1949. 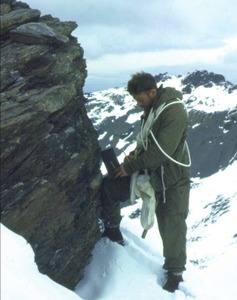 An important influence on his geological training at IC was Robert Shackleton, a distant cousin of Sir Ernest SHACKLETON, and a single-minded enthusiast for field mapping in remote places. In 1949 Shackleton was appointed as Professor of Geology at Liverpool University, and invited Trendall to start a PhD in that department. By early 1951, while he was writing his thesis, Duncan CARSE wrote to Shackleton asking if he knew of a suitable geologist for the 6 man South Georgia Survey 1951-52, and Trendall volunteered for the position.

Trendall's initial geological work on South Georgia went well, but on 1 January 1951, he lost his footing on a steep ice slope and slid unroped into an open bergschrund*; his recovery from 150 feet down took many hours. Although he escaped with his life, all the ligaments of one knee had been totally ruptured, and after being sledged back to Grytviken he returned to the UK on the first available ship. Following a reconstruction operation and many months of rehabilitation Trendall's leg at last regained mobility and strength, and by mid-1953 he accepted Carse's invitation to join the second South Georgia Survey, of 1953-54. In the weeks before departure he resigned from his assistant lectureship at Keele University, completed his PhD thesis and examination, finalised a FIDS Scientific Report on his 1951-52 work, and married Kathleen Waldon, a nurse he had met in hospital, who had played a pivotal role in his rehabilitation. 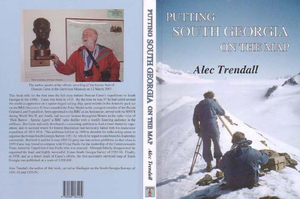 Putting South Georgia on the...

The four man South Georgia Survey 1953-54 was fraught with problems, and only two members (Carse, the leader and Trendall himself) remained for the whole season. But ironically, the latter's opportunities for geological work were enhanced by these circumstances, as he was able to land with sealers extensively around the island. On return to England he wrote up a second FIDS Scientific Report before joining the Uganda Geological Survey as a field geologist. In 1962 Trendall and his family moved to Australia, where he retired as director of the Geological Survey of Western Australia in 1986.

In late 2002 Trendall was contacted by Tony BOMFORD, from whom he learned that Carse was still alive, and working on the book on South Georgia that had been planned for some fifty years; and in the following year he visited Carse in Sussex. After Carse's death in 2004, with his book still incomplete, Trendall began a thorough account of the South Georgia Surveys for publication, with the encouragement and cooperation of all surviving members and Carse's widow Venetia; this is now (2006) complete. 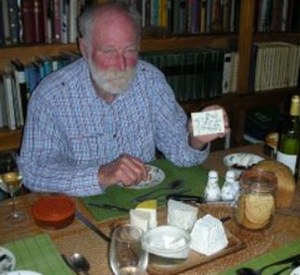 His book, Putting South Georgia on the map: Duncan Carse’s South Georgia Surveys of 1951-56, was self-published in 2011 and printed in Perth, Western Australia.