colonial chaplain, was born on 9 June 1828 in Hampstead, London. He was educated at a private school to a sufficiently high standard to become tutor in a Church school at Bury St Edmunds. With these references and a desire for ordination, but without the wherewithal to go up to university, Bull at 20 years of age was recommended by the Rev AH Duthie of Minster, Kent, as tutor to his brother Captain Duthie's children in Belvidere, Cape Colony, South Africa, and also as catechist in the Knysna district with unofficial sponsorship by the Society for the Propagation of the Gospel (SPG) and the Society for the Propagation of Christian Knowledge. Bull was subsequently engaged at a salary of £60 a year, plus 'free living, lodging and washing', to teach the children, with the hope that he would be ordained a clergyman. From the beginning, his zeal, humility and earnestness were evident. On 30 May, 1848 Bull, who had landed at Plettenberg Bay, rode to Belvidere (a distance of thirty miles), and on the next day, so Captain Duthie reports, 'the children began with Mr. Bull after breakfast'. The children did so well under their young tutor that paterfamilias was slightly put out when Bull announced that he was going to marry Louisa Rex, his employer's sister-in-law, the ninth of 13 children of George Rex. (George Rex was reputed to be the illegitimate son of King George III). Louisa's engagement was the subject of great amusement in the district for she was ten years older than Bull. They were married on Christmas Day 1849, in Holy Trinity Church, Belvidere. Bull and his wife, who was a splendid hostess, were untiring in their work for the church and community - he travelled up to ten miles on a Sunday to conduct services usually in large rooms in private houses, preparing candidates for baptism and confirmation whilst still tutoring the younger Duthie children. On his episcopal visits Bishop Gray of Capetown always spoke highly of Bull's commitment and professionalism. On 8 April 1850 Bull purchased a property in Ashford Grove in the new village of Belvidere and had to move there, but happily this was within walking distance for the Duthie children. 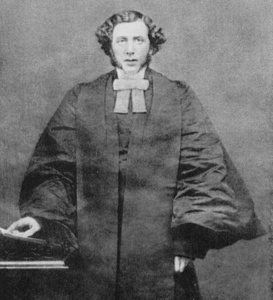 It was after this that Bull's career became rather chequered. He was ordained deacon in 1851 by the Bishop of Capetown, appointed catechist at Plettenberg Bay, and later curate at St. John's-in-the-Wilderness in the Long Kloof. He never paid his dues on the property at Ashford in full and he ended his stay in the Colony dramatically by being arrested on board ship in Table Bay as he and his wife were about to sail for England (1854). He had apparently passed bills for £100 on Bishop Gray which were not honoured. Somehow this must have been resolved, for Bull became curate of St. Anne's, Soho, was ordained priest by the Bishop of Winchester (acting for London) in 1856 and granted a Lambeth MA by the Archbishop of Canterbury in 1859 before setting sail as colonial chaplain to the Falklands on a salary of £400pa plus £25pa from the Admiralty for conducting a weekly Parade Service for the garrison of 35 Marines which had been brought out in January 1859. Henry FAULKNER, the previous chaplain, had died in April that year and Governor MOORE had to take services during an eight month interregnum. Mr and Mrs Bull arrived in the Colony on 29 December 1859. Bull complained about the religious indifference of the people, there being only seven or eight communicants at that time with the school being taught by a pensioner. Bull immediately accepted the offer of the post of inspector of schools. At that time Stanley had 540 inhabitants, including 210 children. A schoolmaster and schoolmistress arrived in 1860 and in 1862 Governor James MACKENZIE forbade Bible reading in school so as not to offend the susceptibilities of non-Anglicans. Bull protested strongly, but in vain, and in 1865 resigned as Inspector of Schools. It was not until 1871 that a new governor (George D'ARCY) allowed Bible reading and reinstated Bull. In addition to keeping an hospitable open house to visiting strangers (mainly seamen,) Mrs Bull ran a Sunday School for the duration of their stay.

Three years before Bull arrived Governor MOORE had moved the Church into the east wing of the Exchange Building and made the west wing into a school. In 1862 the Church was named Holy Trinity and Governor Moore transferred responsibility for it to the churchwardens. Bull must have been a keen early photographer for a photograph taken by him of the newly named church appears in the South American Missionary Society Magazine for 1862. However, the churchwardens were unwilling to bear the expense of its maintenance and in 1865 responsibility for the building reverted to the Government. As colonial chaplain Bull was responsible for settlers in Camp, but there was a development on Keppel Island, which had been partly bought and partly leased by the Patagonian Missionary Society, of which Bull had been highly critical at first. He wrote to SPG: 'The practice of gathering natives from Fuegia to Keppel Island will never do, it is like kidnapping them.' He advocated a settlement on the mainland at Woolya. Perhaps this was too hasty a judgement, for less than five months later he was asking if SPG would aid a native school for Stanley. By 1867 Bull had become the honorary secretary of the (re-named in 1865) South American Missionary Society in Stanley. The Rev Waite Hockin STIRLING, the new superintendent on Keppel, arrived in the Falklands in January 1863. He and Bull soon became firm friends, and on 15 September, 1868 a letter signed by 54 people of Stanley expressing joy at Stirling's nomination as the first bishop was sent to the Bishop of London, no doubt at the instigation of Bull. The newly-consecrated Bishop Stirling was enthroned by Bull in Holy Trinity Church on 14 January 1872. In April 1872, the Bulls sailed for England on leave of absence. In May 1872, Bishop Stirling wrote well of Bull's work to the Archbishop of Canterbury: '...he has had to face some animosity in a small community. If he returns, as a mark of respect I shall make him Archdeacon.' Bull never returned but sent a locum and kept half his salary until resigning in October 1873. Their South African relatives say that the Bulls considered the Falkland Islands appointment was 'virtual banishment' as communication with the outer world was negligible. The 'animosity' may simply have arisen from Bull's principled stand on what he considered to be important Christian matters. There is a Goss family legend that Charles Bull actually 'murdered' Jacob Napoleon GOSS (who in fact died of apoplexy) and stole all his money.

Upon resigning as colonial chaplain Bull became vicar of Nankeeling, Hull, 1873-75, vicar of St. Silas, South Lambeth, 1875-77 and then vicar of St. John, North Woolwich from 1877 until his death. Mr HOCKING the gaoler in Stanley wrote to former Governor D'Arcy to complain that Bull still owed him money. In 1872-3 he had entrusted his life savings to Bull who had invested them in the Goss business - which had then gone insolvent. Hocking had only managed to recover £270 of his investment and wanted the rest back from Bull. A letter from Bull explains that he too had suffered loss of £900 and he had only been trying to help Hocking. By July 1882 he was himself in liquidation. The Colonial Office took Hocking's side: 'I think this slippery gentleman [Bull] ought not to escape so easily' minuted one official and Lord Kimberly (Secretary of State) agreed that Bull's pension should be docked by £50 a year until the debt was repaid.

While Bull lived in London he examined the registers in Kew Chapel as it was believed that the marriage between George III and Hannah Lightfoot, as well as the remarriage of the King and Queen Charlotte, was recorded there. For some reason his search at the Chapel was regarded with suspicion and he had to abandon it before he could find the early dates in which he was interested. An unaccountable fire which broke out in Bull's study not long after his search was probably unconnected, though it was commented on at the time. Bull died in 1884. His wife lived for another five years and died on 23 October 1889. They had no children but at different times adopted three. Two were taken back when their widowed mother contemplated remarriage; the third, who grew up with them and to whom they were greatly attached, was sent back to the Falkland Islands to take up work there shortly before Louisa's death. The 1881 British Census shows an unnamed 13 year old male 'servant, house Boy and Chorister' living with them in Woolwich.