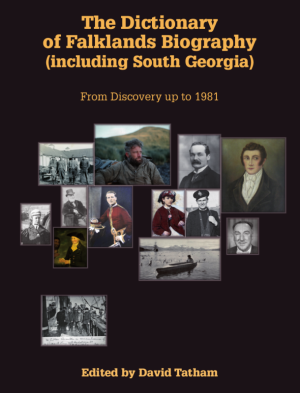 The Dictionary of Falklands Biography casts a fascinating light on the day-to-day life of a small  British colony over 180 years, with its administrators, farmers,  doctors, priests, merchants, naturalists and a fair crop of  characters. Personalities who never visited the Islands, but  impinged on their history, from St Malo and Samuel Johnson  to assorted Argentine presidents, are also covered.

The Dictionary is illustrated, partly in colour, with many paintings and photographs, some from private collections, not previously published.

Over 480 names are included in the Dictionary, which is edited by a former governor of the Falkland Islands, David Tatham. The entries are written by 176 contributors, many of them the world experts on their subjects. Personalities who were active before 1981 and are still alive have written their own accounts of their lives. The biographies included shed new light on: