soldier, was born on 26 August 1893 in Ennis, Co Clare, only son of Dr William Henry Hynes and his wife, née Petty.

He was privately educated and joined the Royal Dublin Fusiliers from Sandhurst in 1916. He was wounded in the Battle of the Somme. Transferred to the Gloucestershire Regiment in 1922, he served in India and Singapore in the 1930s before becoming colonel of the 8th Battalion of the King's Regiment (the Liverpool Irish). 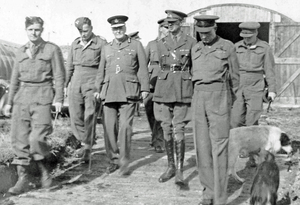 From May 1942 to March 1944 he commanded the Falkland Islands Force of 2000 men, arriving in Stanley on 6 July: 'came to Port William', he wrote, 'am much reminded of the Shannon estuary'.

During his time in the Islands he and his men built the defences, established a network of communications and trained the FIDF. He also established an excellent working relationship with Governor CARDINALL, and with the people of the Islands, whom he held in high regard. On one occasion he set sail in the Fitzroy for South Georgia, because the Argentine navy were placing Argentine flags there (made of tin, because of the high winds). The Argentines withdrew and their flags were replaced with Union Jacks.

At a ceremonial parade in Stanley on 15 January 1944, the governor told the British forces: 'You have re-forged and strengthened the already strong link that has always bound the Falklands to the Motherland'. Hynes' Farewell Order of the Day, two weeks later, read: 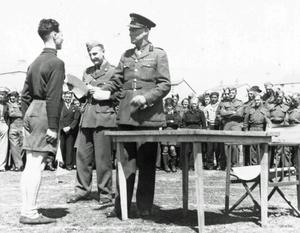 On leaving the Falkland Islands I say farewell with sincere regret to the Falkland Islands Defence Force. I was very privileged to have it included in the force under my command here, and was very impressed with the keenness and zeal with which all ranks carried out their duties and by their unfailing endurance and good humour under any conditions...This is the furthest distant British Colony in the Empire and I am proud of our association together.

On his return to Europe, Hynes was soon involved with the allied forces after D-Day, being based in Belgium where he ran the lines of supply. After the war, he was liaison officer in Germany between the Control Commission and the Emergency Economic Commission for Europe, later the Economic Commission for Europe. He was awarded the OBE in 1944 and advanced to CBE in 1946. He was also mentioned in despatches (9 August 1945) and received the US Legion of Merit in 1947. 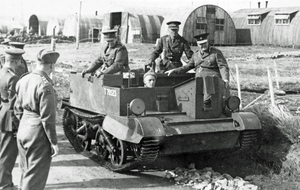 Governor Cardinall riding in a...

He retired as Brigadier in 1952 and was active in charitable work and always keenly involved with anything to do with the Falkland Islands.

In 1928 Hynes married Ruth Kathleen Taylor: they had two daughters: Jane Margaret (b1930) and Diana Mary (b1932). Diana married Barney Miller, an American resident of Argentina and in 1994 he visited Stanley to deliver Hynes' photograph album and other Falklands memorabilia to the Museum.

Editorial comment: 'Prime Minister Winston Churchill ordered troops to the Falkland Islands in 1942 because he feared Japan could invade the far-flung British territory … He was concerned that Japan might use the islands as a base to disrupt valuable Allied shipping routes around Cape Horn and from Argentina’s River Plate into the South Atlantic... Britain was anxious to retain the islands as they were the only base for its South Atlantic Fleet. There were also fears that if the Panama Canal was closed, then the route around Cape Horn would become critical for supplies from Australia and New Zealand to Britain … 1,700 men belonging to the 11th battalion of the West Yorkshire Regiment were sent to the islands., but the Japanese threat never materialized and by late 1944 they returned home.' (from the Japanese Times) 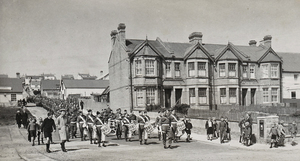