ornithologist, polar pundit and unsung architect of the Antarctic Treaty, was born 23 October 1912 at Bishopgarth, Woking, Surrey, one of four children of a radiologist. He never married. At preparatory school he resolved to become an explorer and aged 18 at Uppingham School he put this in writing to the director of the Scott Polar Research Institute (SPRI), Cambridge. At Emmanuel College, Cambridge, he read Part 1 of the Geographical Tripos before turning to Archaeology and Anthropology. Much of his first two years was devoted to the Cambridge Bird Club. In 1932 he organized and led an expedition to Vatnajökull, Iceland, and the following year to Scoresbysund in East Greenland. 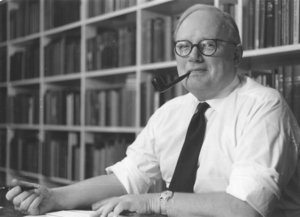 Joining the British Graham Land Expedition 1934-37 as ornithologist, he arrived in Stanley on 28 November 1934 in the expedition's ship Penola. Continuing south, he wintered with the ship at the expedition's base in the Argentine Islands before steaming to Marguerite Bay. After bouts of appendicitis he returned with the ship to the Falklands in early 1936, where his appendix was removed. Penola sailed to Grytviken in South Georgia for a refit during the winter, enabling Roberts to study Antarctic petrels and Elephant seals. In early 1937 he sailed south again with Penola to recover the second wintering party from Marguerite Bay.

When war broke out in 1939 he volunteered for the Navy, but defective eyesight prevented his appointment. After writing up his Antarctic work at the SPRI he was awarded a PhD on 5 June 1940 for a thesis on The biology of some Antarctic birds. From May 1940 he worked with Colin Bertram on a handbook on clothing and equipment required for cold climates. In February 1941 he was appointed to the Intelligence Division of the Admiralty to join a team producing geographical handbooks on Iceland, Spitzbergen and Greenland. This work was carried out at the SPRI, which had been taken over by the Intelligence Division. 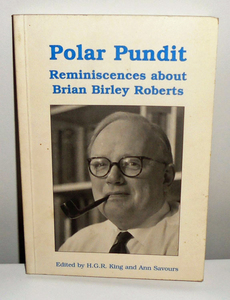 In 1943 Roberts was involved with the start of Operation Tabarin*, the naval forerunner of the Falkland Islands Dependencies Survey (FIDS). On 5 February 1944 he was appointed to the Foreign Office Research Department to work on polar political problems and to deal with planning and policy of the Falkland Islands Dependencies. With his appointment as part-time Research Fellow at the SPRI in January 1946 his life took on the pattern that was to continue until his retirement from the Foreign and Commonwealth Office at the end of 1975: three days per week in London and the remainder in Cambridge.

In November 1945 he was appointed Secretary of the UK Antarctic Place-names Committee. The official gazetteers for the British Antarctic Territory and the Falkland Islands Dependencies are a product of his work for this committee. Initially at the Foreign Office he was concerned with historical surveys of the Falkland Islands and Dependencies, and hence with territorial claims in the Antarctic, which provided the basic argument for continued British activity in the Antarctic in the years after World War II. 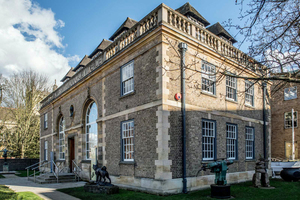 He advocated the expansion of scientific studies in Antarctica, and within the Foreign Office was able to ensure that the case for the continued support of FIDS (later the British Antarctic Survey) was put to Ministers. He sought and gained government support for the Norwegian-British-Swedish Antarctic Expedition of 1949-1952, and later visited the expedition's base Maudheim in Dronning Maud Land.

When the overlapping sovereignty claims of Argentina, Chile and the UK in the Antarctic Peninsula area threatened to disrupt scientific collaboration, Roberts advocated an international approach. No other individual was so fully involved in the drafting of the Antarctic Treaty in 1959 and the subsequent consultative meetings until his retirement in 1975. The Treaty led to the separation at 60° south latitude of the Falkland Islands Dependencies, which formerly extended to the South Pole, from British Antarctic Territory (all of it south of 60°S). This had the effect of reducing the land areas of the Falkland Islands and Dependencies to less than 1 per cent of their former extent. 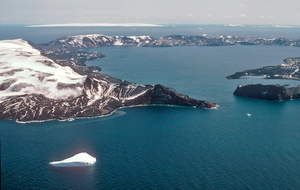 Deception Island (one of the...

Roberts made the major contribution to the Convention for the Conservation of Antarctic Seals which was signed in London and came into effect on 11 March 1978. He will be remembered in Antarctic Treaty affairs as a formidable yet pragmatic negotiator. He last visited the Falklands and British Antarctic stations in 1976. Roberts's lifelong work at SPRI concerned the organization of polar information and led to the publication of the Universal decimal classification for use in polar libraries, today a widely accepted library tool.

He was awarded the Polar Medal in 1939, a CMG in 1969 and the Founder's Medal of the Royal Geographical Society in 1976. He died in Cambridge on 9 October 1978. In his will, he left his entire polar library to the SPRI together with a substantial legacy. Probably nobody in his lifetime did more to further British interests and British achievements in the Antarctic. The SPRI library catalogue lists 134 publications under his name. He is commemorated in the names Roberts Ice Piedmont on Alexander Island and Robertskollen in Dronning Maud Land.

Brian Roberts; Conservation in the Antarctic; Philosophical Transactions of the  Royal Society London; B279; pp 97–104 1977