councillor, was born at Hill Cove, West Falkland on 16 May 1911. His father John Cheek was also born in the Islands but his mother Minnie Cheek, née Tullet, came from near Brighton (Sussex) to work as a maid for the farm manager at Hill Cove. Following the death of his father, his mother, who continued to work in Camp, sent young Fred to Stanley so that he could attend school. After school he worked briefly at Teal Inlet, East Falkland before returning to Hill Cove where he was employed as a shepherd. He was always proud that he was among those who could shear two hundred or more sheep a day - those were the days of hand shears and just a basic wage of about six pounds a month. 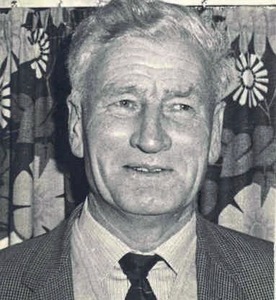 In 1937 Cheek married Dorothy Johnson at Hill Cove. In 1946 they moved to Stanley so that their two sons, John (1939-1996) and Gerald (b1941), could have a better education than was available in Camp in those days. Following a couple of years working as a general hand in the Agricultural Department he started work with the Falkland Islands Company and he continued with them until his retirement. For most of this time he was employed as a handyman. He also undertook a number of contracts for the FIC which included building a bunkhouse at Goose Green in 1964, following the disastrous fire in the former building during the Darwin Sports meeting in February of that year. Other building contracts included the woolshed at Port Stephens, the wool storage warehouse on the FIC jetty and the hovercraft hangar at the Royal Marines base at Moody Brook. Prior to this he spent a number of summer seasons with Ernie Barnes; between them they constructed many miles of fencing in the Walker Creek and Goose Green areas. During the fence-building contracts which involved working a minimum of twelve hours every day, their accommodation was a small caravan built on sledge runners and towed by an ex-World War II Bren gun carrier*. Cheek's later years were spent maintaining the Royal Marines base at Moody Brook. He retired on 1 April 1982, and during the afternoon as he collected his tools was puzzled by the frantic activity of the Marines.

Cheek joined the General Employees Union shortly after its inception in the early nineteen forties. He became a member of the Union's executive committee and was elected chairman for a number of years. His involvement with the Union led to him being asked to stand for LegCo. He was duly elected and served for Stanley from 1964 for three years. He did not stand again as he was not prepared, as he put it, 'to act as a rubber stamp' for decisions made by a majority official and nominated Council.

Cheek was always deeply interested in the Falklands' wildlife; his knowledge of the subject following a lifetime of observation was fascinating to listen to. It was particularly pleasing that it was during his time on Council that the area around Stanley, from Moody Brook to Cape Pembroke was declared a non-shooting area. We can now see the result of this action with birds such as the Upland Geese re-appearing and breeding in the area. Indeed it is quite common these days to see such birds feeding on grassed areas right in the middle of Stanley. Cheek spent the years following his retirement quietly in Stanley with more time to enjoy both his love of gardening and trout fishing. He was widowed in 1984 and died on 14 August 1994.