governor, was born on 23 May 1909, the son of Reverend Edwin Arrowsmith and his wife Kathleen Eggleston, née Porter.

He married Clondagh, eldest daughter of Dr WG Connor, in 1936. They had two daughters, Susan who married a naval officer she met in the Falkland Islands, and Jennefer. Educated at Cheltenham College and Trinity College Oxford, in 1932 he followed the strong Cheltonian tradition of public service by entering the colonial service as assistant district commissioner, Bechuanaland Protectorate.

Arrowsmith became governor of the Falkland Islands 1957 to 1964 and was additionally high commissioner British Antarctic Territory 1962 to 1964. Cheltenham College has the unique distinction of providing three post-war governors of the Falkland Islands, the other two being Sir Edwin's successor Sir Cosmo HASKARD and William Fullerton. 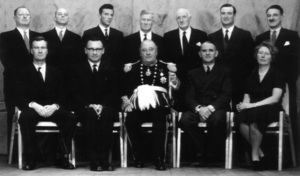 His was an inspired appointment as governor but then his service background and training in the various parts of the Commonwealth made him ideal for the post. It is a measure of his success and popularity that he served such an exceptionally long period in the Islands. He was probably the first governor to talk with Islanders instead of at them.

A commanding figure supported by a highly popular family, he participated naturally in the social life of this close community whilst retaining the dignity of office. Approachable at all times he achieved success because he listened to people and made up his own mind regardless of past prejudices. An instance of this which brought considerable financial benefit to the Islands was his acceptance, in the face of some scepticism and opposition from officials, of proposals from the United Kingdom based companies led by the Falkland Islands Company. These proposals involved the replacement of indirect taxes which the overseas companies were unable to set off against their British tax liability with a much higher corporate direct tax of around the British level. This resulted in substantial diversion of tax from the UK to the Islands. Earlier, following the outbreak of the Korean War, wool prices had soared but much of the benefit had been lost to the Colony because the overall tax rate of the Falkland Islands Company, for example of 66 per cent, was shared 48½ per cent UK and 17½ per cent Falkland Islands. The legislation was introduced in such a way that locally-registered companies were largely unaffected. 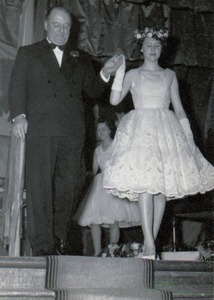 Arrowsmith was a keen fly fisherman and introduced freshwater fish to the Islands to establish fishing as a sport. He was also a firm supporter of all sporting activities in the Islands and no game of football or cricket would be played without his presence and support.

Although the 50th Anniversary of the Battle of the Falkland Islands fell just after his governorship, Arrowsmith undertook the preliminary work. He set out to trace survivors of the battle and located no fewer than 237 officers and men initially and some more later on. Each survivor was presented with a suitable memento including a set of the commemorative stamps issued by the Islands to mark the occasion. 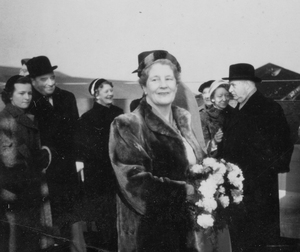 Following his departure from the Falkland Islands, 'Arrow', as he was popularly known, became director of the Overseas Services Resettlement Bureau where he made a great success of finding appropriate employment for colonial service officers whose careers had been cut short by decolonisation. He was also regularly invited to 'meet and greet' visiting VIPs, a role for which his unfailing good humour, tact and charm were ideally suited.

Outside his service roles he was dedicated to helping the blind, being a member of the council of St Dunstan's for 28 years and for 15 years chairman of the Royal Commonwealth Society for the Blind and later vice-president. A fervent supporter of Cheltenham College, Arrowsmith was president of the Cheltonian Society 1968/1969 during its centenary year. 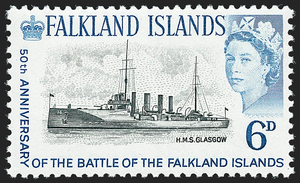 Editorial comment:  Stefan Heijtz writes: The HMS Glasgow error is a 6d. postage stamp error produced for the Falkland Islands in 1964. The stamp issue commemorates the 50th anniversary of the 1914 Battle of the Falkland Islands and was a set of four stamps. The design error shows the incorrect ship, HMS Glasgow, instead of HMS Kent which was the ship shown on the normal 6d. stamps. HMS Glasgow normally appears on the 2 1/2d. stamps. Only one sheet of 60 stamps of the error was produced and it was sent to a stamp dealer in the United States who did not notice the mistake and distributed the stamps to his customers as part of normal sets. Only around 30 examples of the error have been discovered so far and it has a current market value of around £20,000 (in 2021).

See:  The archive of Sir Edwin Arrowsmith - held at the Bodleian Library, Oxford