librarian, teacher and shopkeeper, was born on 26 July 1902 at Marmont Row, Stanley, one of nine children of Vincent and Mary Biggs. Vincent was a shipwright with the Falkland Islands Company as was his father, a combined service of 79 years, and the family were among the original British settlers in the Islands (see James BIGGS). Educated at St. Mary's, she initially trained to be a teacher and at the age of 17 commenced a lifetime of selfless devotion to the community. Her initial salary was £15 per annum and her teaching legacy lives on to this day. Madge Biggs was government librarian for almost 50 years and overcame problems such as poor communications and erratic external mail deliveries with composure and devotion to duty. Because of her background in photography through her family's expertise, she became the Islands' first radiographer, serving for nine years at the King Edward VII Memorial Hospital. Following the outbreak of World War II in 1939, Madge Biggs became the honorary treasurer of the local branch of the Red Cross Society and it is a measure of her ability and dedication that she was granted life membership. When the threat of Japanese invasion occurred and the substantial British Falkland Islands Force arrived, she organised the popular services canteen and was much distressed when her office at the Town Hall was destroyed in 1944 when the building was lost to fire. With her brothers, she made a valiant attempt at saving the cash takings and the papers but was forced to withdraw after carefully locking the doors in the mistaken belief that the fire would be extinguished. The Library was destroyed and had to be built up again from scratch. 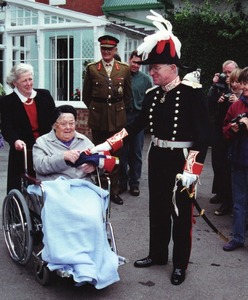 37 Madge Biggs at the celebrations for...

In retirement her father kept a small sweet shop (the 'Penguin Shop'), which he signed over to his children. Madge ran it after her brother's death and it filled her weekdays and Saturday mornings, while the Library took up the evenings and Saturday afternoons. The shop was sold to the FIC during the 1982 conflict. She was a serious stamp collector and, typically, she gave most of her collection away.

Madge was appointed to LegCo in 1950 and served for two years - the first woman on Council. A pillar of strength to St. Mary's and a devout Roman Catholic, Madge Biggs played the harmonium every Sunday for 65 years and led the choir for most of that time. She was honoured by two Popes. It is wholly appropriate that at the time of her death on 8 September 1995, Monsignor Agreiter said: 'A great woman has gone home'. It was a privilege to know Madge Biggs and it is disappointing that her one visit to Britain in her later years was for medical attention. She saw little of England and resisted all pleading to come to London and see the famous sites, insisting that she could not be a burden to friends with her incapacity and that she needed to return to her beloved sister Irene. Her only other departure from the Islands was a wartime trip to Montevideo on the SS Fitzroy for new spectacles, a journey she found extremely uncomfortable. In 1949 she was honoured with an MBE presented by Governor CLIFFORD.