colonial secretary, was born in London on 1 March 1904, the son of Richard Manders KC and Alice Dorothea, née Smith-Wright. The family lived in Killiney, a village (then) outside Dublin and he was educated at Castle Park in Ireland and then at Shrewsbury School followed by Magdalene College, Cambridge. After graduating, he joined the Ceylon Civil Service and spent almost his entire working life in Ceylon {Sri Lanka}. Shortly after arriving in Ceylon, he was taken under the wing of a tea planter and his wife, James and Nancy Epps, and it was their daughter Pam whom he eventually married in September 1948. The fact that he was awarded the OBE in the 1949 New Year's Honours was unrelated! They had their first daughter, Susan, in 1950, followed by Dorothy in 1953. 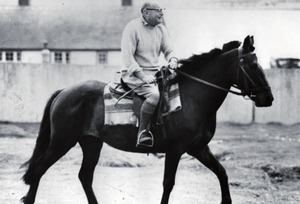 After Ceylon's independence in 1948, Manders was invited to stay on and assist in the changeover. He stayed until 1959, the last British colonial servant on the island. In 1959 the family returned to Milford on Sea in Hampshire where his parents had settled after Irish independence. The idea was that, now he was formally retired, he would teach at a local prep school so he duly undertook a teacher's training course. Before he had time to take up the position offered however, he was invited to come out of retirement to become colonial secretary to the Falkland Islands, somewhere certainly his wife and children had never heard of.

So in 1960 the family set off across the world once again. Manders thoroughly enjoyed his time in Stanley under Governor ARROWSMITH. The couple loved walking, fishing, riding and bird watching so it was a perfect place for them and they spent many happy days visiting the Camp (mainly on horseback), walking in the area around Stanley and on overnight excursions to Kidney Island and Eliza Cove. They also took a trip on the Darwin to South Georgia, again an experience they both adored.

They were very happy in the Falkland Islands and, had it not been for the fact that Susan had been sent to boarding school in England in 1962, would definitely have stayed on for an extra two years as requested. However, because communications were so limited and journeys so long, they decided to return in 1963.

They had made many good friends though and they kept in touch both through them and through the Falkland Islands Review, later the Penguin News. Visitors from Stanley and the camp often stayed in Milford on Sea and both Manders were actively involved in the 'Keep the Falkland Islands British' campaign which preceded the Argentine invasion.