farmer, was born on 20 May 1917 in the Falkland Islands, the eldest child of the marriage of Reginald Carew POLE-EVANS to Orissa, née Lewis.

He had a sister, Audrey (born 1918) and a younger brother, Anthony (born 1919). After study with a nanny/governess, Pole-Evans was sent to school in England at an early age with his brother, Anthony. Douglas moved on to studies in Wales gaining valuable knowledge about grass growing in different terrains to be subsequently applied in the Falklands. 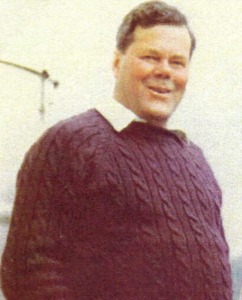 He returned to the Islands in 1936, where he joined the Waldron sheep farm at Port Howard under the management of his father. Here he was to remain for the rest of his working life, save for service with the Falkland Islands Defence Force during World War II, when he was commissioned as a lieutenant under the command of Lieutenant-Colonel Austen WOODGATE.

Towards the end of the war, Pole-Evans met Colonel Woodgate's daughter, Yvonne Mary Woodgate (widely known as Mary) born in Kent, England, on 27 August 1923. With her parents, Mary had arrived in the Falkland Islands a year or two beforehand when her father had been appointed superintendent of public works. 1946 was an eventful year. Pole-Evans and Mary Woodgate wed on 23 April 1946 at Christ Church Cathedral, Port Stanley. Two days later, Pole-Evans was appointed a Justice of the Peace for the Port Howard area. A month or so later he succeeded his father as farm manager at Port Howard. There were two children from the marriage, Susan Mary (b1948) and Glyn Markham (b1950). Susan married Robin Lee, who himself later became the farm manager at Port Howard. Glyn remained in England after his studies to be employed by an oil company.

Come 1950, Pole-Evans began a wide-ranging redevelopment programme at Port Howard. Initially the priority was replacement of roofing and internal insulation, extending to installation of showers and bathrooms. Horses, carts and wagons were replaced by tractors and Landrovers.

In 1955 came the introduction of electricity generators to mechanise sheep shearing. All households and workshops were equipped with electric power, later to be extended to the outlying homes of the shepherds. Pole-Evans was a vastly energetic and lively man with the capacity to get on with his fellow men at all levels. He regarded the redevelopment programme as the major achievement of his career, and took much comfort from its success, recognising the encouragement he received from the Waldron board of directors. 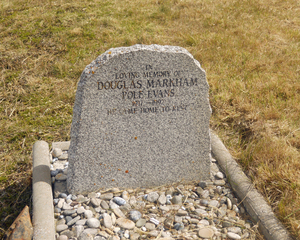 Along the way, and never idle, he maintained an involvement with the all important Falklands Sheep-owners Association, followed by a full commitment to hosting the West Falkland Sports Association occasions when held over several days at Port Howard. The 1966 event, combined with the centenary year celebration of the Waldron farm, was enjoyed by a wide attendance. Unlike his father, he was never a member of LegCo, but served in other ways maintaining a close rapport with the colonial governors of the day.

His management at Port Howard continued over 31 years, ever efficient and in keeping with the times. By 1977 he began to feel the hardship of climbing the hilly countryside, thus choosing to retire at the age of 60 years. This concluded a continuous family connection of 73 years at the Waldron farm. A commendable input into one of the largest sheep farms of the Falkland Islands, and one held in the highest esteem.

Pole-Evans, accompanied by his wife Mary and his mother Orissa, departed for the UK in 1977 to retire in the Devon village of Upottery, close to their son, Glyn. Towards the end of 1991, Pole-Evans revisited the Falklands but a few days after his arrival at Pebble Island, he collapsed and died on 8 January 1992. His gravestone at Port Howard reads: He came home to rest.