architect, was born in St Lawrence, Kent on 2 November 1895, the only child of James Woodgate and Emily Helen, née Austen. During World War I, he served in the army and attained the rank of major. On 28 October 1918 he married Edith Mary Acock by whom he had three children, Betty Eileen (b1921),Yvonne Mary (b1923, who married Douglas POLE-EVANS) and John James Austen (b1929). They lived after their marriage at Hythe, Kent. His wife died on 23 June 1929. He was married for the second time to Alice Eliza Hogg in the summer of 1929 - she would become known to Stanley residents as Peggy. They had another son Peter Austen (b1931). 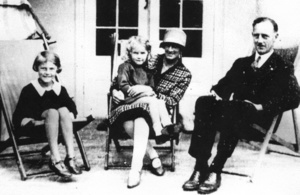 Woodgate practiced as an architect in Folkestone (Kent) and was surveyor to the urban district council. Shortly before World War II, he was appointed superintendent of public works in Stanley, or executive engineer, as the post was then known. He and his wife arrived in the Falklands in the Lafonia from Montevideo on 27 September 1939. The next day he was appointed commanding officer of the Falkland Islands Defence Force, a position he held throughout the war, first as major and later with the rank of lieutenant-colonel. Peggy had been a nurse and she played a large part, as he did, when HMS Exeter, Ajax and Achilles were repaired in Port Stanley in December 1939 after the Battle of the River Plate. Woodgate was awarded the OBE in 1946. The Falkland Islands Weekly News, in announcing the honour, reported:

As 'O.C.' he has set an example of not only being an understanding officer in the general affairs of the Force, but also in doing all in his power to encourage the able man in the ranks. We congratulate him on the fact that he has been honoured by His Majesty the King with the Order of the British Empire. 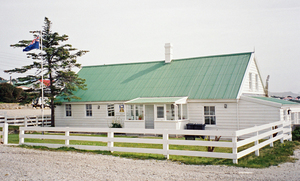 In addition to his other duties in the Falklands, Woodgate also served from his arrival on both Executive and Legislative Councils and tribute was paid to him in 1947 as the longest-serving member of ExCo.

After leaving the Falklands in August 1947 he had several colonial appointments in Tanganika {Tanzania} and Uganda, where he designed the National Bank of India building in Kampala. He was also employed in Ghana, where he died on 25 April 1961.

A tall man, he was something of a sun-worshipper and a keen supporter of Rotary. He was a lover of Gilbert & Sullivan and introduced their works to the Falkland Islands with a production of 'Trial by Jury' in 1943. He even christened his official accommodation in Stanley with the name the building still bears today, 'Gilbert House', in joking reference to 'Sulivan House' (spelt with one 'l', as in Admiral SULIVAN) the colonial secretary's residence. His family took parts in his productions of several operas. On his departure the Weekly News wrote:

As Col. and Mrs. Woodgate leave us to go to Tanganyika, we recall with pleasure the great help they gave in the delightful productions of 'Trial by Jury' and 'The Pirates of Penzance' in Stanley...there must have been a tremendous amount of work on the shoulders of the Colonel and his wife.... We recall Col.Woodgate's very kind and thoughtful act in inviting the elderly people in the town to an afternoon performance of 'The Pirates of Penzance'. The Weekly News extends its good wishes to Colonel and Mrs. Woodgate as they leave our shores for another Colony.

He loved working with wood and making furniture, conscious that several of his ancestors had been carpenters and joiners. He was also a talented draughts-man and produced many delicate and artistic drawings for government, showing his designs for proposed buildings. These drawings have been preserved and are now on display in the Falkland Islands Archives.

A Major Woodgate is referred to as a master at Westbrook House School in Folkestone 1947 - 1967. The headmaster was Kenneth Noel Goring Foster.
I wonder if there is a connection between your father and my old school?