ornithologist and ecologist, was born in Broughty Ferry, Dundee, Scotland on 26 June 1947, the eldest son of Dr Ronald Summers and Doris Summers, née Bulloch. He went to school at Morgan Academy, Dundee, and was an undergraduate at St Andrews and Aberdeen Universities. His PhD was a study of Flounders on the Ythan Estuary north of Aberdeen. He married Judith Ann Dunnet in May 1974 and carried out postgraduate studies at Cape Town University (1974-1977). 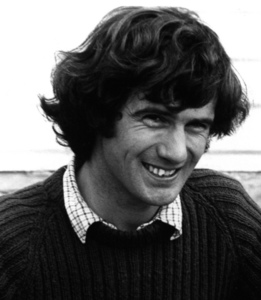 He arrived in the Falkland Islands on 25 September 1977 and joined the Grasslands Trials Unit (GTU), which was investigating ways to improve Falklands' wool production. His role was to investigate the extent to which Upland Geese were affecting the wool industry. At the time, the Upland Goose was seen as a major competitor of sheep, and bounty schemes for killing geese were in operation. Although most GTU staff were based in Stanley, Summers and his wife were accommodated in a semi-detached cottage at Darwin.

The Upland Goose is a member of a small group of wildfowl called sheldgeese, all of which occur only in South America. There was a dearth of knowledge about the basic biology so, on the recommendations of and under the supervision of Professor George DUNNET, the work revolved round making descriptions about the life history of the birds. Basic demographic parameters were also measured: productivity, survival rates and numbers. Most of the studies were carried out near Darwin. However, there were longer trips to Cape Dolphin and Volunteer Point to round up moulting geese for marking. The results of the studies were reported in several scientific publications, and summarised in a book (The Upland Goose) co-authored with Jim McAdam, an agronomist with the GTU. His knowledge of sheldgeese was expanded by trips to Argentina and Peru, where he studied Andean Geese, and led to him writing the species accounts for Bird Families of the World (Kear 2005). 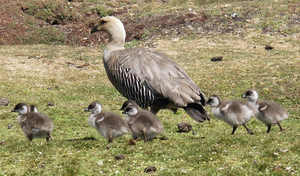 At Goose Green, Dennis Middleton expressed an interest in the goose study. Middleton also taught Summers how to bolas * geese, and they regularly went on outings to trap and ring geese. There was also a famous discussion about whether White-tufted Grebes could fly, an argument that was put to the test by catching one and launching it into the air - it didn't, or was it that it couldn't? The unfortunate bird was returned to the stream. Middleton continued observations on marked Ruddy-headed Geese which led to a joint publication on population turnover in geese in a scientific journal.

It was during their stay in the Islands, that Judy Summers gave birth to their son Mark (b1978) in Stanley. After leave in 1979, the family returned to Darwin. However, the second tour was cut short by Judy's illness, from which she did not recover. Her death effectively terminated his studies on the Upland Goose, though Summers did return for a short spell in August 1980 to tie up loose ends.

Summers continued to work on birds in England for the Ministry of Agriculture Fisheries and Food between 1980 to 1990 on Starlings and Brent Geese (both pest species), and latterly in Scotland with the Royal Society for the Protection of Birds on a range of birds of conservation concern, particularly in pine forests. He was re-married in May 1994 to Bozena Kalejta, a Polish ornithologist. They have one child Amanda, (b1995).

See:  Sheld geese and man in the Falkland Islands

Ron Summers; Jim McAdam; (drawings by Derek Robertson); The Upland Goose: A study of the interaction between geese, sheep and man in the Falkland Islands; Bluntisham Books; 1993