His father was farming in Argentina at the time, and his mother was the eldest daughter of Erasmus Jones of the London and River Plate Bank.

Bertrand had two brothers, Robert (Robbie) and Erasmus (Ras) neither of whom married, and a sister Yvonne who had three sons.

Home was the family farm, Sierra Ventana, Santa Cruz. Bertrand also attended school in Buenos Aires, living with his maternal uncle. He grew up on the farm, doing all the usual chores, riding everywhere, taming horses and using the boleadores to catch ostrich and wild cattle. He learned to work leather and to make the horse gear that was part of a working life. 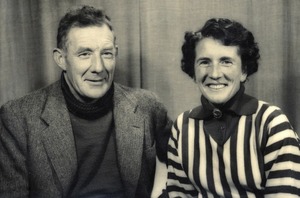 When he was seventeen he took charge of 460 cattle on a drive in early winter, cutting across the Pava ranges instead of going round. They were caught in a huge blizzard and had to use their troop of horses to break a trail for the cattle, so what should have taken them a week stretched to fifteen days. On that fifteenth day they managed to reach the top of little Mesa which was very narrow, and fourteen miles away below them they could see the farm they were heading for. They had to drive the cattle along for five miles before they found the ravine leading downwards, and it was blocked with snow. They realised that they and the animals would die if they remained there.

One of the other boys very bravely decided to try to break trail with his horse, and succeeded in doing so, but even so they encountered great difficulty in persuading their horse troop and the cattle to follow. Eventually the animals went down in single file, and their arrival at the farm was greeted with some horror, and astonishment that they had survived. 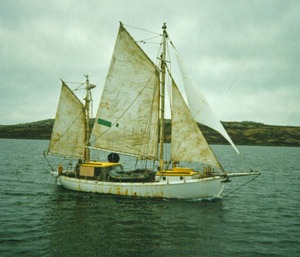 The Foam in Stanley Harbour in 1996

Bertrand came to the Falklands in 1928 and went to work at Roy Cove, where his father had been born, and where his uncle Howard Clement was manager.

He then spent a short time on Carcass Island working for Jason and Daisy Hansen before joining the sealing vessel Afterglow in 1930. He also worked on the post and communications ship Fleuris which ran between Stanley and South Georgia.

He joined the whaling fleet which went south in the summers, returning to the Falklands at the end of each whaling season when he would again join the Afterglow for the winter's sealing.

In 1931 Bertrand married Muriel (Dubbie) Newing, daughter of Henry and Elizabeth Newing. They had two daughters, Natalia Mfanwy Newing (b1933) and Yolanda Irene (b1938).

In 1935 Bertrand saved the life of Nevin McGill who fell from the sealing ship Bellville in Albermarle harbour, nearly losing his own life. The decks were covered in ice and McGill slipped and fell overboard. Bertrand jumped in after him in his heavy cold weather clothing and big sea boots, managing to catch hold of McGill, and to cling to the anchor chain until a rope was lowered. By the time McGill had been hauled back on deck and the rope lowered again, Bertrand was in dire straits. He was offered a lifesaving medal but refused the honour. 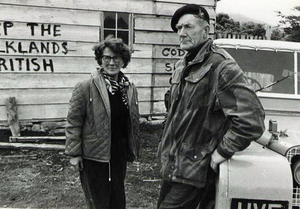 Bertrand left the Falklands in 1938 to take up a partnership in a fruit farm in Chile. The farm was completely destroyed in the earthquake of 1939, and the Bertrand family managed to get to Punta Arenas where Cecil worked on a sheep farm for a time.

He returned to the Falklands in 1940, and joined the SS Fitzroy during which time he held several positions, from stoker to steward to able seaman.He bought a share in the schooner Porvenir in 1944, and the following year took command - she was the last trading schooner to work around the Falklands, and carried general cargo, wool, and live animals to and from the farms and Stanley. 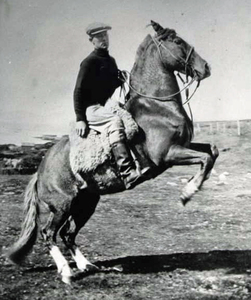 There were always two others besides Bertrand on the ship, one of whom was Bertrand's cousin, Roddy Napier. At one time the schooner was chartered by the British American Kelp Company to carry out experiments into the growth of kelp around the Islands. This very hard work was done in the autumn in cold, arduous conditions. The kelp was cut by hand three feet below the surface of the water, dragged into a dinghy and taken back to the ship to be weighed. In 1945 the Fitzroy was damaged at Triste Island and the Porvenir took over her wool-carrying commitments for a time.

Bertrand and his wife were divorced in 1947, and he married Kitty Napier in 1948. Later on he exchanged his share of the Porvenir for the lease of the Arch Islands and then in 1950 moved to East Island. 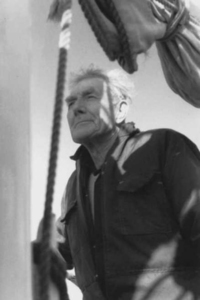 In 1953 the Bertrands bought Carcass Island from Mrs Hansen and settled down to breed Polwarth sheep.

In 1958 Bertrand bought the auxillary ketch Foam which had been built to his specifications in Denmark, and for many years Foam was a familiar sight around the Islands.

In 1974 the Bertrands sold Carcass Island to Robin McGill, but continued to live there until 1980 when they moved to Stanley.

Bertrand was a hunter turned conservationist. He was enormously respected by all who knew him, and in the Falklands tradition could turn his hand to anything. He was a big man, of huge physical strength. Although a farmer in later years, his skill and wisdom at sea in the most incredible storms was legendary.

He died on 9 December 1985 and is buried in Stanley cemetery where the wheel of the Porvenir forms the headstone of his grave.

From an extract from The Penguin News, dated January 1986: 'Cecil proved that it was possible to be a good farmer and a conservationist. Any work he undertook was always properly done from repairing the pintles and gudgeons on his ketch,to carving a wooden chain ... From the many letters which Kitty has received , a single phrase stands out, which so eloquently sums  Cecil's character - He was a rock on which one thought all the waves of life would break without harming him. He was indestructible.' 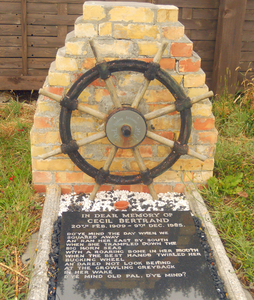 Doing some investigation on Erasmus Jones I found your article.

Para 8: He worked on the post and communications ship Fleurus....

Cecil Bertrand was my Uncle. My mother Yvonne being his younger sister.