Ingvald Martin Bryde was born at Sandefjord, Norway, on 11 August 1860, the son of ship-owner Johan Mauritz Bryde (1830-1899) and Karen Nicoline Eriksen (1837-1925). He went to sea at the age of 14 years and in 1878 secured his first mate’s certificate. In 1883 he became the manager for the whaling company Thekla which operated from Finnmark in North Norway and two years later took command of the fully-rigged ship Johanna. Thereafter Bryde worked for several Norwegian whaling companies operating from Finnmark and North Cape. 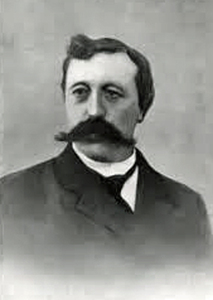 In 1905 he was engaged as manager on a whaling expedition to Spitsbergen in the barque Aviemore for the company Alfa and Beta.

In 1908 he joined the Sandefjord based merchant and shipowner Thor Dahl to form the whaling company Bryde & Dahl, with Bryde as whaling manager and Dahl as the administrator in Norway. The company obtained, following government approval, a whaling licence at South Georgia by securing for £1,500 Ernest SWINHOE’s licence from the South Georgia Exploration Company, of Punta Arenas. The company acquired a sailing vessel, the barque Aviemore which they operated as a factory ship together with a newly constructed whale catcher, the Edda.

When the expedition arrived at South Georgia in November 1908 it received a hostile reception from Captain CA LARSEN. Larsen was antagonized by Ingvald Bryde’s arrival, as Ingvald’s brother Johan (1858- 1925) had married into the Christensen family. Christen Christensen (1845-1923) was one of Norway’s largest whaling ship owners. He was also Larsen’s former employer when Larsen undertook the pioneering voyages to the Antarctic in the Jason in 1892-94, and to Larsen’s dismay had failed to support his venture south in 1904, when Larsen was forced to resort to Argentine capital. Christensen had, however, given Larsen a verbal assurance that he would not follow and compete with him at South Georgia, and Larsen considered Bryde’s arrival as a breach of a gentleman’s agreement. 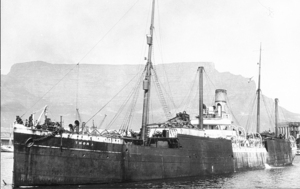 When Bryde arrived at South Georgia, Larsen tried to block his access to suitable harbours by attempting to secure leases from the government for the best harbours not then occupied. He also refused to allow Bryde to lay-up his catcher Edda at Grytviken at the end of the season. However, Bryde found a safe harbour at Godthul and in the following season he increased his catching capacity with a second, factory ship Admiralen and another new catcher, the Snorre. No land factory was ever built at Godthul; it was only used as a harbour for floating factories. In 1910 the company Bryde & Dahl purchased a large ship Thor I from British owners and converted her into a modern whale factory ship. It was to fulfil the requirements of the company until 1928, when the bay at Godthul was abandoned in favour of working along the ice-edge.

Ingvald Bryde appears to have forsaken the sea and active whaling after 1912, and he semi-retired to spend more time with his wife Nanna Zabina Klerk (1862-1942) from Sor-Varanger, Finnmark. He maintained an interest in various whaling companies as a shareholder, a member of company boards and office manager. After the First World War he served Lars Christensen's large whaling enterprise as an inspector and supervisor. Bryde was made a Knight of the Royal Norwegian Order of St. Olav.

Bryde died in Sandar, Sandefjord on 15 May 1931. He can claim to be one of the pioneer whalers at South Georgia, just as his brother Johan was in southern Africa in 1908. A species of baleen whale caught by Johan at Saldanha Bay, South Africa was identified as a distinct sub-species and given the scientific name Bryde’s whale Balaenoptera edeni brydei.