artist, was born in Edinburgh in 1862, the son of William Burn-Murdoch and his wife Jessie, née Mack.

He was educated at Oliphants Collegiate School and the University of Edinburgh, going on to study art at the Academy of Antwerp under Charles Duran and then at Florence, Naples and Madrid. He was nearly 30 and already an active painter by the time he met the explorer WS BRUCE. He came from a reasonably wealthy background and when Bruce met him was living 'in state' at Riddle Court in Edinburgh. Their friendship appears to have been instantaneous and when Bruce asked him to join him on the Dundee whaling expedition of 1892 he only gave Burn-Murdoch two days' notice of sailing (luckily they were both bachelors). 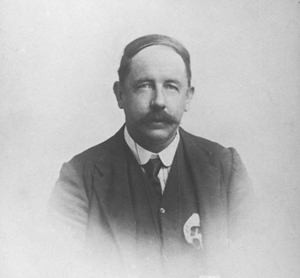 This expedition comprised three whalers - the Active, the Diana and the Balaena - on which Bruce and Burn-Murdoch were quartered.

He brought to this adventure the eyes of an artist and also a lively wit when describing events and scenery. There is an early description of Bruce performing his first operation after the Balaena had been hove to for 20 days in bad weather. Again, the first Christmas on the ice he described as 'a cold, dreamy, white Christmas morning, beautiful beyond description'.

Burn-Murdoch had some very descriptive passages: 'The appearance of a coast was to us very homely.' He went on to say that DARWIN must have written his bleak account of the Falklands when suffering from one of his frequent attacks of seasickness. In fact he thoroughly enjoyed the short visit, both for the wildfowling, the hospitality and his ability to play the tune The Perthshire Highlander on his pipes when walking through a potato patch. 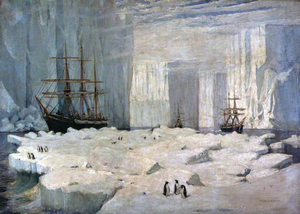 It is interesting to note that the expedition was not able to catch the fin whale as their harpoons and equipment were not sufficiently robust. He wrote: 'To try our harpoon on this finner, one might as well have tried a dry fly for the Scottish Express.'

Burn-Murdoch never went back to the Antarctic after his return home but he helped Bruce financially on more than one occasion, and when Bruce was unemployed he arranged for him to be manager of a whaling company based in the Seychelles. 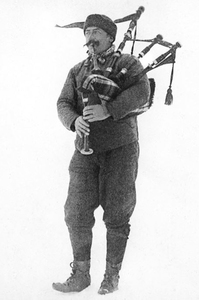 Bag pipes in the snow

Burn-Murdoch did not appear to exhibit widely because of his wealth and it is a pity that his drawings and pictures are not better known since his talents were considerable. His paintings and sketches in his book From Edinburgh to the Antarctic make it one of the best illustrated Antarctic books.

He married Jean Usher in 1897; they had no children.

See:  William Burn Murdoch; From Edinburgh to the Antarctic: an artist's notes and sketches during the Dundee Antarctic Expedition of 1892–93; Cambridge University Press; 1894

William Burn Murdoch; From Edinburgh to the Antarctic: an artist's notes and sketches during the Dundee Antarctic Expedition of 1892–93; Cambridge University Press; 1894 and 2010