shepherd, was born on West Falkland on 20 October 1880, the son of William John Cheek, a mason and carpenter, and his wife Elizabeth Emma, née Nixon.

At the age of eight, owing to an accident, he lost an arm, yet, in spite of this handicap, he learnt to perform all the duties of a shepherd with great efficiency, as well as being skilful at domestic chores such as cutting peat, wheeling a barrow and carrying a baby on horseback.

For most of his life he worked at Hill Cove, where, according to a contemporary tribute 'his sterling worth and loyalty were highly appreciated'. Here he met his wife, Minnie Tullett, who was originally from England. They married in 1906 and went to live at Teal River, where they had four children, Dorothy Elizabeth (1908), Frederick John (1911), Alfred Henry (1915) and Arthur Ernest (1917).

In addition to his other duties Frederick was the West Falkland postman and would ride around the settlements and camp houses delivering and collecting the mail. He would also help guide the doctor to various houses when required. 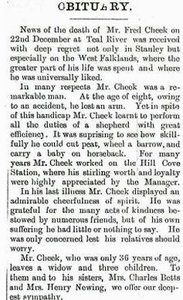 Unfortunately he contracted tuberculosis and died at Teal River on 22 December 1917 when his youngest child was only eight months old. His obituary states: 'News of the death of Mr Fred Cheek on 22nd December at Teal River was received with deep regret, not only in Stanley but especially on the West Falklands, where the greater part of his life was spent and where he was universally liked... Mr.Cheek was a remarkable man'. It goes on to say: 'In his last illness Mr Cheek displayed an admirable cheerfulness of spirit. He was grateful for the many acts of kindness bestowed by numerous friends, but of his own suffering he had little or nothing to say. He was only concerned lest his relatives should worry'.

Fred Cheek is remembered as a big, fair, very kindly man, loved by his family and all who knew him.