German sect leader, was born in Strasbourg (in Alsace, then German) on 19 December 1913, the second son of Alfred Cordier, a shopkeeper, and Rosa, née Schuessler.

He was educated at a grammar school in Esslingen, near Stuttgart. As a member of a Protestant youth organisation he had already shown a remarkable talent for leadership and a profound interest in reading and discussing the scriptures. After graduation he trained as an export merchant. Initially sympathizing with Hitler, he was soon disillusioned by the Nazis' hostile attitude towards religion and consequently joined the dissident branch of the Protestant church. During World War II he served as a corporal in the artillery and was seriously wounded. From 1947 to 1950 he worked as secretary for the YMCA in Pforzheim. 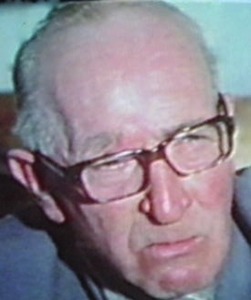 In 1948 he broke away from the Protestant Church and started preaching the Gospel. His aggressive rhetoric and religious radicalism made a tremendous impact on his audience. Eventually, some 80 of his adherents formed a group which became known as the 'Cordier Circle.'

Around 1953 Cordier was determined to leave Germany with his followers and find a remote place where he could establish a rural community based on collective property and devoted to hard manual work, the reading of the Bible and the worship of God. He placed an advertisement in The Times, which put him in contact with the managing director of the FIC, who subsequently travelled to Pforzheim to sign on members of the sect for five years. 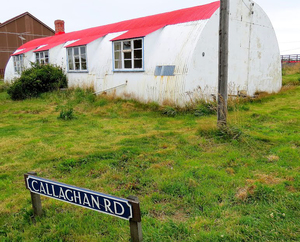 On 3 August 1954 the first party of 12 Germans, including Cordier, his wife and four daughters, arrived at Goose Green to work on FIC farms. Later that year government approached him, through the FIC, about the recruitment of 25 German labourers to be engaged for a period of three years on the Stanley roads project and the water filtration and pumping scheme. Interested in bringing in more members of his sect, Cordier soon submitted a list of the required number of workmen.

In July 1955 the road gang arrived at Stanley where they were accommodated in a place still called the German Camp. They proved an excellent workforce highly appreciated by government and Islanders.

Cordier had played a key role in the recruitment of contract labour from Germany in the 1950s, but relations with the authorities deteriorated following disputes over religious freedom. When he called on his men to quit specialist jobs and shepherding because they were contrary to the principles of his sect, the Germans at Goose Green stopped work on 27 November 1957 and moved to Stanley.

Cordier, his family and three of the faithful left for Argentina early in 1958. The majority of the road gang extended their contracts for one year, after Government had offered some financial incentives. They departed on 28 August 1959 and rejoined their leader at Paso Flores (Río Negro), where the community eventually settled.

Guillermo Alfredo Cordier, as he had come to call himself in later years, died on 19 February 1982 in El Maiten (Chubut) Argentina.