topographic surveyor, was born in Aberystwyth on 20 March 1932, the second son of David J M Evans and Nellie, née Barker. He was educated at Ardwyn County Grammar School and University College of Wales, Aberystwyth, obtaining a BSc degree in geography in 1952. 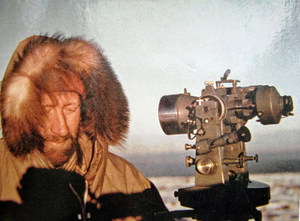 For national service between 1952-54 he was posted to Air Plans Section, RAF Ismailia in the Suez Canal Zone. On demobilisation he joined the Directorate of Colonial Surveys (DCS) as a colonial probationer at the School of Military Survey, Hermitage, Berkshire for 12 months of intensive practical field training. (The title DCS was changed to Directorate of Overseas Surveys (DOS) in June 1957).

In October 1956 Evans' first posting was to north western Uganda where he took part in the observing of the primary triangulation scheme between the borders of Sudan, the (then Belgian) Congo and the empty lands of the Elephant Sanctuary. This tour was followed by a posting to the Falklands. 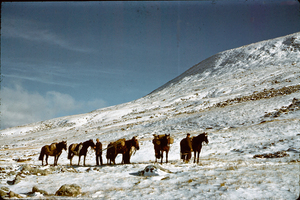 Evans arrived in Stanley in the RRS John Biscoe on 26 November 1957 joining George Reid, a senior DOS surveyor who had already arrived in August on the maiden voyage of the RMS Darwin. The Falklands was the last major classical triangulation scheme undertaken by DOS before the introduction of electronic measuring equipment in the late 1950s, and the field survey of the Falklands for 1:50,000 mapping followed the complete air photo cover flown in 1956.

Ideal weather conditions for angular observations by theodolite were rare, the wind being a constant enemy. It was necessary to camp close to most triangulation stations in order to take advantage of any break in the weather which might occur. Few such stations were completed in less than a week, while several required up to three weeks camping on the highest hills in adverse conditions of wind, low cloud, rain and snow. Both surveyors worked as individual units each with the invaluable help of an Islands horseman. 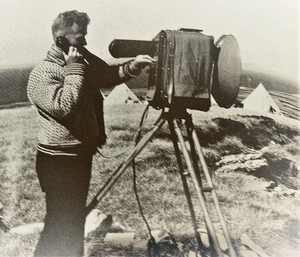 Observations were completed on East Falkland in December 1958, Evans working south of the line Mt Usborne/Mt Kent while Reid completed to the north.

On West Falkland, Evans observed the area from West Point  Island to Fox Bay while Reid took the southern camps and islands. The Land Rover was invaluable over Lafonia and much of the West, while horse travel with cargeros* was necessary on most of the major hills and wet Camp. Most of the available small ships, both farm vessels and the MV Philomel, were used to visit offshore islands.

In December 1959, HMS Protector' s helicopters made it possible to complete the survey of the Jason Islands in two days as part of a training exercise with FIDS* surveyors on their way to Antarctic bases. 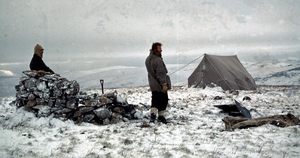 Generous Falklands hospitality was a feature of life, from a smoko in passing on the track to extended stays with managers and shepherds alike. Likewise help with workshops, stores and grazing for the horses. Place names for the maps as well as fence lines and gates not discernible on the air photos were collected on these occasions and while in Stanley during the winter months of July and August. These interludes made up for the rigours of camping in tents and the relative luxuries of shanties and empty houses. Observations on the West were completed in April 1960. 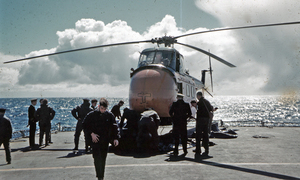 In 1962 Evans married Barbara Elsie Herriot Goldie, a marine biologist, who with their family of two sons and a daughter accompanied Evans on all his subsequent overseas postings. Barbara Evans (1934-2022) never visited the Falkland Islands, but she encouraged John Evans to record his experiences there and contributed many of the photographs which accompany this entry.