American explorer and sealer, was born in Stonington, Connecticut, on 16 July 1769, son of Gilbert Fanning and his wife Hulda, née Palmer.

He was named after his uncle, the British General Edmund Fanning, and went to sea as a cabin boy at the age of 14 in 1783 and, like his older brother Nathaniel of American Revolutionary War fame, was connected to the sea in one manner or another for the rest of his life. 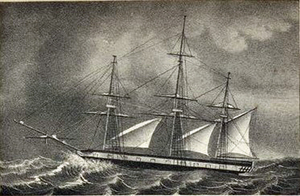 Aspasia took Fanning on a very...

Fanning reached the rank of mate by the age of 21 and when he first visited the Falkland Islands in 1792 as first mate aboard a sealing vessel his fate became inextricably linked with the tremendously profitable sealing industry and trade with China. A single cargo of fur seal skins from the Juan Fernandez Islands on the brig Betsey in 1798 resulted in trade goods that eventually sold for more than US$120,000 (equal to approximately US$1·6 million in present value). Fanning’s personal share of the cargo was $15,000.

It has been claimed that the sealing business seemed more like a gold rush when it was discovered that high prices for fur seal pelts could be obtained in Canton, China, and the profit used for buying goods that attracted even higher prices in Europe and the United States. This eventually led to the near extinction of the fur seal populations on the Falklands, South Georgia, the South Shetlands and and islands along the South American coast and around the sub-Antarctic. 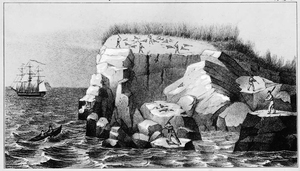 Fanning visited South Georgia in the 1800/01 summer aboard the armed ship Aspasia to take fur seals and his book Voyages around the world gives the first, very detailed, account of the fur sealing industry.

Aspasia obtained 57,000 skins which is the greatest number taken at South Georgia by a single ship. The vessel then proceeded to the island of St Mary’s (Santa María) off the coast of Chile to dry the skins in a more congenial climate before they were sold in Canton. Sealers had recognized the potential of the Chinese market and understood the Chinese desire for natural products that could be obtained for a relatively small investment. Fur seal, beaver, fox and rabbit skins, bêche de mer*, sandalwood, ginseng, pearls and the like were traded for commodities for sale on return to home ports: silks, porcelain, nankeen* and tea. 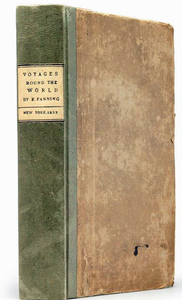 Fanning believed such trading would more than pay for the cost of any expedition mounted by the United States to search for new islands with seal colonies in high southern latitudes. In 1812 President James Madison put Fanning in command of two ships, Volunteer and Hope, which could have realized his dream of leading an expedition to the South Seas. This was an expedition to Fiji to collect ‘rare woods’, most likely sandalwood, bȇche de mer, pearls and other valuable commodities. It was not to be. War with Britain broke out and the expedition never sailed. While he participated in additional voyages for profit, his wish to participate in a major voyage of discovery went unfulfilled.

Fanning’s last voyage was aboard Sea Fox, which obtained fur seal skins and elephant seal oil from the Falklands and Tierra del Fuego, but he continued to broker sealing voyages from his home in New York and his familiarity with the Falklands led him to send his son, William, as supercargo* aboard the brig Hersilia in 1818 to search for the reported Aurora Islands to the east and south of the Falklands. After calling in at the Falklands for food and water, they rediscovered Shag Rocks, about 100 miles west-north-west of South Georgia. They proceeded to the newly-discovered South Shetland Islands where they took 8868 fur seal pelts.

In 1820, Fanning and company sent out the Fanning-Pendleton fleet. In addition to Hersilia, there were Frederick, captained by Benjamin Pendleton, Express, Free Gift and the little sloop Hero, captained by Nathaniel Palmer, one of the three claimants to the discovery of the Antarctic continent.

After stopping for 10 days in Berkeley Sound in the Falklands, they visited Isla de los Estados and the South Shetlands. The next expedition mounted by Fanning to the South was the Pendleton-Palmer fleet of Seraph, Annawan and Penguin in 1829. It was a financial disaster and he attempted more than once to claim reimbursement from the United States Congress but he was rebuffed on each occasion. 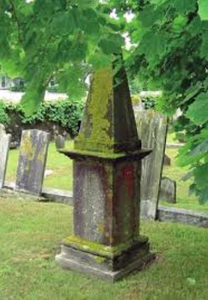 This did not, however, dampen his spirits for exploration. Some claim that the Wilkes Exploring Expedition of 1838-42 was a direct result of the publication of Fanning's Voyages Round the World in 1833. While he was not invited to participate in this expedition, he did petition Congress once more for funds in 1840 in hopes of leading his own expedition. Congress turned him down and he died at the age of 71 the next year on 23 April 1841 in New York, following his wife to the grave by less than one week.

Fanning played the roles of mariner, explorer, businessman, propagandist and investor in his pursuit of exploiting the far-flung reaches of the world's oceans for personal and national gain. He has given his name to Fanning Head near Port San Carlos on East Falkland, Fanning Ridge on South Georgia, Cape Fanning on the Antarctic Peninsula and Fanning Island (Tabuaeran or Tahanea)in Kiribati.