Robert Greenshields, the original colonist (1829-1878), was born in Howgate, Carmichael, Lanarkshire on 11 December 1829, the second son of the six children of Thomas Robert Greenshields and Elizabeth, née Gold. He seems to have spent his early adult life farming in Argyll - he was a reasonably prosperous shepherd in the 1861 census. In 1855 he married Elizabeth Patterson and by 1865 they had six children Jane (b1855), James (b1856), Robert (b1858), Thomas (b1860), Elizabeth (b1862) and Margaret (b1865). Greenshields had moved to England to farm at Grimsthorpe Park in Lincolnshire when he was engaged by the Falkland Islands Company on a five-year contract as part of a strategy to increase their investment in sheep-farming. At a board meeting on 22 February 1865 the directors of the FIC had resolved 'that a competent man be immediately engaged, at a salary not exceeding £200 per annum, to proceed to the Falklands and take general superintendence and management of the Company's sheep and four or five qualified shepherds be engaged to accompany him'. At their meeting on 6 July the managing director 'read testimonials in favour of Mr. Robert Greenshields for the office of Flockmaster at the Falklands ... the Managing Director reported having had a long conversation with this man and believed him to be a very suitable candidate'. At the following meeting on 14 July: 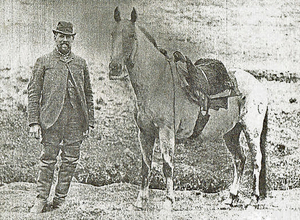 The Managing Director informed the Board that according to its desire Mr. Robt. Greenshields was offered and had accepted the appointment of Flockmaster at the Falklands and will sail in the 'Julie Tatham' upon the understanding sanctioned by the Board to receive a gratuity of £20 for thus expediting his departure, his salary to be £150 a year with the usual conditions as to House accommodation, Meat and Passages. And upon stipulation, which was conceded, of his receiving £40 advance of salary for his Outfit and his wife being paid £8 a month on account from his salary from 1st September till she is found a passage for Stanley.

Greenshields sailed with his son James on board the Julie Tatham on 21 July 1865, arriving in Stanley on 22 September. In February of the following year his wife Elizabeth, accompanied by their remaining children, sailed from London on the ship Matilda, chartered by the FIC, arriving in Stanley on 27 April. The family went to live at Darwin Harbour and their seventh child, William, was born in 1867. 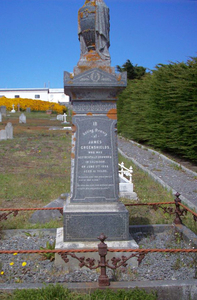 Greenshields had arrived at a difficult period in the Company's sheep-farming enterprise. The flocks were ravaged by scab* and there were far too few shepherds to carry out the necessary work of looking after the animals. Losses were becoming unsustainable and Greenshields was expected to reverse the trend in a short time. In 1867 FE COBB arrived to replace James LANE as colonial manager for the FIC and was not impressed by Greenshields' management skills. 'His lenient way of treating the men, "softness" is the only word for it,' wrote Cobb, ' is beginning to irritate me and I see it leading to an utter disregard of his authority among the rougher class in the Camp'. In April 1868 he proposed to the directors that Greenshields be replaced by William Wickham BERTRAND, newly-arrived from New Zealand, with experience of dealing with scab and moreover 'a sharp decided character, giving the impression that he would stand very little nonsense from his shepherds'. In fact Cobb shortly thereafter made the exchange without waiting for permission from London, allowing Greenshields 'to take the 2nd Corral (Salvador) on shares' by way of compensation.

However on parting from the FIC, Greenshields immediately took up a section of land north of the San Carlos River on his own account, signing the first 'licence to occupy' on 4 August 1868. In November 1869 Robert and Elizabeth Greenshields had a fifth son, John, by which time Robert had already built a house on the land and stocked it. By some curious provision of the law, he was also able to take out leases on further sections in the names of his sons James and Thomas, although they were still only 13 and 9 years old respectively. By 1871 he had the leases on seven adjoining sections of the North Camp, which he collectively named 'Howgate Station' after his birthplace, although it was later renamed 'Douglas Station' after another village near Carmichael. In the same year he also took a lease on land at Horseshoe Bay. His holdings eventually totalled some 130,000 acres. However a family tragedy marred their success, when their second son Robert died of consumption (tuberculosis) on 13 October 1871, aged only thirteen. They went on to have a further three children: Robert (b1874), George (b1875) and Alexander (b1877). 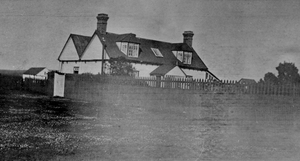 The elder Robert Greenshields himself died soon after Alexander's birth, on 18 October 1878 of liver disease. He was only 48 years old. In his will, made four days before his death, he left his estate in equal shares to his wife and all his surviving children, adding 'It is my wish that my wife Elizabeth Patterson Greenshields and my eldest son the aforesaid James Greenshields do carry on the business of sheep farming until the youngest child come of age'. James Greenshields duly took over the running of the farm. He was made a JP in 1892. In 1893 he married Isabella Shirlaw in Scotland and in 1894 they had a son, whom they christened Robert. In 1896 James Greenshields lost right arm in an accident lasooing a bullock, but continued to farm with as much energy as before. However he too died young. He was drowned with nine others, when a cutter in which they were travelling from Horseshoe Bay to Douglas Station (as the farm was known by then) disappeared in Salvador Water in June of 1898. His body was not found until six months later and he was buried in Stanley Cemetery. The Church Magazine noted that 'the Islands have lost a good master and a most successful farmer'.

James had latterly been assisted in the management of the farm by his younger brother George, who took over the reins on James' death. Time had left the family sadly depleted. William had died in 1883 aged 16, Elizabeth in 1885 aged 22, Robert in 1888 aged 14 and Margaret in 1889 aged 24. Thomas had moved to Patagonia to farm there, as had Jane and her husband William Douglas, but both Jane and Thomas died in 1899. George was made a JP in 1905 and in 1916 he married Annie Louisa Benney. Her father William Benney, late owner of Saunders Island, had travelled out to the Falklands in 1865 on the same ship as George's father, Robert. In 1917 Robert Greenshield's widow, Elizabeth, died in London aged 80, leaving the considerable sum of £15,000. 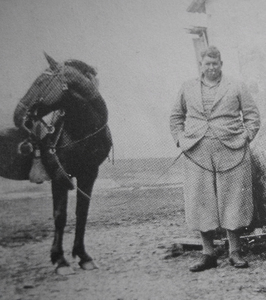 By this time James's son Robert had returned to the Falklands from Britain, where he had been educated, with a view to taking over the farm. Robert married Malvina Thomas in Stanley Cathedral on 9 November 1921 and they had two sons, Robert James Thomas (b1923) and Harland (b1928). Robert senior was a keen member of the Falkland Islands Defence Force and Chairman of the Stanley Sports Association. He was made a JP in 1928 and at the outbreak of World War II was promoted to captain in the FIDF and put in charge of the mounted infantry. He was also Aide de Camp to the governor throughout the war years. He died in 1947. Harland Greenshields, great-grandson of the original Robert Greenshields, eventually took over management of Douglas Station, but sold it in the 1970s. In the 1980s it was subdivided, like many other large Falklands properties. Harland died on his farm in Wales in 1999 and his ashes were flown back to the Islands for burial.

When was Robert made an ADC to the Governor? My research indicates he travelled to South Georgia aboard HMS Ajax in January 1937, and I understand his role on the visit was as Governor's ADC.
DFB Editor writes: The Falkland Islands National Archivist, states that all the Government Gazettes are available on the Jane Cameron National Archives website. The FI Gazette of 3 January 1939 records that Lieutenant R Greenshields was appointed an extra ADC to the Governor on 22 December 1938.