FIC manager, was born at Banbury, Oxon on 16 April 1845, one of ten children of Edward Cobb , a banker, and Octavia Cobb, née Piper.

He attended University College School at Oxford. The earliest photograph of him at the age of 18 shows him bewhiskered and looking older than his years. His early training in an East Indian office gave him a sound knowledge of accounts and administration and he was appointed Colonial Manager of the Falkland Islands Company at the age of 22, a remarkable and enlightened decision by the Board of Directors in London (one of whom was an uncle), made at a time when the Company was struggling to establish itself. It took him 57 days to travel to the Falklands, the final stage being a journey from Montevideo to Port Stanley in the small schooner Foam, an experience which he later remarked was one that he would willingly have foregone. 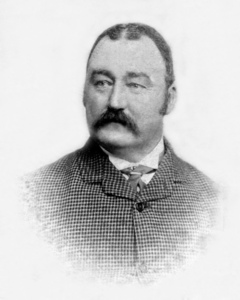 Cobb  arrived at Port Stanley on 6 August 1867 and the Board in London only learned of his safe arrival four months after he set out.

It was his disagreeable first task to dismiss the incumbent manager James LANE who left the Islands at the next opportunity on 1 September 1867. For the first month Cobb was entirely alone in the Company's office and he quickly realised that of the two principal businesses, retailing and farming, it was the latter which must be the focal point for the Company's future prosperity. Although ostensibly senior to the Camp manager, a Scotsman, Cobb knew that interference with him and his policies would not be countenanced by the Board. Nonetheless, Cobb formed the view that the Board's confidence was misplaced and that the Camp manager was not competent to hold such a responsible position. Cobb was particularly concerned over the problem of scab* for which the manager's policy of dressing the sheep with hot penguin oil and tar was proving disastrous for sheep survival and the growing of wool. When a group of sheep farmers arrived in the Falkland Islands prospecting for land and opportunities, Cobb negotiated a contract with one of them, Wickham BERTRAND, and dismissed the Camp manager. Cobb realised that he had jeopardised his own position and he was duly censured by the Board for not consulting them beforehand but his reasons were upheld and the decision proved wholly justified. Bertrand had dips constructed and in 1869 the entire flock was dipped in a mixture of tobacco and sulphur which brought about a marked immediate improvement and the eventual elimination of scab. Flocks quickly expanded rising from 22,000 in 1868 to over 200,000 in the 1890s.

Bertrand left after two years in 1870 to farm elsewhere in the colony whereupon Cobb assumed direct control of sheep farming, moving to the Company's main farming headquarters at Darwin although retaining overall control as colonial manager, a dual appointment unique in the Company's long history. He was a man of culture and he took great pleasure in writing forthright letters to the Board in London, even writing about such mundane matters as pillows, describing one recent consignment as showing an economy of feathers. 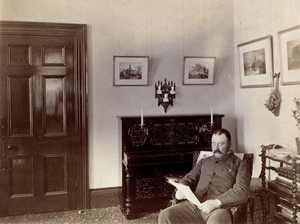 93 Cobb at home in Stanley

Cobb  married a West Country girl Emily Blake in April 1873, a happy and successful union for both himself and the Falklands, for Emily's brother Robert BLAKE joined her in the Islands and established himself in partnership with Ernest HOLMESTED, a very successful sheep farmer at Hill Cove, West Falkland. The Cobbs had three children: Florence Emily (b1874), Ethel Winifred (b1874) and Arthur Frederick COBB (b1877). Two of Cobb's brothers, Henry and George, came out and farmed for many years at Lively Island. Some sensitivity existed within the Company over the granting of leases to members of his family, but FE Cobb prevailed. As the sheep farming business grew, Cobb relinquished the farm management in 1889.

One vitally important responsibility was shipping, over which he clashed with governors on policy, one of them, CALLAGHAN, declaring that Cobb was not in favour of steam, a palpable nonsense. The Company had long been urging the Liverpool based Pacific Steam Navigation Company to extend its service to the West Coast of South America on to the Falklands, with Cobb securing promises from independent farming clients to ship their wool with the Company's on steamers calling at Port Stanley. PSNC were not, however, interested at the time although under pressure they did submit a price which was clearly intended for rejection. Cobb engineered the introduction of steam communication for the Islands in 1880 although the governor claimed the credit for it. 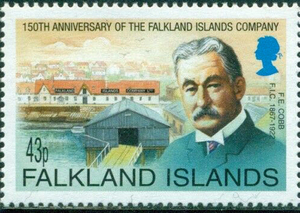 The Company held talks in London with the German Line Kosmos and following this one of their ships called at Port Stanley where Cobb negotiated a deal with them, subject to Board approval in London, for the carriage of cargo to and from England. A mail contract was then entered into with the Falkland Islands Government which lasted for 20 years. It would not have been concluded without the Company's support, as the mail contract payment did not even cover the cost of diversion. Cobb always defended the Company against any accusations of unfair monopoly by pointing out that it had voluntarily relinquished the external shipping monopoly in the Colony's overall interests.

Cobb had earlier clashed with the governor over the mail subsidy which was intended to fund external journeys to Montevideo by the Company's schooner Black Hawk. The Company was making increasing losses on shipping and Cobb was determined to stop this but the governor refused to increase the subsidy. Cobb therefore gave six months notice of termination of the mail contract which would give the Company the flexibility of external movement it required, the schooner having been occupied for 275 days on the external mail service in 1879, about 55 days per round voyage. The Government passed legislation in February 1880 requiring the masters of all vessels to carry mail for a fee of 1d. per letter which would have entailed a payment to the Company of less than £25 for a voyage to Montevideo, a derisory amount. In March Cobb sent the Black Hawk to Montevideo and instructed the master not to accept mail for the Falklands unless an adequate sum was paid for the service. Cobb meanwhile had arranged for the Company's mail to be sent to its agent in Montevideo for collection. When the Company's agent proposed a fee of £150 for the round trip the British Vice Consul in the city telegraphed home recommending approval, holding the vessel pending a response. The governor intervened, however, and arranged for the German vessel Ramses to divert to Port Stanley with the mail en route to Valparaiso in Chile, paying £150 for this rather than accede to the Company. The Company wrote to the Colonial Office declaring that Governor Callaghan had acted in a very high-handed manner in the mail service negotiations but the minister expressed his support for the governor although subsequent release of the papers to the public show a marginal note 'The Governor has misled us'. The governor's term of office was up and Cobb in 1880 had achieved his main objectives: introducing a steam shipping service; and stemming the Company's shipping losses. He was a happy man. His feelings about governors at the time are reflected in his belief that the farmer who gave the fattest lambs to Government House was most likely to find favour. 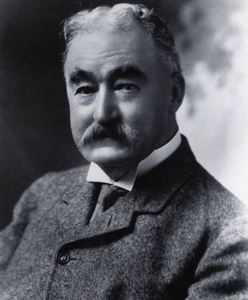 Cobb continued his work in establishing the Company's financial position. The sheep flocks were expanding and had reached 100,000 by 1880, the retailing and ship repairing businesses were trading profitably after the takeover of the principal competitor, JM Dean and Sons, following Cobb's initiative when he learned in Montevideo of the death of the principal George DEAN.

It is interesting to observe that until the Company was itself taken over in 1972 there was always a member of the Cobb family on the Board and until the 1950s, a Dean. Cobb believed that meat processing would not be profitable because of the comparatively low numbers available, a lesson which the Colonial Development Corporation learned in costly fashion in the aftermath of World War II. Instead, Cobb had a boiling down plant built for surplus sheep and created a useful market in tallow. In 1880 too, 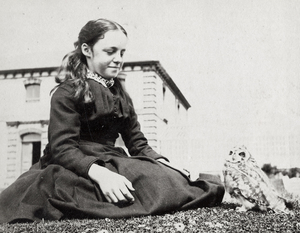 Cobb personally built a telephone line between his house and the office in Stanley, the first in the colony. He would have responded vigorously perhaps to the first date given inaccurately in relation to the recent issue of commemorative stamps but not as vigorously as his response to the inaccuracies in VF BOYSON's book on the Falklands.

In 1890 Cobb was an established figure in the Falklands, well respected for his achievements in securing the future of the Colony as well as being personally liked. He had boundless energy and was more interested in his work than its rewards, something which sets him apart from today's entrepreneurs. His frustration over managing an organization 7,000 miles away from the controlling Board of Directors in London and subject to their approval on important policy matters finally came to a head in 1891 when he resigned, ostensibly because of the failure of the Company's secretary to send him a copy of the Company's published report and accounts and his newspapers 'without which life here would not be worth living'. 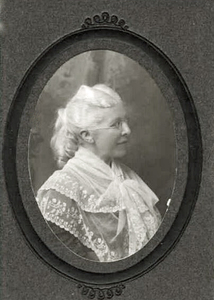 Upon his return to England the Board did the only thing they could do - they offered him the managing directorship which Cobb accepted. His first action was to dismiss the Company secretary which was perhaps a little harsh because he was a hard working, conscientious man. His subsequent years until retirement in 1914 were less confrontational but nonetheless successful, placing the Company on a sound basis.

From the eyes of his successors as colonial manager Cobb suffered from the same shortcomings as he himself had complained about, restriction of funds for development, limited delegation of authority and failure to listen to arguments. The Company continued to prosper however, undoubtedly assisted by his appointment of a highly successful and popular colonial manager, WA HARDING, who served during most of Cobb's time as managing director. 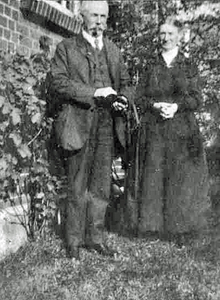 Cobb became chairman of the Company in 1914 and served until his final retirement in 1922 during which time he introduced a policy of switching to finer wool in response to market demand resulting, in 1923, in the Company topping the London wool market.

In retirement in Sussex, Cobb served, as a director of Holmested Blake & Co of Hill Cove with his brother-in-law, Robert BLAKE, until his death on 27 October 1934. Cobb was a man of his time, maturing during the Victorian era of expansion and development of the British Empire, fostered by the creation of Royal Chartered Companies whose unique powers attracted financial backing. Cobb dominated Falkland Islands Company affairs from 1867 when he became colonial manager to 1922 when he retired from the chairmanship in London. The minutes of the Board meeting of the Falkland Islands Company for 7 November 1934 record on his death:

to him more than to any other man is due the credit for the successful development and progress of the Company during the forty-seven years he was actively associated with its management in the Colony and in London.

He is commemorated by his portrait on a stamp in the FIC's one hundred and fiftieth anniversary set in 2002.