colonist, was born in Taunton, Somerset in 1851, the fifth child of nine of William Blake and Fanny Follet Osler Blake, née Browne, a strong Unitarian family with a background in medicine, law and farming. 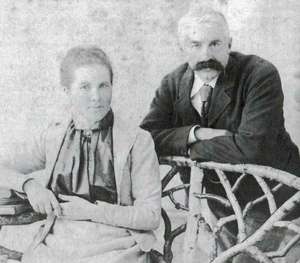 He was a resolute and adventurous young man, the lively one of the family whose restlessness got him involved in conflict with authority and with fellow students at boarding school where he chafed at the discipline. A short period in Munich studying engineering was followed by further engineering studies in Manchester in 1871 but the profession did not appeal to him and he returned home to Somerset the following year. It was at that stage that an event occurred which was to transform his life.

In March 1873 the Colonial Manager of the Falkland Islands Company, Frederick COBB, himself only 27, arrived from the Falkland Islands to marry Blake's sister Emily. Cobb had assumed his important and prestigious position at the remarkably young age of 22 and he regaled the family with stories of his life in the remote islands and the challenges faced by the early settlers. He suggested to Blake that he should accompany the newly married couple and try his hand at sheep farming, initially at the Company's principal farm at Darwin and later to explore opportunities for farming in his own right. This idea greatly appealed to Blake and with the blessing of his parents he sailed to the Falklands on 9 May 1873. Following a few days in Stanley Blake rode with Cobb to Darwin to spend a few months there as a cadet. Meanwhile, Ernest HOLMESTED, a pioneer sheep farmer on West Falkland, visited Stanley where he was impressed with the hospitality and welcome of the Cobbs and particularly of Emily, a charming and thoughtful hostess. Learning of Blake's ambitions he invited him to Shallow Bay, West Falkland. 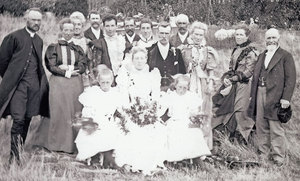 Blake arrived there in mid December 1873 and was immediately plunged into the busy farming season, with fine weather and different landscape from Lafonia, providing him with the stimulation and outlet for his energy which he had been seeking. An opportunity soon arose for him to invest in farmland when Holmested's partner Rees decided to sell his interest and offered it to Blake. He accepted with alacrity and on 31 January 1874 he became the partner of Ernest Holmested in what was to become a highly successful sheep farm and an enduring and harmonious relationship between the two families lasting more than a century. Holmested was impressed with Blake, his drive and ability to handle men, but decided to test him out by leaving him in charge for a couple of months despite his youth, being just 23. The plan was fully successful despite Blake's apprehension.

The development of West Falkland for sheep farming took place later than on the East and there was much to do for the two men: new livestock to be imported, new buildings to be erected, a workforce to be recruited and stabilised and fencing and land improvements to be carried out. It is surprising that these two young men should share a small dwelling with relative equanimity despite their differences in outlook. They were reputed to be the hardest workers on West Falkland. They survived the vicissitudes of the wool market, probably with help from home, and on 14 March 1880 Robert sailed for Stanley by schooner en route to England and the family home in Somerset. During his visit he stayed with the Herford family in Manchester, also Unitarians, whom he had got to know during his engineering course, and whilst there proposed marriage to the elder daughter Dorothea who was two years his junior. They were not to marry, however, until 14 July 1881 mainly because Holmested's own marital arrangements had taken precedence. The couple arrived at Shallow Bay on 26 November 1881, having journeyed from Montevideo on a Kosmos Line ship, and soon got to work on their new home at Hill Cove which was to be the principal settlement of the farm for over 100 years. 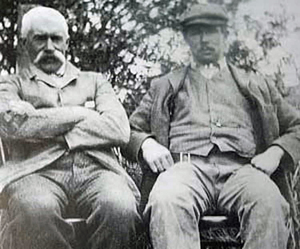 By 1888 the farm was shearing 25,000 sheep and Blake had enhanced his reputation for breeding rams. Other matters such as land drainage needed constant attention, much of the work being carried out by contract workers from the West Country.

Blake was a pioneer of forestry in the Falklands and indeed it was his abiding hobby. During the 1890s he planted Corsican Pine and Southern Beech at Hill Cove and in the 1920s he extended his plantations with the help of James REID from Kew Gardens. 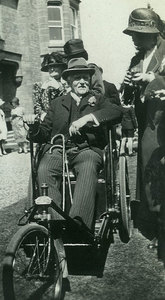 Following the successful appointment of Sydney Miller as farm manager, Blake returned to Somerset early in 1892. He had delayed his own return to look at prospects in San Julian, Argentina where two former shepherds were struggling to establish sheep farms and had asked for his help, particularly with capital for livestock and buildings. A shipment of sheep had already been successfully made to San Julian and Blake was determined to view the surrounding land before committing himself to invest. The two shepherds had leased land and Blake, approving of the sheltered valley they were farming, agreed to enter into partnership with them whilst initiating the purchase of the land.

Following his return to England he became involved in ordering the materials for San Julian and realised that he needed to supervise the work. He left for the Falklands late in the year, arriving just before Christmas and planning to spend a few weeks there before leaving for San Julian where his experience and organisational skills would be needed if the venture was to be established on a more commercial basis. His stay at Hill Cove, though brief, was most enjoyable because he could relax in the knowledge that the farm was being managed by the highly competent Sydney Miller. 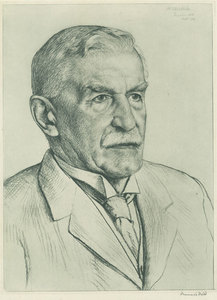 A portrait of Robert Blake Snr. that...

At this time Blake became involved with other sheep farmers in a bitter confrontation over the plans of Governor GOLDSWORTHY (instructed by the Colonial Office) for land reform, with Blake joining his fellow farmers in refusing to serve as a Justice of the Peace. Hill Cove, as with many other farms, was at the time held under a government lease and the possibility that the lease would not be renewed following many years of physical struggle and capital investment was strongly resented. It is interesting in the light of current land developments that Blake, when expressing his relief at the subsequent lease renewals, stated that the prevailing view among the workforce was that if the land were subdivided the small farmers would employ less labour and the men would be worked harder.

There is no doubt that Blake enjoyed the new challenge he faced at San Julian although he increasingly missed his wife and family. He also missed the hilly landscape of West Falkland, disliking the flat plains of Patagonia. He became physically involved in the construction of farm buildings such as a wool shed and dip, there being no other outlet for his energies. 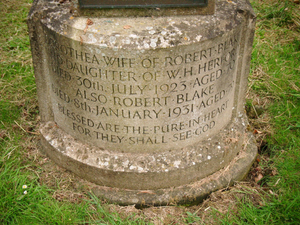 He returned to England in February 1894 where, after a short while in Manchester where Emily Cobb had settled with her children near to her own family, they returned to Paignton. Blake became increasingly restless to return to Hill Cove however, and pleading financial difficulty in keeping a large family in England following substantial investment in Patagonia persuaded Dora to return with him, leaving the two elder children at boarding school. They returned to the Islands in October but his return to Hill Cove was beset with problems which would not have been resolved by lesser men than Robert Blake and Sydney Miller. Miller's appointment had been outstandingly successful and he had moved with his wife and young child into the house vacated by the Blakes so that the latter faced disruption to both their home and working lives.

The question of the lease renewal had been discussed with Blake by the Colonial Office shortly before he left England and he was advised that the lease would be renewed subject to the surrender of 10,000 acres of land at Coast Ridge. However, the land reform ideas collapsed and leases were renewed. It was at this stage that the unique solidarity of West Falkland farmers was probably born, manifesting itself not only in farming matters but in such issues as medical and mail services. 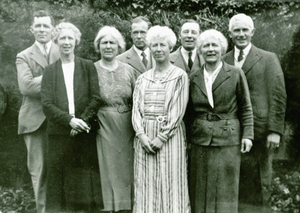 Blake had promised his wife that they would return to England in 1898 to settle and although he was sorely tempted to accept an invitation from FE Cobb, his brother-in-law and the managing director of the Falkland Islands Company, to manage the company's farms, he declined but consented to spend a few months at Darwin to formulate plans.

They were well received, and culminated in Blake being invited to join the board in London upon his return. From that time onwards until the Company was taken over in 1972 there was always a Blake on the board, and they made regular visits to San Julian, Hill Cove and the Company farms.

Today the Blake family is still represented in the Falklands although Hill Cove farm has been sold and subdivided.

This is so very interesting to me. Robert and Dora Blake are my great-grandparents. I am the grand-daughter of Elizabeth Fanny Blake-Currey. My mother was Joan Elizabeth Currey, eldest daughter of Elsie and James Currey. Joan married Roy Lent at Vermilion, Alberta in 1933. It's so interesting to be able to search a bit further back in the family line.