governor, was born in London on 20 June 1839, the second son of Thomas Goldsworthy, an attorney with connections in Calcutta, and his wife (and cousin), Sophia, née Tuckfield. He was educated at small private schools in London and in 1854 entered Sandhurst. After a successful year, he fell sick and decided to join the army in India where his family then were. 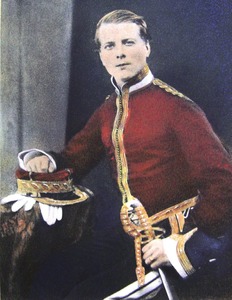 After the Indian Mutiny broke out, Goldsworthy joined Havelock's Volunteer Cavalry, a scratch unit of a score or so, and saw action at the relief of Cawnpore {Kanpur} and the defence of Lucknow. Goldsworthy was gazetted into the XVII Lancers and returned to England with them in 1865, but service in a cavalry regiment required a private income which he lacked. So in 1867 he took a post in Sierra Leone as Inspector of Police.

In 1869 he married a widow with two children, Lisa Egan, in Woolwich. He was then recruited by the governor of Lagos to become commandant of the Hausa Police. He was sent on several military/diplomatic missions to the interior and moved to the neighbouring colony of Gold Coast {Ghana} as deputy commissioner at Accra. During the Sixth Ashanti War, he was engaged in several battles and was wounded in the hand, returning to England to convalesce. 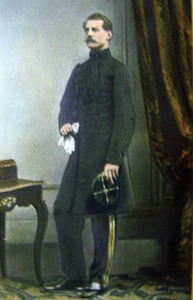 In 1876 he was offered the presidency of the Caribbean colony of Nevis and in 1877 appointed colonial secretary in Western Australia, where he promoted the exploration of the north of the colony. A further Caribbean posting followed in St Lucia and in 1884 he was sent as governor designate to British Honduras. 'I think him one of the most energetic and efficient of our minor administrators' wrote the permanent secretary at the Colonial Office. He spent four years in Belize and was in dispute with the leading commercial company in the colony.

In 1891 he was posted as governor to the Falkland Islands and he and his wife arrived in Stanley in January 1891. His time in the Falklands was dominated by the land issue - the contest between the two dozen major landowners who were reluctant to part with any of their acres and those, led by Goldsworthy, who hoped to see land made available to colonists who sought opportunities to better themselves. His predecessor Governor KERR had sold land on generous terms to the leaseholders and when Goldsworthy attempted to impose a proper survey on the farms (whose extent was grossly underestimated in their leases) in the hope of releasing two million or so surplus acres, he met with stubborn resistance from the landowners, who collectively resigned their positions as Justices of the Peace. This was a challenge he could not overcome and he effectively backed down, leaving emigration to Patagonia as the only option for ambitious colonists. 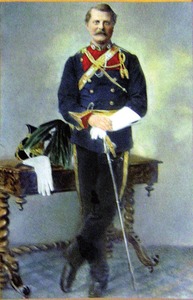 The colony's sheep flock reached its greatest size in Goldsworthy's time, increasing from half a million to 807,000 head. Scab* remained a problem and three stock inspectors were introduced from New Zealand to control the infection.

The Falkland Islands Volunteer Force was founded by Goldsworthy following the arrival in Stanley harbour in June 1891 of a Chilean vessel, the Maipu, laden with armed insurgents who were engaged in a civil war. As the colony was defenceless, he summoned help from the navy and recruited and armed his volunteers, ensuring that henceforward there would always be a local defence force in the Islands. 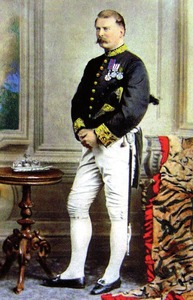 Goldsworthy's wife returned to England soon after his arrival and those in the Islands who were opposed to his policies hinted that he was too familiar with too many people. Certainly he is remembered for the after-dinner games of 'Coo-ee', which were played in Government House - apparently a variety of 'postman's knock'.

He was a governor with remarkably wide imperial experience and one who made a spirited attempt to broaden the ownership of land in the Islands - but failed.