surveyor. Arthur Bailey was born in Bedford on 27 June 1819, the son of Charles Bailey and Anne, and christened at St Mary's Bedford on 23 July. He served on the Ordnance Survey of England under Captain Colby RE from 1835-1841. In 1841 he was appointed assistant surveyor to the expedition sent to New Zealand under Mr Ligaer and served in that post until 1848. He was then appointed surveyor-general of the Falkland Islands at a salary of £350 and probably arrived with Governor RENNIE on the transport Nautilus in June 1848. A minute from Rennie dated 27 October 1848 expresses disappointment at his inability to construct roads and buildings. In reply Bailey blamed the poor quality of workmen in the colony. 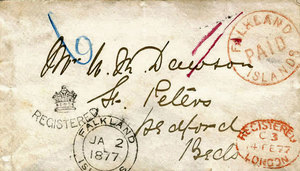 In the Falklands census of 1851 he is described as married with two children. His wife was Marie-Louise (also spelt Louisa) née Lovelige and they had two daughters, Madeline Jane (b1848) and Agnes who died aged 4 weeks on 24 October 1850. His wife died about two weeks later on 5 November. A despatch from Governor Rennie in 1851 noted that Bailey and his daughter were desolate and he was sent on one year's leave. He married again on 7 April 1868 to Elizabeth, formerly Horrocks. They had seven children in the Falklands, all except three of whom seem to have died in infancy, although the records are not entirely clear. Elizabeth herself died in 1877, aged only 25.

Governor MOORE suspended Bailey for discharging a pistol in the settlement and for insulting conduct, but this incident does not appear to have harmed his career. In July 1859 Bailey accompanied the colonial secretary James LONGDEN on a tour of the North Camp counting cattle - they reckoned that about 6,000 wild cattle remained and commented: 'the cattle are increasing again fast and there is abundance of pasture especially in the districts which have been chiefly seats of operations of Mr Lafone and the Company.' In 1861 Moore instructed him to use his authority as a JP to sort out a dispute between the lessees of New Island and the captain of a French brig who was illegally slaughtering penguins. The surveyor post was closed in 1873, and Bailey was appointed coroner, registrar-general and receiver of wrecks in 1875 and police magistrate in 1878. He administered the government during Governor CALLAGHAN's leave in 1878. His term was not a success: on his return Callaghan wrote: 'I found that a decided reaction had set in against the recent policy of the government, and this I fear greatly owing to Mr Bailey, who from his long residence here has become too subject to local influences to be able to withstand the strong pressure put upon him'. In July 1879 Callaghan told the Colonial Office that he was unwilling to devolve government on Bailey again. 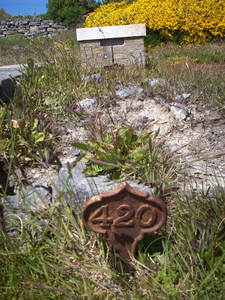 He died on 14 September 1883, and was buried in Stanley Cemetery, as were both his wives and four or five of his nine children. In a despatch Governor KERR noted his death after a short illness, adding 'Mr Bailey was a very old and meritorious public officer of this Colony'. Despite his personal sorrows, he had indeed provided experience and continuity to the infant colony though he had failed to rise to the occasion when he acted as governor.