governor and explorer, was born in Brompton, Chatham, Kent, probably in 1820. He entered the Royal Navy as a volunteer of the first class on 19 October 1833 and as a career naval officer spent twelve years as mate of the Terror (Captain FRM CROZIER) during the expedition of Captain James Clark ROSS. Subsequently he was skipper of the hired 362 ton barque Pagoda, surveying the Antarctic from Bouvet Island to Enderby Land and Queen Mary Land. Finally in 1847, he commanded HMS Plover in a five year search for the disastrous Franklin expedition lost in the North West Passage. Moore called at Stanley in May 1848 on his way round the Horn to Alaska and directed several peremptory requests for assistance to Governor MOODY. While in the Arctic, Moore had been promoted commander and soon after his return in 1852 he was promoted captain as a reward for his efforts. He was elected Fellow of the Royal Society on 1 June 1854 for his 'skill and sense in making magnetic observations at sea'. 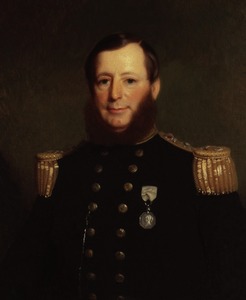 Being at the bottom of the captains' list with no further prospect of further commands at sea, he accepted the governorship of the Falkland Islands. He was asked to pay £80 for his commission and he refused. He asked for a private secretary, but that was denied him. His half-pay lapsed and he was given a salary of £800-£900 yearly.

Sailing from Plymouth on 12 August 1855, Moore arrived in the Falkland Islands as governor with his pregnant wife Emma (née Tapling) and their daughter on 7 November on board the 360-ton barque Frowning Beauty (Captain Harrison). Accompanying him was Commander John Sibbald RN, an old friend since the Antarctic voyages with Ross, and the first lighthouse keeper, Mr Creed and his family. 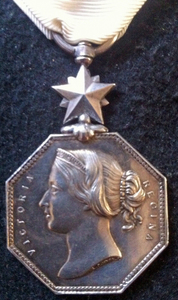 Moore was awarded the Arctic medal;...

Although he was one of the very few governors to have seen the Falkland Islands before his appointment, it is clear that initially he found things difficult and had trouble settling down. He wrote home to England: 'When I first came here everything looked deplorable, drunkenness was the prevailing habit' and he described the settlers as worse than savages. He was obviously missing the quarterdeck as he wrote that the colony's officers' 'ideas are to live in a kind of degraded state'. He suspended (though only temporarily) Arthur BAILEY, the colony surveyor and a magistrate, for discharging a pistol in the settlement and for insulting conduct in walking away when Moore was speaking to him. In 1856, he wrote a long despatch asking that all his senior officers be removed from the colony and replaced. He had quarrelled with the colonial secretary James LONGDEN, William Rennie (Governor RENNIE's son, who had remained behind after his father's departure), Bailey and Captain PACKE. The Colonial Office minuted: 'I am afraid the Governor is scarcely fit for his post. In the Falklands all has gone so ill that bad humour and quarrels are almost to be forgiven as the all but inevitable result of the painful circumstances under which the officials are placed'. To add to the problems, in his first year the colony suffered its first epidemic: fourteen children died and the school was closed for seventeen weeks.

But matters improved: the following January the governor wrote that he was satisfied with William Rennie and that Packe was back as a JP: 'The harmony which at present exists between myself and the officers of the government will remain unbroken'. 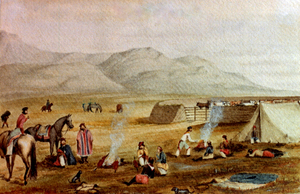 Gaucho camp  in the Falklands...

With the Crimean War over, visits by shipping voyaging round Cape Horn increased steadily and with Cape Pembroke lighthouse in action, Stanley was now considered a harbour of refuge. By February 1862, Moore was able to report in the annual Blue Book for the previous year:

The tables of shipping will show a gradual but decided increase in the number of vessels which have availed themselves of the great advantages of this port for obtaining fresh meat, vegetables, water and provisions of all kinds and, where damaged, can be repaired at less cost than at any other port on this coast of America. The aggregate tonnage of shipping entered at this port during the past year amounted to 21,327 tons being an increase over the preceding year of 5,285 tons. 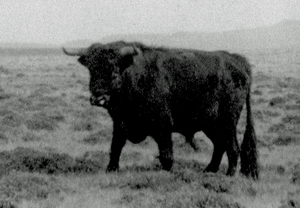 Governor RENNIE had been the first person in the Falkland Islands to domesticate one of the wild cows from the large herds, which roamed the Islands. The idea took hold and, following its success rather than wholesale slaughter, it became policy under Governor Moore to capture and reclaim the wild cattle forming them into tame herds, the cows for their milk and the large number of surplus bulls for meat. A dispute arose, however, over the ownership of the wild cattle and who might be permitted to kill them. While the Falkland Islands Company, by nature of their Charter, had exclusive right to hunt and kill cattle in Lafonia, they were subject to the Ordinances of 1851 and 1853 on their leased land, which forbade any person to kill wild cattle without the governor's permission. However the herds moved around the camp, regardless of farm boundaries and the law was hard to police. The Company maintained their right to kill wild cattle on their leased land and indeed admitted being at fault in sending gauchos to kill cattle for commercial reasons ten miles away from their leased land. A prosecution against the Company in the Islands followed by appeals in England rumbled on for years, far beyond Moore's time as Governor.

Meanwhile it became apparent that the Falkland Islands were entirely suitable for sheep farming and it was now increasingly taking over as the main agricultural occupation. By 1858 there were nearly 8,000 sheep, mostly Cheviot and Southdown breeds. Carcasses were being sold in Stanley and wool sent home 'commanding a very remunerative price in the London market'. But with each Falkland sheep valued at about £2, it was difficult to establish a sheep farm without considerable capital for the first purchase of sheep. Ewes could be obtained from the South American coast at 12s to 14s each, but many of these perished at sea and they needed to be crossed with English breeds to produce a profitable flock. 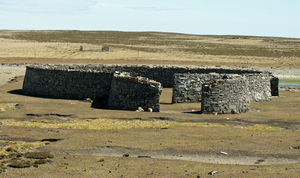 Early in 1857, Moore, using the naval brig Siren, managed to visit Keppel Island accompanied by Wiliam Rennie as acting colonial secretary from 1856-57. Moore was clearly impressed with what Keppel offered in terms of agriculture and with the progress of the Patagonian Mission under its newly arrived superintendent, GP DESPARD. The lease provided a valuable income to the colony for 1856, besides promising important future income from the settlement of West Falkland over the next decades. After Keppel, the Siren sailed on to Pebble Sound and the party went ashore on West Falkland by the Warrah River where they camped. In 1861, JM DEAN's proposal to settle Pebble Island together with a few other adjacent islands for sheep and cattle farming met with prompt support from Governor Moore, who suggested that he should stock the islands with cattle from West Falkland. Initially Dean was given a lease at £20 a year and subsequently permitted to buy the islands for £400.

In 1858 an agreement reached with the postmaster general in London reduced the postage rate to 6d per half ounce for mail either way between the colony and England, in line with other colonies but, in the case of the Falklands, this was still always to be paid in England on receipt or posting. Moore also welcomed book postage since: 'A Book Club and a Reading Room, on temperance principles, already exist and the latter has done much good among the Colonists. The maintenance of these useful societies would be ensured by the facility of obtaining books regularly by the mail from England'. Arrangements for prepaid postage were introduced in the Falkland Islands on 1 August 1861 and James Longden was appointed postmaster. 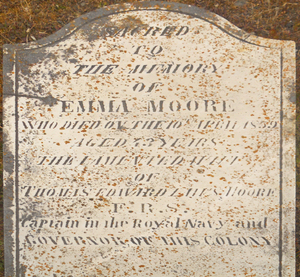 Governor Moore was the first governor to reside at Government House, begun in 1844 but still in the process of being built; the wooden cottage previously used now became the Government Office. The Births Register records that the Moores had a second daughter, Lydia Edith, born in the Islands on 8 February 1856. But on a less happy note, the Deaths Register shows that Emma Jane Moore died on 10 April 1859 aged 43 from angina pectoris. She has the sad distinction of being the only Governor's wife to be buried in Stanley cemetery. Moore wrote home that she had a short but painful illness. Clearing up her papers in January 1860, Moore was shocked to find affectionate letters from the magistrate Thomas BROOKE. The magistrate was taxed by Moore with this betrayal and - while he was home on leave in 1860 - by the Colonial Office. Brooke wrote a long letter, excusing himself, not denying the offence, but painting a picture of a boorish, suspicious and dishonourable governor.

In 1856 Moore moved the church into the east half of the building that Governor Rennie had built as an exchange and made the west wing into the school; in 1862 the church was named Holy Trinity. A new colonial chaplain arrived on 29 December 1859 in the person of the Reverend Charles BULL who became inspector of schools and also one of the four members of ExCo. 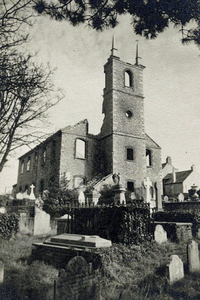 The bombed shell of St George's...

The last five years of his life were spent at 5, Victoria Place, East Stonehouse, Plymouth. In the middle of 1871 he suffered a stroke and he died on 30 April 1872 from congestion of the lungs. He was buried in the family vault at St George's Church, Stonehouse. He was survived by his second wife, three daughters and a son.

Editorial comment:  St George's Church, Stonehouse, Plymouth was partially destroyed during an air raid in World War 2; the building was eventually demolished and the gravestones dispersed to other churches. The location of grave of Thomas Moore is unknown at present.