author, naval architect and conservationist, came from an historic Manx family and was born in Rangoon on 11 February 1923, the son of Ewan Christian Brew Corlett.

He graduated in engineering science from Queen's College, Oxford in 1944 and joined the Director of Naval Construction's department in Bath, where he was awarded the Institution of Naval Architects' Wakeham Prize in 1947.A research scholarship at King's College, Newcastle, earned him his PhD in 1950. He worked for the British Aluminium Company as a naval architect until 1953. 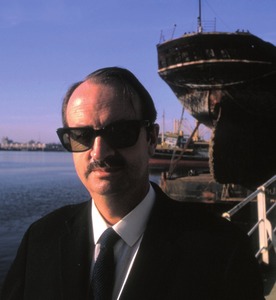 On 7 November 1967, when Brunel's huge steamship, Great Britain, lay virtually a wreck at Sparrow Cove in the Falkland Islands, Corlett wrote to The Times, highlighting the vessel's national importance.

Galvanising support, he managed to interest the millionaire Jack HAYWARD in becoming one of the prime financial backers of the project to bring the ship back to Bristol and conserve her.In 1968 he accompanied Lord CHALFONT in the Antarctic patrol ship HMS Endurance to the Falkland Islands and surveyed the wreck establishing that salvage was feasible. Thereafter as technical adviser, he played a major role in the restoration process, his book The Iron Ship, published by Moonraker Press in 1975, being the definitive technical history. 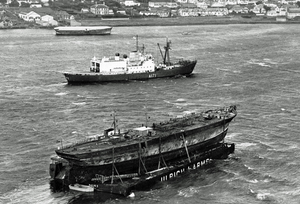 Corlett was appointed OBE in 1985. He was particularly proud of his award from the World Ship Trust, presented by Prince Philip, Duke of EDINBURGH, at Buckingham Palace, for his work on the Great Britain. 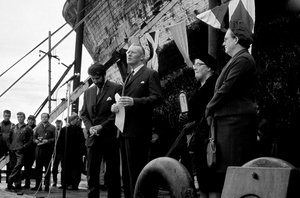 Handover ceremony of the SS Great...

On his retirement he found a vocation in the Church, being ordained deacon in 1991 and then priest in 1992.

In July 2005, he attended a 'relaunch' of the SS Great Britain Project at Bristol, which celebrated the completion of a major restoration phase. He died in his chair at home in Port e Vullen on the Isle of Man on 8 August 2005: his wife had died in 2002.

(1) Corlett served on the Board of Inquiry into the sinking of the Herald of Free Enterprise in 1991.

(2)  From Corlett's letter to The Times November 1967: 'The first iron built ocean-going steam ship and the first such ship to be entirely driven by a propeller was the Great Britain, designed and launched by Isambard Brunel.  This, the forefather of all modern ships is lying a beached hulk in the Falkland Islands at the moment. The Cutty Sark has rightly been preserved at Greenwich, and HMS Victory at Portsmouth. Historically the Great Britain has an equal claim to fame and yet nothing has been done to document the hulk, let alone recover it and preserve for record. May I make a plea that the authorities should at least document and photograph and fully record this wreck, and at best do something to recover the ship and place her on display as one of the very few really historic ships still in existence.' 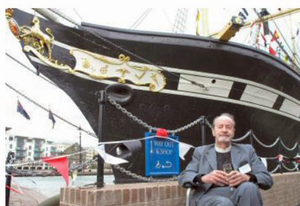 The Rev. Dr Ewan Corlett with the SS...

See:  The salvage of the SS Great Britain