businessman and benefactor, was born in Wolverhampton (Staffs) on 14 June 1923, the son of Sir Charles Hayward and his wife Hilda, née Arnold.

He was educated at Stowe School (Buckingham) and joined the RAF in 1941. He saw active service as an officer pilot in South East Asia and was demobilised in 1946 as a flight lieutenant.

He joined Rotary Hoes Ltd in 1947 and served in their South African branch until 1950. In 1951 he founded the US operations of Firth Cleveland Group of Companies and in 1956 he joined the Grand Bahama Port Authority Ltd in the Bahamas. In 1976 he became Chairman of the Grand Bahama Development Co Ltd and Freeport Commercial and Industrial Ltd. He was awarded the OBE in 1968 and knighted in 1986. 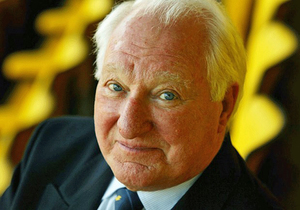 He married Jean Mary Forder in 1948: they have two sons and one daughter.

His connection with the Falkland Islands began through the salvage of the SS Great Britain, Isambard Kingdom Brunel's great steamship which had put into Stanley in difficulties in 1886 and been bought by the Falkland Islands Company as a store. She had lain beached at Sparrow Cove in Port William since 1933. A press report in 1969 that Hayward had just given £150,000 to buy Lundy Island for the National Trust induced the chairman of the SS Great Britain Project, Richard Goold-Adams to solicit his financial assistance. On 20 August that year, after a thorough discussion, Hayward made the commitment to guarantee sufficient funds to bring the ship back from the Falklands and the whole project was transformed.

Later he became a vice-chairman of the SS Great Britain Project and was involved in further fund-raising on her behalf, especially challenging the American millionaire John Paul Getty III to match a substantial donation to the Project fund. In a challenging salvage operation, the steamship was recovered from Sparrow Cove, off Port William, in 1970 and taken to Bristol for restoration. 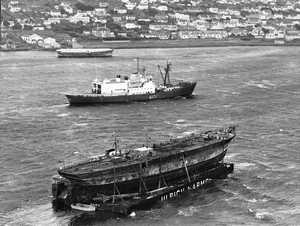 The salvaged SS Great Britain in...

Hayward visited the Islands twice after the 1982 conflict and in 1984 contributed an immediate £1 million to the rebuilding of the King Edward VII Memorial Hospital in Stanley after the fire: the sum was dedicated to old people's flats beside the hospital.

Hayward has a variety of other interests: among them, he is president of Wolverhampton Wanderers Football Club and of the Lundy Field Society. He has received an honorary doctorate from Exeter University and the Freedom of the cities of Bristol and Wolverhampton. 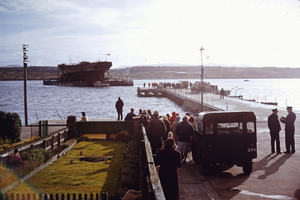 He described his hobbies as promoting British endeavours and preserving the British landscape, 'keeping all things bright, beautiful and British'.