Duke of Edinburgh and royal visitor, was born at Windsor Castle, the second son of Queen Victoria and her husband Prince Albert.

At 14 he joined the navy and served in Euryalus and St George visiting the Mediterranean, the West Indies and North America. Promotion came rapidly: lieutenant in 1863 and, skipping commander, captain in 1866. 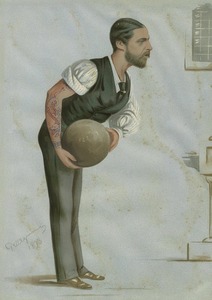 He was created Duke of Edinburgh in May 1866 and the following year commissioned HMS Galatea (3220 tons) and began a world tour which was to include South America, the Cape of Good Hope and Australia.

In November 1867 the Admiralty asked the Colonial Office to inform governors of the Duke of Edinburgh's cruise in Galatea during 1868/9, and in the following July Governor ROBINSON replied that: 'HRH will be received here with demonstrations of affectionate loyalty for which the inhabitants of this distant and isolated dependency are remarkable'.

In the event, the Duke was shot and wounded by a Fenian* sympathiser while in Australia in 1868 and he returned to England to recover. So it was not until 24 February 1871 that Galatea arrived in Stanley to be received at the Public Jetty by the colonial secretary (Byng), the colonial surgeon (Watts), GM Dean and FE COBB. The party proceeded to Government House to meet Governor D'ARCY. 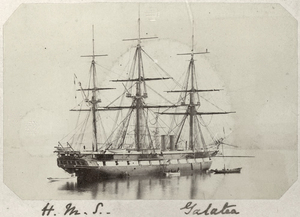 There followed several shooting expeditions, receptions at Government House and on board, a trip ashore by the ship's band and a visit to the ship by Stanley's schoolchildren. Galatea left on 3 March for Montevideo with HRH 'well-pleased to express himself gratified with his visit'.

On receiving the Governor's report on the visit, the Colonial Office decided not to send it to the Palace as it was not particularly interesting and anyway the Duke himself had already returned to England. A small plaque by the Public Jetty in Stanley commemorates the Duke's visit. 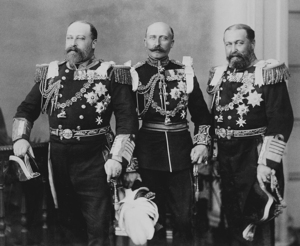 Prince Alfred (right) in Admiral of...

The Duke continued his naval career which he clearly took very seriously, becoming rear-admiral in 1878 and vice-admiral in 1882. From 1886 to 1889 he was commander of the Mediterranean fleet based in Malta.He became admiral in 1887 and admiral of the fleet in 1893. In the same year his uncle died and Alfred became reigning duke of the German state of Saxe-Coburg and Gotha, taking up residence in Coburg.

In 1874 he married Marie the daughter of Tsar Alexander II of Russia: they had four daughters and one son.

Prince Alfred was a keen stamp collector, and he was elected Honorary President of The Philatelic Society of London in 1890.  His nephew, later King GEORGE V, was also a noted philatelist. King Edward VII, in later years, bought his brother’s collection – and when this was combined with both Alfred’s and George’s collection, they form the basis of the Royal Philatelic Collection. 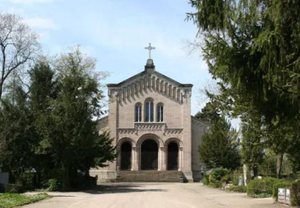