governor, was born on 14 January 1834, the fifth son of Admiral Hercules Robinson of Rosmead, Co Westmeath, by the only daughter and heir of Henry Widman Wood. After being educated at the Royal Naval School, New Cross, he entered the Colonial Service in 1855 as private secretary to his elder brother Sir Hercules Robinson, afterwards the first Baron Rosmead, who was then lieutenant-governor of St Kitts. In 1859, when his brother Hercules became governor of Hong Kong, William accompanied him there as private secretary. 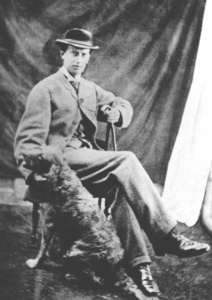 On 7 April 1862, he married Olivia Edith Dean, daughter of Thomas Stewart Townsend, Bishop of Meath and that year was appointed president of Montserrat, being carried ashore on the back of the black coxswain of the boat that had brought him there and walking to his quarters in the capital town of Plymouth. From January to October 1865 he administered the government of Dominica, once having to face down an angry mob.

On 23 May 1866, Robinson was appointed to be governor of the Falkland Islands, arriving in the colony with his family on board the sloop Spiteful, Captain AW Fletcher, on 24 June. His career was very nearly cut short soon after his arrival, when he fell into the water while landing at a jetty and almost drowned. He was rescued by William COULSON, whom he rewarded with a government job.

The colony was still in the early stages of development. At the 1864 census the population was 662, including 53 aliens. The needs of visiting ships were a major source of income. Sheep farming on East Falkland showed promise of advancing with rapid strides but West Falkland still remained unsettled. There was no direct taxation although the colony still received 'grant in aid'.

Robinson's most significant achievement was the settlement of West Falkland. When he arrived, there was not one settler on the West but by 1868 he could inform the secretary of state (the Duke of Buckingham) that, not only was the whole of West Falkland now settled, but that the large islands of Weddell and Saunders had also been taken up. The governor visited West Falkland, calling in at Fox Bay and Port Howard during the summer of 1868/69 and commented in a letter to Louis BAILLON in England that, while the undertaking 'must necessarily be attended with many hardships and privations...the settlers on West Falkland in the end will be amply repaid for all they may have had to go through in the first instance'. The rents from the settlement of West Falkland almost doubled the local revenue to the Falkland Islands and set the colony on course to be self-financing within ten years. 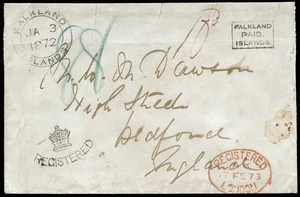 The Black Frank for postage from the...

Shipping calling at the Falkland Islands provided one of the chief sources of income at that time. Apart from supplying food, water and coal to the Cape Horner ships calling in at Port Stanley, there was a profitable business in repairing ships. The Governor reported that during 1866 fifteen vessels visited for repairs, twenty-five for water and provisions and thirty-one for ordinary purposes of trade. The wreck of the Coquimbana proved to be, in the words of his despatch to London 'a case of great interest and importance'. The ship had gone aground on Tyssen Ground in Falkland Sound in May 1867 and the senior magistrate ER GRIFFITH had backed the bench of magistrates in agreeing that her captain had the right to sell the cargo to Luis PIEDRA BUENA, as the ship was a wreck. Lloyds of London sent a representative to the Islands, Capt Miller, who appealed to Robinson. The governor used the presence of a naval ship in the harbour to ask Admiral Ramsay to send Captain MAYNE to look at the Coquimbana. Mayne pronounced the ship in no danger of breaking up and the governor reversed the court decision on appeal and ordered the goods to be restored to Miller for the owners. Miller's success 'will prove a death blow to a system which has in truth caused the name of the Falklands to become a by-word and a reproach in the shipping and mercantile worlds', claimed Robinson. The Colonial Office was impressed: 'the Governor seems to have dealt with this matter very skilfully...' minuted one official.

Although it was not until ten years later that the first Falkland Islands adhesive postage stamps were issued, it was during Robinson's time that the first Falkland Islands postal date stamp, first registration hand stamp and the small rectangular 'paid' mark, which was applied with a black inking pad and known to philatelists as the 'Black Frank', were ordered from the Crown Agents. All three appear on the earliest known 'Black Frank' cover dated 4 January 1869 which bears Robinson's initials and is possibly the first Falklands 'First Day Cover'. 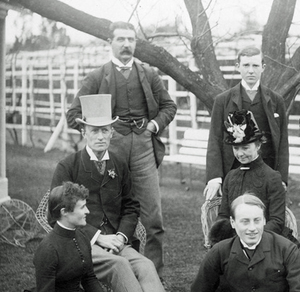 The Robinson family in Australia....

Robinson found a high standard of living in the Falkland Islands. He wrote in the Blue Book for 1866: 'with wages so high and food in abundance the settlers are prosperous and contented. Poverty and distress are unknown, sickness rarely visits the Colony, the people are loyal, the laws are respected and harmony and good feeling prevail amongst all classes of Society'. It was therefore not surprising that towards the end of his tour of the Falkland Islands the governor suggested to ExCo that the time had come when the colony should contribute to its own support by direct taxation: possible suggestions were a house tax, an income tax, a horse tax and a tax on imported liquor. None was pursued.

In November 1867 Robinson requested 12 months leave for health reasons and to leave his wife and children at home: 'Having served in the tropics for 11 years ... I feel severely the continual cold of this place, where from year's end to year's end a warm day is a thing unknown'. Officials in London supported his request, adding: 'He is by far the best governor that we have ever had in the Falklands'. But the secretary of state was not prepared to leave the post vacant for so long. 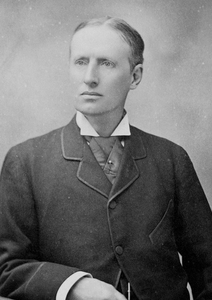 A year later asking (unsuccessfully) for the government of Antigua, Robinson listed his achievements in Stanley: dealing with the cattle claims, improving the financial health of the colony, the West Falkland land settlement, the Coquimbana case; and general social improvement. Robinson left the colony on 5 April 1870 in the corvette Pylades, Captain Buckley, in which his successor, Colonel D'ARCY had arrived. 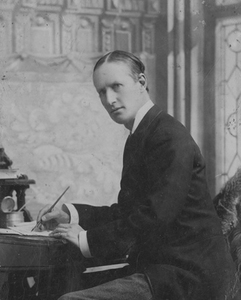 'A composer of some note'

His other achievements lay in the field of music, which was the passion of his life. He was a composer of some note, a patron of numerous societies, besides lending his active support to various composers including Heuzenroeder, Julius Herz and Marshall-Hall. Having written part songs and pieces for military bands in London under the nom de plume 'Owen Hope', he composed several well-known and successful songs in Australia and a two act comic opera Nut Brown Maid. While in the Falklands he composed the music for a burlesque called Villikins and his Dinah which was performed in 'the theatre' in Stanley in October 1868 with FE COBB as Villikins and George TRAVIS as Dinah.

Sir William Robinson died aged 63 at his home in South Kensington on 2 May 1897 after a severe throat infection. He was the only one of the early governors who arrived as a professional with wide experience of colonial administration, and his was a very successful term.