post office clerk, was born on 16 May 1889, the daughter of Richard Atkins (son of a military pensioner) and Isabella Wingrave. Her mother died shortly after Isabella's birth and the seven children were brought up with other families. In Isabella's case her aunt Frances Cletheroe looked after her and she was known for a time as Dolly Cletheroe. 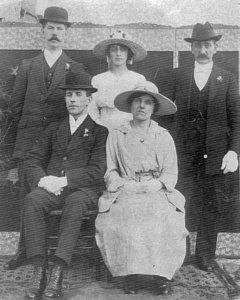 14 The wedding of Isabella Atkins.

Her handwriting on registered envelopes was well known to philatelists.

Her family recall that she developed housemaid's knee from repeatedly shutting the door of the post office safe with her knee.

In September 1920 she married John Milne, a Scots student who had come to the Islands as a travelling teacher and had then obtained a job with the treasury.

They had one son, John Stewart Milne, (called Ian to avoid confusion with his father), born in 1921, who went on to become a consultant physician near Edinburgh.

The family lived in Scotland when John Milne's contract in Stanley ended, apart from a spell in the Gold Coast (Ghana).

Isabella and John Milne's son - John Stewart Milne (born 18 July 1921) - had a distinguished medical career., and he was the first Falklands-born person to qualify as a medical doctor.  'He grew up in Edinburgh and graduated MB, ChB in 1944. He later became a principal in a General Practice based in Ormiston, East Lothian (1946 -1966). Milne undertook extensive research in geriatric medicine and was appointed Research Fellow at the Royal Victoria Hospital, Edinburgh in 1967. As a result of his numerous published articles, Milne was awarded a DSc. degree in 1982. He latterly took up the post of consultant in Geriatric Medicine in East Lothian. Following his retirement he continued researching methods of extra domiciliary care in place of hospital admission.'  John Stewart Milne died on 8 January 2009. 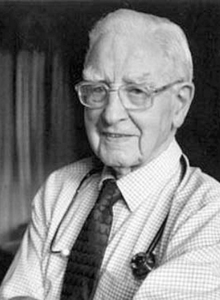 John Stewart Milne, the son of...

For the second Falklands-born person to qualify as a medical doctor see: Dr Brian Goss  (in the biography of Barry Goss)