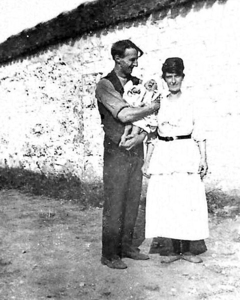 Sydney Goss was born in the Falklands, but aged four he moved with his parents to Northern Ireland in 1894. He fought in World War I as a trooper in the colonial regiment, 1st King Edward’s Horse. He was reportedly gassed in the trenches and was taken prisoner of war. He was discharged from the service on grounds of disability on 1 April 1919.

Sydney Goss and his family moved back to the Falklands in ­­1924.

Barry Goss had a marked aversion to attending school in Stanley and only did so for a few months before returning to live with his parents in Camp. Nevertheless, he acquired serviceable numeracy and literacy through home schooling. 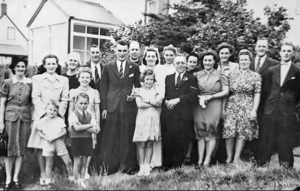 At the age of 15 he became a cabin boy on the Falkland Islands Company ship Fitzroy, and later he became a farmworker. He served full-time in the FIDF during World War II as an artilleryman at Cape Pembroke.

In 1946 Goss was appointed as the only Falkland Island Police Service (FIPS) officer on South Georgia, stationed on King Edward Point near Grytviken. His appointment to FIPS was partly based on his wartime service as an artilleryman and his ability to maintain naval guns. Two 4-inch Mark IX naval guns had been installed on South Georgia during World War II - one at Grytviken and the other at Leith. At both Grytviken and Leith Harbour a man was employed to maintain the guns. At Grytviken this was Barry Goss, who made monthly visits to the gun, being paid a retainer of £1 for every visit. 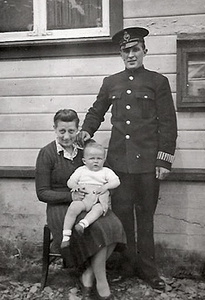 The Goss family lived at King Edward Point (KEP) where there were also a magistrate, a customs officer, a meteorologist and a radio operator.  Goss’s home was at the furthest end of the settlement from the jetty, appropriately next to the gaol.  His job description was to act as ‘policeman and handyman’ although he always referred to himself as being a ‘policeman and stoker’.  The stoker component referred to the requirement to keep the magistrate’s boiler running. 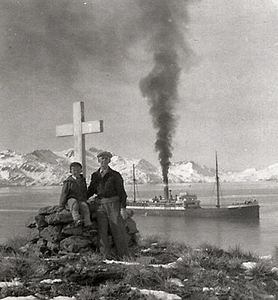 There was no police station at KEP, but there was a gaol, which is still standing today, and two police service boats. The gaol is part of a rectangular building, which was also the customs store. It is built of timber and corrugated iron with internal brick walls for the cells. It has a central area with a stove and there are three cells. During his service on South Georgia, Goss only had two short stay prisoners. Both were stowaways from South America hoping to get to South Africa who had got on the wrong boat and needed accommodating pending their return.  Both had given themselves up to crew members as the temperature fell during the journey south.

The lack of use for the gaol meant that it became Goss’s workshop. In common with Falkland Islanders of his generation he was very practical - always fixing or making things. Goss’s other place of work was the boathouse and the boats moored at the jetty.  The boathouse had a slipway and either of the boats that needed work could be pulled out into the boathouse.  There was a narrow-gauge railway line for a man-hauled truck that was used for moving provisions from the jetty to the houses at KEP. 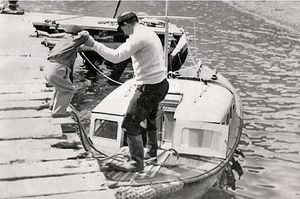 Barry and Brian Goss on the police...

The most frequent boat trips were across the harbour to Grytviken.  The family recall that:

The smell was at once overpowering, disgusting, but strangely comforting. Barry Goss seemed to know everyone as we walked around.  The outer clothes of the flensers were a sight to behold.  Their faces were like coal miners and their outer clothes were thick with grease, blood and dirt.

The Goss family made many friends amongst the whalers - particularly with the gunners on the whale catcher ships - and they  enjoyed the lifestyle. Thus it was with many regrets when they eventually left South Georgia. 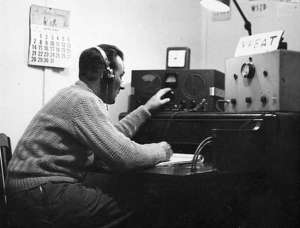 The family left South Georgia in 1954 and emigrated to England. There were two factors driving the decision to come to the United Kingdom.  Barry Goss had developed a duodenal ulcer and the whaling station doctor quite reasonably did not relish dealing with a perforated or bleeding ulcer in such an isolated environment with no recourse to evacuation or specialist help.  The other reason was that their son, now aged six, needed further schooling. Brian Goss’s mother had taught him basic numeracy and literacy, but she had left school at 11 herself and she did not feel she could help her son further. There were no schools or other children on South Georgia.  Given the need for medical cover and education the choice for the family was between returning to the Falklands or emigrating to the UK. Barry Goss believed that scholarships for secondary education in the UK were difficult or impossible for Falkland Islanders to obtain.

On completion of his service to the Falkland Islands Government the Colonial Secretary, Colin CAMPBELL, wrote the following testimonial:

[Goss’s] character is exemplary. He has a pleasant personality and is willing to undertake any kind of work. [He is] a good all-round handyman who also has some knowledge of Police duties and Customs work. He is a keen radio amateur and can receive and transmit at 25 words per minute. With a little training he should make a very good commercial operator. 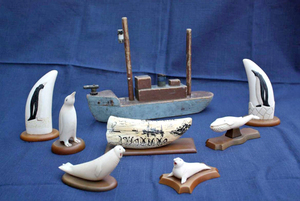 Toys and scrimshaw made for the Goss...

On Valentine’s Day 1954 the Goss family disembarked at Tilbury Docks and moved into Byron Avenue, Manor Park, London. This was the home of Hannah’s father, Fred and his second wife, Violet Hansen, née Hallett.   While living at Byron Avenue Goss worked as an electrical technician at Standard Telephones and Cables (STC) in North Woolwich. Although lacking formal qualifications and having only tolerated school for six months, Goss’s natural intelligence and enquiring mind had enabled him to get a good grasp of English and mathematics - and his hobby of amateur radio operation (using the call sign VP8AT) at South Georgia had both forced and enabled him to teach himself electronics, understand the physics of electricity, do necessary calculations and troubleshoot anything for which he had a circuit diagram. Consequently, as time progressed at STC Goss was quite at home with graduate electrical engineers, often finding faults that had eluded them through a self-taught process of rigorous elimination.

At STC he worked on the underwater repeater stations that were necessary to transmit telephone signals along the cables from the UK to the USA.  Later, while working at Kelvin Hughes in Barkingside, he became a trouble-shooter for complex electro-mechanical plotting equipment used in harbour control and on very large vessels. 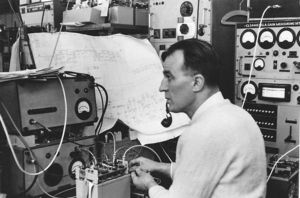 In 1955 the Goss family moved to Empress Avenue, Ilford, and in 1970 they moved to Billericay

Hannah Goss died in 1971, and Barry Goss subsequently married Bessie Virtue Emma Marney née Pearce. He moved to his second wife’s flat in Chadwell Heath – which was where he was living when he suddenly died in June 1998.

The son of Barry and Hannah Goss - Brian - was the second Falkland Islands born person to qualify as a medical doctor, having trained at the London Hospital. (His mother, Hannah, died at the London Hospital while he was in training there.) Dr Brian Goss made a brief return (for three months in 1985) to the Falklands, at the invitation of Governor Rex HUNT, to act as locum tenens doctor after the fire which destroyed a large part of the King Edward Memorial Hospital (KEMH) in 1984, and during the absence on leave of the Chief Medical Officer - Dr Alison Bleaney. 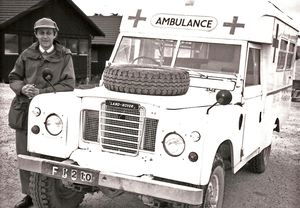 For the first Falklands-born person to qualify as a medical doctor see: Dr John Stewart Milne  (in the biography of Isabella Atkins)