official and whaling manager, was born at Bideford, Devon on 24 November 1917, the son of the Rev Rollo Pierce-Butler. He was educated at schools in Southampton and Winchester before entering the Air Service Training Establishment in 1936 in order to gain his Air Ministry radio licence. From May 1938 he was employed by Imperial Airways as a radio officer transferring a year later to Scottish Airways. At the beginning of World War II in September 1939 he was commissioned as second lieutenant in the Royal Signals, rising to the rank of captain in May 1941. In September 1942 he was posted to Orkney and Shetland Signals and was promoted major in 1945. 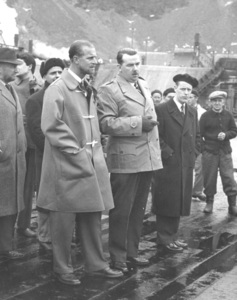 As radio was his speciality, Butler was recommended to the Royal Navy. In November 1945 he was placed in charge of communications for Operation Tabarin*, the British wartime operation in Antarctica which developed into the Falkland Islands Dependencies Survey. Butler arrived at Stonington Island, Marguerite Bay in February 1946. At the end of that year he became base leader and in April 1947 leader of FIDS. In February 1948 the base was relieved by Dr Vivian FUCHS and, after a short period at Deception Island in the South Shetland Islands, Pierce-Butler was appointed in April 1948 on the recommendation of the governor, Sir Miles CLIFFORD, secretary of FIDS - always known colloquially as SECFIDS - based in Stanley.

Pierce-Butler arrived in the Falklands on 12 November 1948 and was shortly thereafter appointed personal aide-de-camp to Governor Clifford. In January 1949 Clifford also appointed him commanding officer of the Falkland Islands Defence Force and in June 1949 the first controller of civil aviation. Pierce-Butler helped to choose the Auster light aircraft in the United Kingdom in 1948 for internal air service in the colony and to draw up specifications for the new radio equipment to be issued to all farms in the Camp: 'Major Pierce-Butler has shown notable initiative and resourcefulness in helping to start an air service here, in face of considerable physical and geographical difficulties' wrote Clifford. In January 1950 he sailed south again in the John Biscoe to Stonington to evacuate Fuchs and his team whereupon the base was closed. 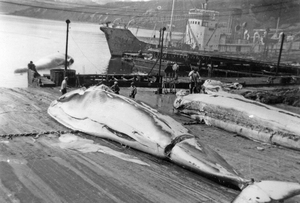 Whales on the flensing plan at...

On 15 March 1951 Pierce-Butler was appointed magistrate at South Georgia, taking up residence at King Edward Point. At this time, whaling was still in full swing on the Island with three land stations, Grytviken, Husvik and Leith all in operation. Pierce-Butler started to take an interest in the whaling business, particularly in whale catching, processing and production. His position in government and his interest in the industry brought him into contact with Alfredo RYAN, a Gibraltar-born Argentine businessman who owned the Compañia Argentina de Pesca, the proprietors of Grytviken. Ryan wished to improve relations between his company and government and Pierce-Butler, who had by this time become disenchanted with the Colonial Service, was persuaded in early 1954 to join Ryan's whaling business. He had noted, during his period at South Georgia, that Ryan's company Pesca was the poorest producer on the island and he set forth to address their problems. In the three years which followed, Pierce-Butler became manager - the first ever British manager of the company - and, to the chagrin of his predominantly Norwegian workforce, transformed its production and output by a comprehensive modernisation programme both at the land station and at sea. Financed by Ryan, antiquated whaling plant at Grytviken was replaced and a completely new fleet of whale catchers were built to hunt the decreasing number of whales which were now largely found some distance from the island. By 1957/58 Grytviken had overtaken its rivals in both the number of whales caught and quantity and quality of whale oil and meal production; good profits were returned. Pierce-Butler also laid the foundations for the transfer of Ryan's wholly owned whaling business from the Argentine to the British flag by the creation of a new company, Albion Star (South Georgia) Limited with its registered office at South Georgia and subsidiaries in Gibraltar and the United Kingdom.

In 1958, however, Pierce-Butler suddenly and mysteriously left Ryan's employ. There was rumour that Ryan, against Butler's wishes, had withheld further investment, because he had become nervous about the prospect of a total collapse in the whale population and a fall in the price of whale oil and other whale products. Pierce-Butler returned to England and became a 'whaling consultant'. He found work in South Africa for the Hector Whaling Company which ran a whaling station at Saldanha Bay, about 60 miles north from Cape Town. He saw this as a similar challenge to Pesca, but the numbers of whales were decreasing and the station eventually closed in the mid-1960s. Butler then became involved in a number of South African businesses. As well as managing ships for a Cape Town based sea diamond mining company, he became the General Manager for Andrew M. Behr & Co (Proprietary) Ltd, an arm of the Sierra Fishing Agency which operated, with Norwegian support, the infamous pirate whaling ship Sierra and a number of whale catchers registered under the dubious company name of Scandinavian Dry Cleaners . The Sierra Agency (and her predecessor the Run Fishing Agency) supplied lucrative quantities of frozen whale meat to the Japanese, obtained by catching whales and processing whale meat on the high seas in defiance of controls imposed by the International Whaling Commission. However, this business came to an abrupt end in 1979 when the Angolan civil war disrupted trans-shipments and conservationists rammed the Sierra. Eventually, after extensive repairs, the ship was sabotaged while she was in a Portuguese port preparing to sail. Butler then became the manager of a petrol station at Hout Bay, near Cape Town. 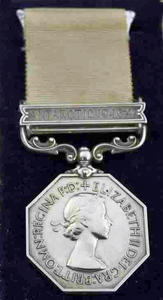 Pierce-Butler was married twice. Little is known of his first marriage other than that he declared it on his application for the SECFIDS post in April 1948. The marriage was thereafter dissolved. His second marriage, in the Register Office of the City of Westminster on 14 August 1954, was to his previously widowed housekeeper on South Georgia, Janet Cooper Horne neé Gilmour, twelve years his senior. She was the mother-in-law of Thomas Adair Carey, the wireless operator at King Edward Point from 1951-54. Mrs Horne had first arrived on the island to support Carey, his wife (who had become ill) and child, but when the Crown Agents failed to fill the post of chief steward she was appointed temporary stewardess on Pierce-Butler's recommendation 'to act as his housekeeper, supervise catering for single officers and be in charge of the provision and clothing store'. In December 1952 he reported her as 'entirely satisfactory' and she was confirmed in the post. When Pierce-Butler moved to Pesca in 1954 she resided with him at Grytviken between 1955 and 1958. They had no children. Pierce-Butler died in South Africa in 1995.

An appraisal by Clifford in 1953 makes a generous epitaph: 'Butler has rendered some sterling service while in these parts ... in this last appointment, which entails more 'fieldwork' and personal contacts he has done very well and will be greatly missed by the whaling community... He ... can inspire confidence, respect and affection'. Although Clifford noted ' he does not shine in any form of office work,' he went on to commend him as  ' loyal, energetic, zealous, and enthusiastic to a fault, most practical and a proved leader of men'.