geologist, expedition leader and administrator, was born on 11 February 1908 at Freshwater on the Isle of Wight, only child of an English mother, Violet Anne Watson and a German father Ernst Fuchs. He attended Asheton preparatory school in Kent, where he acquired his first nickname, Bunny, and after Brighton College went on to St John's College, Cambridge. 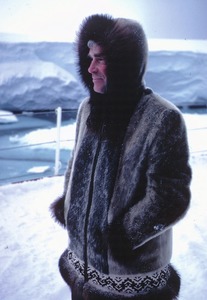 147 In Antarctica in an Eskimo jacket.

Despite a poor degree, he mixed with influential contacts in the Cambridge polar network who shaped his life and went on a geological field excursion to Greenland in 1929. He spent the next nine years in colonial East Africa on various privately funded expeditions conducting scientific enquiries largely on his own terms, coming to grips with all the problems of logistics, man management and the death of companions in a tough climate and in remote and difficult terrain. He spent most of the war in Britain and West Africa, finally leaving the army in October, 1946.

Back in Cambridge Fuchs applied to the Falkland Islands Dependencies Survey (FIDS) as a geologist and was surprised to be appointed field commander, starting in July 1947.

Stewart SLESSOR showed Fuchs the ropes on his inaugural journey around the bases early in 1948. Without specific instructions, he was free, in 1948 and 1949, to make two long sledge journeys down George VI Sound with his geological companion Ray ADIE. 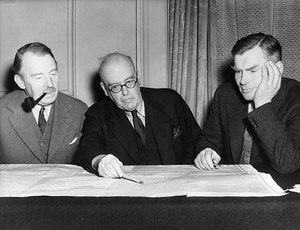 At Stonington base Fuchs received the nickname Papa, an obvious recognition of the generational gap between him and many of his colleagues. He was an enthusiastic dog sledger, and a meticulous observer and recorder of places and events, but he generally left the scientific and survey work to others.

As field commander, Fuchs had reported to Governor CLIFFORD in Stanley who was constitutionally responsible for all aspects of the operations, including the scientific programme. Over the next few years, however, power and control moved inexorably to London. 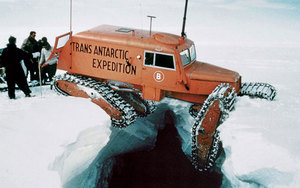 489 Snow cat astride a crevasse during...

With his appointment, in June 1950, as the Principal Scientific Officer of the new Falkland Islands Scientific Bureau, Fuchs was the man who, by and large, implemented, although not always initiated, this shift of responsibility through numerous incremental organisational changes. He was well-placed to understand the many almost insoluble conflicts among the paymasters, the politicians, civil servants, scientists, practical managers and the men in the field, and he earned much of the credit for keeping it all together.

But administration of this kind was not as important to him as the need to satisfy his ambition to cross Antarctica, an idea he had formulated with Adie in 1949 and discussed with Clifford in 1950 on his way home. Clifford was naturally enthusiastic, and, to the extreme consternation of Fuchs, immediately wanted to organise it within FIDS. In 1953 Clifford was thwarted when Fuchs got the amber light: Sir Raymond Priestley took over the running of FIDS Scientific Bureau to release Fuchs for the Commonwealth Trans-Antarctic Expedition (CTAE), and Clifford was brought on side with two more bases being set up on the Antarctic Peninsula in 1955. Fuchs's great CTAE adventure eventually came off between 1955 and 1958, although much of the glamour was captured by plucky Sir Edmund Hillary who drove his Ferguson tractor to the pole rather than wait deferentially at a depot for his leader to arrive. Fuchs was knighted for his remarkable achievement. 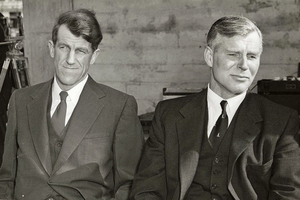 Fuchs and Sir Edmund Hillary at...

Sir Vivian returned to FIDS on 1 January 1959 as its first director, and continued to draw power away from Stanley, which he visited again, after an interval of ten years, in the southern summer of 1959-60. He was by this time in his early fifties, and in his autobiography he revealingly and wistfully described the next thirteen years as being 'Towards Retirement and After'.

As director until 1973 when he retired at the age of 65, he enjoyed periodic cruises around the Antarctic bases (passing through Stanley early in the years 1964, 1967, 1970, 1971 and 1973), intervening in day-to-day decisions and telling the young explorers what it was like in the old days. 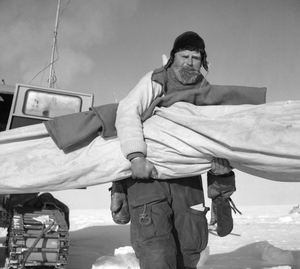 From London he swapped notes with Governor ARROWSMITH on the performance of each new Jaguar that he bought and he battled against administrative changes, notably the incorporation of the British Antarctic Survey (as FIDS had become on 1 February, 1962) into the bureaucracy of the Natural Environmental Research Council. Thereafter Fuchs remained active on committees of the great and the good.

Fuchs suffered a heart attack in 1987 and a severe stroke in December 1997. He died in Cambridge, aged 91, on 11 November 1999, leaving an estate valued for probate at £533,101. Fuchs was commemorated on postage stamps issued by the British Antarctic Territory in 2000.

For more detailed information on the early history of Stonington Island, Marguerite Bay and other British Antarctic bases see:https://margueritebay.org/