geologist, was born on 26 February 1925 in Pietermaritzburg, South Africa. He was educated at Maritzburg College and the University of Natal, and then came to Britain in 1946 to join the Falkland Islands Dependencies Survey (FIDS). He sailed south later that year for the Antarctic base at Hope Bay, where he spent the 1947 austral winter. For the 1948 winter he joined the team at Stonington Island led by Vivian FUCHS, and was forced to spend a third winter in the Antarctic when ice conditions prevented relief. Fuchs and Adie undertook epic dog-sledge journeys of geological exploration along the length of the Antarctic Peninsula. In his 1982 book Of Ice and Men Fuchs acknowledges Adie as the man who 'taught me to drive dogs' and comments on his composure and meticulous attention to detail. 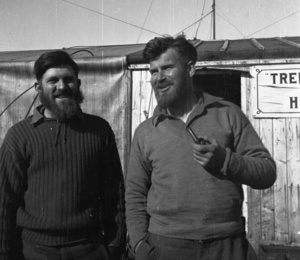 In February 1950 the Stonington base was finally relieved and soon Adie was back in the Falkland Islands. At the request of Governor CLIFFORD, he interrupted his journey north and spent April investigating possible sources of lime. He examined sites at Fitzroy and around Port Salvador and, with his South African background, would have relished the familiarity of the local rocks. As his subsequent publications were to show, he spent his time well, gathering additional details on the sequence of strata and evidence for formerly higher sea levels.

Back in Britain, Adie wrote up his geological observations at St John's College, Cambridge. His PhD thesis on The Rocks of Graham Land was accepted in 1953, and three important scientific papers on aspects of Falklands geology appeared around that same time. In 1952 he presented a synthesis of Falkland Islands stratigraphy to the International Geological Congress in Algiers, the first time it had been placed comprehensively before an international audience. In the same year, he published a short paper in The Geological Magazine proposing a radical geological history for the Falkland Islands involving close links with South Africa and tectonic rotation during continental drift. In 1953 his observations of the evidence for previously higher sea levels around the islands were published as a FIDS Scientific Report. 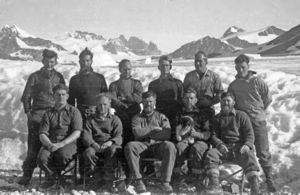 His most prescient contribution was undoubtedly the 1952 paper entitled The position of the Falkland Islands in a reconstruction of Gondwanaland. Therein he proposed that, prior to the break up of the ancient Gondwana supercontinent, some 200 million years ago, the Falkland Islands had been located off the south-east coast of South Africa; then they had been rotated through 180° during their passage to their current position as the Atlantic Ocean grew to its present configuration. Details of Falklands geology were presented in support, but the paper was based largely on Adie's broad intuitive understanding of the regional geology. It was a brave paper for its time. This was more than a decade before the first ripples of the plate tectonic revolution were felt in the geological mainstream and continental drift was then widely regarded as a barely respectable heresy. Adie's proposals were neglected for more than 30 years, until confirmed during the 1980s by modern methods of palaeomagnetic research.

With his PhD complete and papers published, in 1953 Adie married Aileen Hancock and began work as a geologist for the chemical company Albright and Wilson Ltd. Meanwhile, with the expansion of FIDS activity, arrangements were made for returning geologists to write up their work in the Geology Department at the University of Birmingham, and in 1956 Adie moved there as FIDS Chief Geologist and Honorary Reader in Antarctic Geology. In this role he was able to stimulate further interest in the geology of the Falkland Islands, and was instrumental in arranging for the photogeological interpretation by Mary GREENWAY which led to the first comprehensive geological map of the islands, published in 1972. Adie supervised map production and contributed an economic assessment to the accompanying geological description. 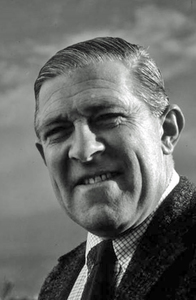 During the later years of his career, Adie established a formidable reputation as a scientific editor, and acted as de facto Deputy Director for FIDS, which became the British Antarctic Survey (BAS) in 1962. He was formally appointed Deputy Director in 1973. He reportedly briefed the Prime Minister Mrs Thatcher during the 1982 conflict on the part which the two BAS ships could play. Though highly regarded by his peers, in more liberal times he was viewed by some younger staff as a somewhat austere and autocratic figure. He was honoured with various awards, including the Polar Medal in 1954 and the Bellingshausen Medal of the USSR Academy of Sciences in 1970. Also in 1970, he was created an OBE in recognition of his contribution to British research in the Antarctic. He is commemorated in Adie Inlet on the east coast of the Antarctic Peninsula.

Ray Adie retired in 1985 and spent much of the rest of his life in South Africa where he died on 14 May 2006 following surgery for cancer. He was survived by two of his daughters, Daphne and Virginia (his wife died in 1984 and his eldest daughter Diana died in 2002), nine grandchildren and his partner of 15 years, Nora Grice.