geologist, was born in New Malden, Surrey on 17 February 1948, the daughter of Jack Greenway and Vera Greenway, née Collett. She first studied geology at Wimbledon High School for Girls, but her interest in landscapes was evident earlier on holidays in Sussex, Jersey, the Lake District and on a schoolgirl expedition to the Faeroe Islands. She read Geology at Exeter University and after a few months at the Directorate of Overseas Surveys joined the British Antarctic Survey at the University of Birmingham. She was to produce a geological map of the Falkland Islands for ODA using primarily aerial photographs (photo-geology), together with previously published material. 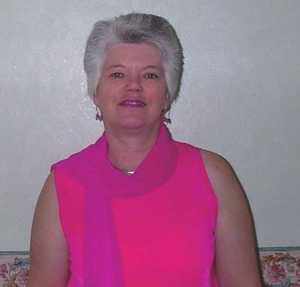 In 1970 fieldwork by British scientists in Antarctica was mainly restricted to summer expeditions for male personnel only! Thus it was thought that analysis and interpretation of air photographs, with no fieldwork but reference to previous work, would suffice for this project. Photo-geology was a new discipline for Greenway, but guidance was available from Birmingham lecturer Phil Garrett.

Photo-interpretation involves the examination of pairs of overlapping aerial photographs; using a stereoscope (a binocular viewer), the central portion of the view appears three-dimensional, allowing topographical and geological features to be recognised. A series of 1:25,000 photographs was taken in 1956, and every pair of the approximately 2,500 prints covering land was examined. Using a specially devised geological legend, annotations were made first on transparent overlays and then transferred by hand in coloured inks to the 29 topographical base map sheets of the Islands on a scale of 1:50,000 published in 1961-2. All this before computerised or digital mapping! Photo-interpretation started in spring 1970 and took over a year of painstaking and often lonely work by Greenway. 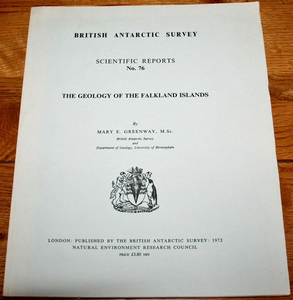 To confirm the geological formations identified on the photographs but not examined in the field, close reference was made to the map and report of HA BAKER, who carried out the first geological survey of the islands from 1920-22. Further information was gained from reports of the visits of Charles DARWIN and other scientists, and from occasional visits by BAS personnel to the Falklands. There was also discussion with colleagues and other experts. Thus the map and report were finalised. The map was published in 1972 as two sheets, West and East, at a scale of 1:250,000, accompanying the official report, The Geology of the Falkland Islands (British Antarctic Survey Scientific Reports No 76). Greenway was awarded an MSc in 1972.

She never visited the Falkland Islands, but until 1998, hers was the official geological map of the Islands. During the conflict of 1982, the map was used for information about the terrain and other natural features. Indeed, there are reports that it went out of print due to demand at this time! 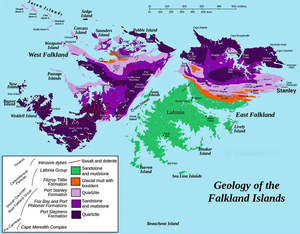 The geology of the Falkland Islands

After compiling a gazetteer of the Islands published in 1974, Greenway trained as a teacher and spent the next 20 years teaching geology and geography in schools and colleges in the Midlands and Sussex. Brief expeditions followed to Iceland, Norway, the Cairngorms and Snowdonia. In 1983, she married Colin Orchard, an accountant in Brighton, and they had a daughter, Joanna, in 1985.

During 1996-8, a further geological survey of the Falklands was undertaken by Dr. Don Aldiss, seconded from the British Geological Survey, and Emma Edwards, a Falklands geologist. The new map was published in 1998 and is now the definitive version. The contribution of the 1972 map was acknowledged but additional fieldwork has allowed a much fuller understanding of the geology.

Since 1995, Greenway has been writing indexes for books, many of them geological, and she is now a Director of Indexing Specialists (UK) Ltd.