magistrate South Georgia, was born in Aylsham, Norfolk on 6 June 1923, the son of AC Matthew and HV Matthew, née Hunt. Educated at Winchester College and Christ Church Oxford, he served in the Royal Navy from 1942-6. He entered the Nigerian administration in 1948, and was seconded to South Georgia from the Government of Northern Nigeria for what was known as the International Geophysical Year, 1956-59, because the government of Argentina was unstable and it was expected that they might provoke some disruption. He and his family arrived in King Edward Point in March 1957 coming via the SS Fitzroy and HMS Protector. 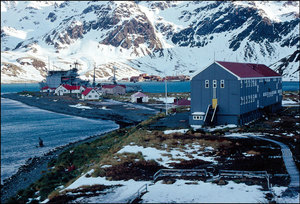 These were years of an unprecedented research in and around the Antarctic. Sir Vivian FUCHS crossed over the continent. Whaling was in full swing from three shore stations on South Georgia. Salvesens had two pelagic* expeditions which began and ended each season in Leith Harbour. All the Salvesen catchers were dry-docked and repaired annually there and the catchers of Grytviken and Husvik were serviced there in the winter or occasionally sent off for repair elsewhere. The 24 hour reporting by the meteorological staff was held in high regard. There were never fewer than 700 people on the Island at that time and many more during the season. This started with sealing in September, the Island being divided into four sections, one of which was rested from sealing each year. In this way the seal population of the Island was kept steady.

Matthew took the opportunity of going right round the Island twice, visiting every bay and, landing on Annenkov Island which few other than sealers had visited. At that time fur seals were to be found only on Bird Island. A man claiming to be an Argentine customs officer appeared in 1958 and again in 1959 arriving on a Compañia Argentina de Pesca transport ship from Buenos Aires. He rather naively said he had come to assume duty ashore in South Georgia. However he was required to remain on board ship while he was there, except once when he was escorted ashore by the policeman/handyman in uniform to the dentist's surgery at Grytviken for treatment and back on board again. The colonial secretary in Stanley was informed in the non-secure government telegraph code - enough to establish and make plain the position without fuss. Both the captain and the chief officer of the Pesca transport ship were seconded Argentine naval officers. They were cheerful company and the captain at least enjoyed the British connection in clubs in Buenos Aires. 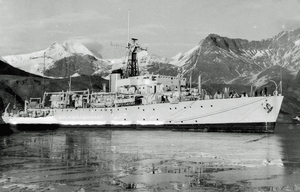 In 1959 Matthew made two recommendations to the governor, Sir Edwin ARROWSMITH, to the under-secretary of state for the colonies, Sir John Macpherson, to the governor of Northern Nigeria, Sir Bryan Sharwood Smith, and to (now Sir) Peter Smithers, who was MP for Winchester and parliamentary secretary to the minister of state for the Colonies, each of whom he knew and had spoken to personally. His recommendations were that:

1. There should be a new substantial building to house the government staff at King Edward Point.

2. There should be a hydrographic survey made of the rock-strewn South West side of South Georgia of which there was still little known except what was held in the heads of Pesca's sealing Captains.

Both recommendations were accepted and extensive hydrographic survey work was achieved during the next three years particularly by HMS Owen. The new building was called Shackleton House and stood till it was demolished in 2001. The published Admiralty chart work is there for all to see.

Matthew arrived back in Nigeria on 7 December 1959, the day that the last genuine and properly supervised Nigerian government election ever took place - so far. He retired from Nigeria in 1963 and served as assistant bursar at Winchester College from 1965-85. He was a City and (Hampshire) county councillor and stood for Parliament and the European Parliament as a Liberal candidate. He was awarded the OBE in 1981.

(1) The construction of Shackleton House and a house for the Administrator was very costly: Jan Cheek, daughter of Betty and Basil BIGGS comments: 'The expenditure on the two buildings was £179,163 (1962/63) and a further £15,225 (1964/65). This was a vast sum at 1960s prices and tallies with the story circulating at the time at the two upgrades left little change from quarter of a million pounds. All this at a time when whaling, the main revenue source, was in sharp decline.' (Personal communication)

(2) Richard LAWS (the Director the British Antarctic Survey) commented on the new Administrator’s house: ‘Coleman's House was on concrete pillars in pebble-dashed pre-fab construction. It was roomy and extremely well fitted out: kitchen with refrigerator, washing machine, drier, set of copper-bottomed pans etc. It was close carpeted throughout with ‘award-winning’ material, velvet curtains, tiled bathrooms, conservatory, study, morning room, dining room, very large lounge 16 with comfortable chairs and a superb view up the fjord. It had cost about £33,000. It was hardly usable by BAS in its present state, except perhaps for married senior scientists overwintering.’ (Autobiography; Part III of Richard M. Laws (1926-2014) the former director of BAS 1973-1987; unpublished)

(3) Magistrates and Administrators on South Georgia: