biologist and science administrator, was born on 23 April 1926 in Whitley Bay, Northumberland, second of three sons of Percy Malcolm Laws and Florence May Laws (née Heslop).

Attending Park Primary School, Monkseaton, until he was eleven years old, he won a scholarship to Dame Allan’s School, Newcastle where he was consistently at the top of the class. Evacuated to the Lake District during the war he learned not only to love the fells and the outdoors but also developed his artistic abilities in the Nature Diary that he kept. He won a scholarship to St Catharine’s College, Cambridge, where he later became a research scholar and honorary fellow. 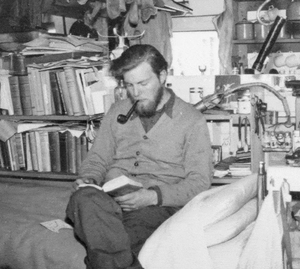 Despite starting a medical degree there, he changed his mind and in due course graduated with a first in Zoology in 1947, almost immediately sailing south as a biologist with the Falkland Islands Dependencies Survey (FIDS, later to become the British Antarctic Survey - BAS). At the suggestion of Brian ROBERTS, he was to study the biology of the southern elephant seal about which little was known.

Laws spent two years at Signy as scientist and base leader before returning to Cambridge to write up the results of the most comprehensive study to have been made of any species of seal. On the voyage home in 1950 he met Maureen Holmes whom he married in 1954: they had three sons. 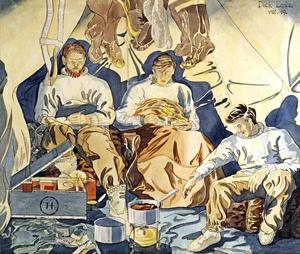 In 1951 Laws went south for a further year with the FIDS, this time in charge of the station at Grytviken, South Georgia, to continue his work on the elephant seal. His charge this time was to devise a sustainable management plan for the sealing industry on the island run by the whaling company Pesca. During the course of this work Laws found that the age of a seal (and indeed many other mammals) can be accurately assessed from the study of growth rings in the teeth — a discovery that revolutionised studies of the population dynamics of mammals.

The first regulations for the control of the sealing industry, which Governor ALLARDYCE had introduced in 1915, were based on observations made by the magistrate John Innes WILSON. These had been relaxed after World War II and a free for all had ensued. Using a more scientific approach based on population dynamics Laws re-introduced and modified the plan which divided the Island into a series of sealing areas and limited the size(and thus age) and sex of animals which could be taken. His proposal was adopted by the government and implemented successfully until sealing on the Island ceased in 1964. 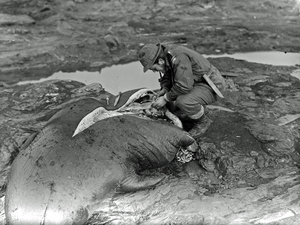 Laws at work on an elephant seal at...

After completing his PhD on elephant seals in 1953, using data from Signy and South Georgia, Laws joined the National Institute of Oceanography, and returned to the Antarctic for a season, this time as a whaling inspector on the factory ship Balaena. He continued his research on whales until 1961, including aging whales by using their earplugs.

In 1961, fed up with the internal politics of NIO and disillusioned by the International Whaling Commission, Laws transferred his interest to large terrestrial mammals, and moved to Africa for the next eight years, initially as director of the Nuffield Unit of Tropical Animal Ecology in Uganda and later as first director of the Tsavo Research Project in Kenya. Here he concentrated on elephants and hippos and again established the need for rational management which included culling. 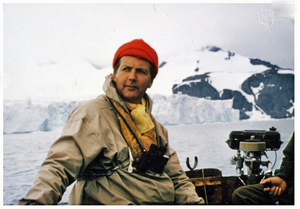 Laws returned to BAS in 1969, first as head of its Life Sciences Division, and then in 1973 as Director. He re-organised the Survey completely, setting a much more scientific focus on its work and supervising the move from all over the UK to the new building in Cambridge in 1975.

He was an enthusiastic supporter of the idea of using South Georgia for multi-disciplinary research and actively encouraged the growth of the station at King Edward Point from where summer field parties spread out over the whole Island. Despite the administrative burden, he continued to have a leading role in scientific forums, on both marine mammals and the Antarctic, especially in the Scientific Committee on Antarctic Research where he chaired several key committees for years and was elected President 1990-94. 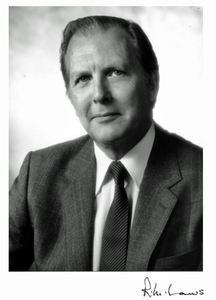 In parallel with this and starting before his retirement from the Survey in 1987, Laws had been Secretary of the Zoological Society of London (1984-88) and Master of St Edmunds College, Cambridge initially part-time (1985-87) and then full time, re-organising college affairs and expanding and broadening college activities until he retired in 1996.  He was also deeply involved in other university activities including the Examination Board for many years. 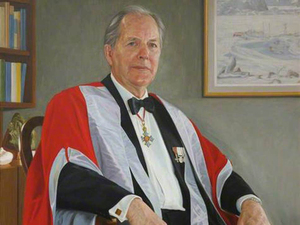 A portrait of Laws by Anthony...

On his retirement from BAS the Laws Prize was established to recognise the best young scientist in BAS each year. The Laws Glacier on Coronation Island, South Orkney Islands, is named after him.

An accomplished artist, he painted in water colours and oils throughout his life. Intellectually gifted, with a strong sense of right and wrong, Laws was always a natural leader. For those he respected and believed in, there was unwavering support but for those with an unjustified sense of their own importance (and that included many politicians as well as those attempting to interfere with BAS from the Natural Environment  Research Council - NERC) Laws could be scathing.

A man of his talents would normally have been rewarded with a knighthood on his retirement but his determination to do what was right set many of the establishment against him. He left a major legacy not only from his own innovative science on large mammals but also from his efforts to develop Antarctic science in general and his reorganisation and enlargement of St Edmunds College,

Richard Laws died on 6 October 2014 in hospital in Cambridge after suffering a major stroke at home.

See: Biographical memoirs of Fellows of the Royal Society 12 August 2015

R M Laws; Identification and ageing of the hippotamus; African Journal of Ecology; 1968