botanist, was born on 19 July, 1928 in Cork to a landowner and his wife (née Dickson). Stanley Greene never quite lost his Irish accent despite living most of his life in England. He attended Trinity College, Dublin where he obtained a first class degree in Natural Science in 1951. His first job after graduating was as a botany demonstrator at the University College of Bangor where Professor PW Richards inspired his life-long interest in bryophytes (mosses and liverworts). 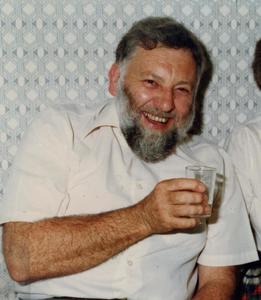 In 1953 he married Dorothy Mary Douglas (1928-1994), the daughter of a school teacher from Coleraine, Co Londonderry, whom he had met at a bible reading class in Trinity College. They celebrated their nuptials with a teetotal wedding, an approach which rapidly changed as Greene developed an enthusiasm for wine and a lack of enthusiasm for religion.

He was appointed a lecturer in cryptogamic botany (mosses, ferns, fungi etc) at Birmingham University in 1955 (later being promoted to senior lecturer) and his wife became a part-time demonstrator in botany.  His enthusiasm for bryophytes fired her interest and in 1959 she presented an MSc on British bryophytes and then in 1961 began to study Antarctic bryophytes to assist his work. (She was the first woman scientist to go south with the British Antarctic Survey - BAS). Greene had decided to produce the first detailed flora for South Georgia as his research focus and he arranged a visit there in 1960-61 for what he described as “the first botanical expedition to the island”. 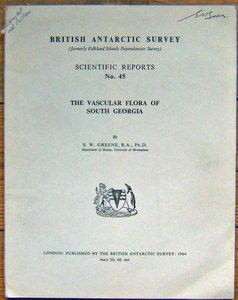 In the course of the summer, with transport on the sealing boats, he visited Diaz Cove, Undine South Harbour, Holmestrand, Wilson Harbour and Johan Harbour on the south coast, Bird Island and the Willis Islands and numerous localities on the north coast (including Elsehul, Bay of Isles, Ocean Harbour, Royal Bay, and Larsen Harbour). Based at King Edward Point he was able to cover in detail all the areas around Grytviken and the Stromness Bay whaling stations. This resulted in 1964 in the publication of BAS report no 45, The vascular flora of South Georgia, and allowed him to establish an herbarium of South Georgian and Antarctic plants.

In 1963 he became the honorary research supervisor of the BAS Botanical Unit at Birmingham and in 1965-65 went on sabbatical leave to New York Botanical Garden from where he organised trips to Alaska and to McMurdo Sound in Antarctica. Greene was determined to provide the first bryophyte flora for the Antarctic and the initial step was a study of the bryophytes of South Georgia: but to do this he needed to get back to the Island. 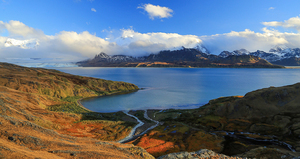 The Greene Peninsula in South Georgia...

Working with Dr Martin Lewis at Birmingham, the two developed the International Biological Program Bi-polar Botanical Project. Lewis was responsible for the Greenland work and Greene for the work on South Georgia. The Greenes spent the austral summer of 1967-68 on South Georgia leading a team of young scientists who were working on comparative plant productivity studies for IBP while they, together with Giles Clark, devoted their time to collecting bryophytes.It was at this point that Greene conceived the idea of mapping the flora of the Island, an enterprise which he started in 1960 by recording the locations of all the herbarium plants he examined for the flora on to a 5km grid superimposed on the Island map. From 1969-70 onwards for a period each summer RRS John Biscoe supported a small botanical team which worked systematically, visiting all the accessible 5km squares around the Island to record  the vegetation and collect specimens. Meanwhile Dorothy Greene, under his supervision, was building the first Antarctic plant database.

Greene became the head of the botanical section of the newly established BAS Life Sciences Division in 1969 and was now formally employed by BAS. The retirement of Ted Smith as head of the Zoology Section of BAS allowed Dr RM LAWS to take over there and whilst there was a working relationship between Greene and Laws they were not close friends. In 1973 when Laws succeeded Sir Vivian FUCHS as Director of BAS and reorganised the Survey he appointed Nigel BONNER rather than Greene to head Life Sciences Division. Laws required Greene to stop taxonomic work (which he considered old fashioned) and to severely reduce the size of his section.

The Greenes left BAS in 1974 and joined the Institute of Terrestrial Ecology in Penicuik (Midlothian) where he remained for seven years as head of plant biology. By 1978 cryptogamic botany and taxonomy were declared to be outside NERC’s research interests and once again Greene had to reduce his staff and change focus.

In 1981 he moved to Reading University as NERC Reader in Botany where he could again work full time on cryptogams and where he remained until after his retirement in 1987. His own publications and those of his group at BAS laid important foundations for the publication of the complete lichen (2001) and moss (2008) floras for the Antarctic which eventually followed.  In 1978 his marriage had broken up and now divorced he left Reading in January 1989 to live in the Netherlands at Bilthoven with a new wife, Paula Stuurman. Greene died of a heart attack on 14 June 1989 just a few months after he had married.

He is commemorated by the Greene Peninsula on South Georgia.