governor, was born on 29 June, 1926 in Redcar, Yorkshire, the son of Henry William Hunt and Ivy, née Masterman. He was educated at Sir William Turner's School, Coatham and St Peter's College, Oxford. On 22 September 1951 he married Mavis Amanda, daughter of George Albert Buckland, MM, of Chingford, Essex, and May, née Ferne. They have two children, Diana Mollie Amanda (b1962) and Antony Paul Masterman (b1964). 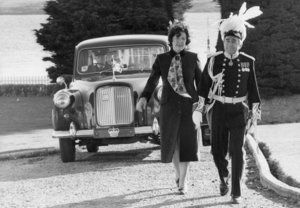 Hunt joined the Royal Air Force as soon as he was old enough in 1944. He served as a fighter pilot on No 5 Squadron in India and on No 26 Squadron in Germany in 1948, when he left the RAF and returned to Oxford to complete his law degree. He joined the Overseas Civil Service in 1951 and served in Uganda as a district commissioner until 1963, when he joined the Commonwealth Relations Office and was posted as first secretary in Kuching (Sarawak), which by then was part of Malaysia. He was there from 1964-65, then to Jesselton (Sabah) 1965-67 and Brunei 1967. He was next posted to Ankara (Turkey) as first secretary (commercial) from 1968-70. From 1970 to 1972 he was first secretary and head of chancery at Jakarta {Indonesia} followed by a spell in Middle East Department, FCO from 1972 to 1974. He was then posted as counsellor, Saigon from 1974 to 1975, when the North Vietnamese took over and the British Embassy had to be closed down. He then went as counsellor to Kuala Lumpur, 1976-77, before being promoted to deputy high commissioner 1977-79.

Early in 1980, Hunt was made governor and commander-in-chief, Falkland Islands and high commissioner, British Antarctic Territory. He was awarded the CMG.

In Hunt's previous experience, a British colony always had an experienced triumvirate of chief secretary, financial secretary and attorney general. These were the three sides of the pyramid which supported the governor. Hunt had an excellent chief secretary in Dick BAKER and a remarkable financial secretary in Falkland Islander Harold ROWLANDS; but no attorney general. The Overseas Development Administration took a long time to produce one. 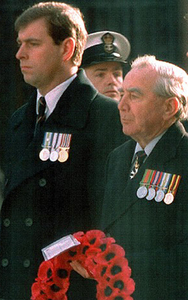 Rex Hunt with HRH the Duke of York...

The year 1980 was an important milestone in Falkland Islands' history. The Falkland Islands Company agreed to sell one of its farms on favourable terms to the Falkland Islands Government, which in turn offered soft loans to six selected Falkland Islanders to buy their own farms. Hunt was delighted to present the title deeds to the new owners. Green Patch was split up into six subdivisions, roughly 15,000 acres and 3,000 sheep apiece. The joy on the faces of the young farmers and their families told clearly what it meant to them. For the first time, they had a stake in their own land. At last Lord SHACKLETON's recommendation to transfer farm ownership to local owner-occupiers had begun.

Another important recommendation of Shackleton's report was to develop a Fisheries Conservation Zone and licensing system. Hunt had been pressing for this since his arrival, but FCO's reply was always 'too provocative'. They could hardly continue to say that after Galtieri's invasion without provocation, but it was not until 1986 that a Fisheries Zone was declared and licences issued. 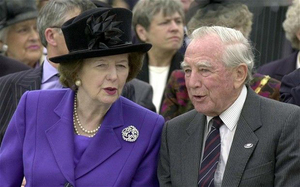 In the first year, 215 licences were issued to fishing vessels and during the first two years, the FIG's revenue jumped from £6 million to £22 million. The main catch came from squid, both Illex and Loligo, names that are now as common in the Falklands as wether and hogget. Councillors were naturally delighted at the high revenue received, but their financial secretary kept a steady hand and as a result the income from reserve funds is second only to the revenue from the fisheries.

Going back to 1981, the FCO minister in charge of the Falkland Islands, Nicholas RIDLEY, had brought out what he called a simple message for the Islanders: 'The "dead hand" of the sovereignty dispute was stagnating the Islands' economy. It was therefore in the Islanders' interest to resolve the dispute'. 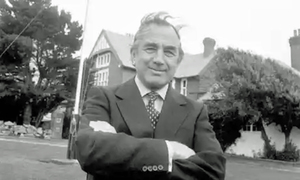 Rex Hunt outside Government House in...

Subsequent history has shown that it was not the 'dead hand' of the sovereignty dispute that stagnated the Islands' economy, but the 'dead hand' of Whitehall. Lord SHACKLETON told Hunt in 1982 how disappointed he was that virtually none of his team's 1977 recommendations had been implemented. That was why the economy was in serious decline. Fortunately for the Falkland Islanders, Lord Shackleton was invited during the 1982 conflict by the Prime Minister, Margaret Thatcher, to update his report, which he did by September 1982.

Galtieri's folly changed the lives of the Falkland Islanders completely. Until 2 April 1982, few British people either knew where the Falkland Islands were or had the slightest interest in them. The FCO had been trying since 1968 to win over hostile local opinion on closer ties with Argentina, 'leading gradually but inexorably to the acceptance of Argentine sovereignty'. This was the assessment of the Falklands by Lord CHALFONT in 1968. He spent six days in the Islands: Hunt spent almost six years there. 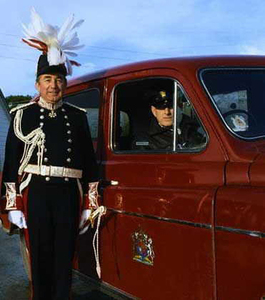 Rex Hunt and Don Bonner - with the GH...

After Galtieri's folly in 1982, Hunt was no longer governor and commander-in-chief, but civil commissioner. The military function was separated from the civil, and left to the military commissioner. Hunt explained on the Falklands Islands Broadcasting Service the reasoning behind his change of title. It was based on the sound practical reason that with five or six thousand troops and a major general in charge of all the British forces on the Falkland Islands, the governor was greatly relieved to have his military responsibilities removed. Hunt was appointed a Knight Bachelor in 1982.

Hunt lost no time in establishing a joint civil and military Rehabilitation Committee, with the aim of restoring the Falkland Islands to normality as soon as possible. By 1985, the Islanders and their councillors had won their wish to go back to governor rather than civil and military commissioners. This was agreed by the Foreign and Commonwealth Office and the Ministry of Defence. 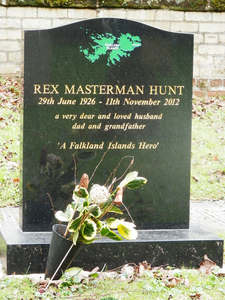 Since retirement from the Diplomatic Service he has made six visits to the Falkland Islands and each time he has become even more confident that, regardless of Argentina's continuing claim, the Islanders have the firm belief that they can and will be masters of their own destiny.