chief secretary, eldest child of Stephen Baker and Jessica Wilhelmina, née Clarke, was born on 19 April 1933 at Sheerness, Kent. He was educated at Borden Grammar School and New College Oxford. After national service in the Royal Navy as a sub-lieutenant RNVR, he returned to Oxford in 1957 for the course in overseas administration and was then appointed a cadet administrative officer in the British Solomon Islands Protectorate {Solomon Islands}, in the western Pacific. 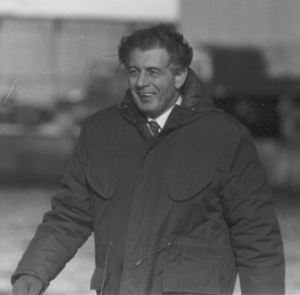 From 1958 to 1963 Baker served in various posts in the Solomons in district administration, co-operatives development and the Secretariat. For personal reasons he then remained for four years in the UK working in the family farming business. In 1967 he was invited to return to government service in the Western Pacific and spent the following twelve years in administrative posts with the British service in the Condominium of the New Hebrides {Vanuatu}.

In 1979 he accepted the post of chief secretary to the Falkland Islands Government. Accompanied by his wife and two younger children, Karen and Helen, Baker arrived in Stanley in March 1979 and as lifelong 'islands people' the family soon became very much at home in the Falklands and made many lasting friendships there. At that time every aspect of Falklands life was overshadowed by the Argentine sovereignty claim. One of Baker's first official acts was to witness Governor PARKER 's signature to some documents concerning the status of former whaling stations in South Georgia; he noted the Governor's prescient disquiet at possible future Argentine involvement there. (Parker's unease proved well-founded three years later, when Davidoff's involvement in South Georgia was closely followed by the Falklands Conflict). 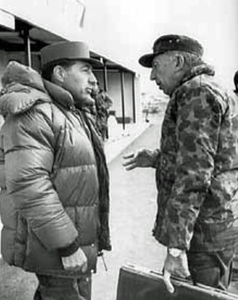 The other constant preoccupation at that time was the struggle to maintain the budget in balance and prevent the Colony from sliding into 'grant-maintained' status. There was a need to develop some new economic activity to supplement the traditional wool production. Along with many others, Baker saw fisheries development as the key here and regretted HMG's determination not to allow this or the declaration of any economic zone around the Islands in case this should 'upset the Argentines'. Indeed it was not until 1987, when they had been well and truly 'upset' that this development was allowed, with dramatic results.

Reform of the system of agricultural land holding was a less frustrating area and one of the few recommendations of Lord  SHACKLETON's original Report on which it had been possible to make some progress. The first step in this process, 'The Green Patch Scheme', was just coming to fruition and Baker was happy to be much involved in the further development of this policy. It was clear that means had to be found to satisfy the aspirations of Islanders (and possibly some newcomers) to own and farm their own land, and subdividing some of the larger farms provided a way forward. Progress was made here but there was a serious potential problem of undercapitalisation.

Manpower was a constant problem and there were always shortages of particular skills. Baker was enthusiastic about the idea of filling some of these job ­vacancies by recruiting workers from St Helena where there was a shortage of employment opportunities. The Conflict prevented implementation of the pilot scheme but soon afterwards it was possible to proceed on quite a large scale and by that time Baker was able to assist from his next post in St Helena.

The improvement of education facilities was an ongoing aim and the need for a proper secondary system had become pressing. Geography dictated that secondary pupils from Camp should board in Stanley. This was the key to secondary development and the long and frustrating struggle to provide acceptable accommodation was yet another story which did not reach a successful conclusion until after the Conflict.

During the Argentine invasion on 2 April 1982, at the point when it was decided that negotiations would need to be opened with the Argentine forces, Baker undertook to make the initial contact with the Argentine commander Admiral Busser. He and his family were expelled by the Argentines on 13 April 1982, but returned on 25 June. He was appointed governor and commander in chief of St Helena and its dependencies in 1984 and served until retirement in 1988. Baker was awarded the OBE in 1979 and advanced to CBE in 1984.

Baker considered himself fortunate with the governors he served under, at first James PARKER and then for a rather longer period Rex HUNT, and also with the very supportive civil service and councillors and the many other friends he made throughout the Islands.