financial secretary and councillor, was born in Stanley on 10 July 1931, the youngest of three children of Conrad Rowlands and Lucy, née Larson. His brother was John ROWLANDS (b.1928) and his sister was Betty BIGGS (b.1929) 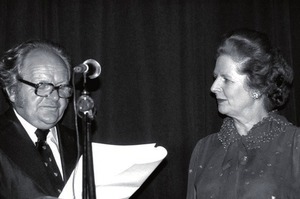 297 Harold bestowing the Freedom on the...

He lived throughout his life in a house on Stanley waterfront built for his grandfather, Captain Frank Rowlands, who was shipwrecked as a Swedish seaman, aged only 16 years, in 1860.

Educated at Stanley school, Harold Rowlands began work selling flour in Stanley's West Store. He entered government service in 1948 at the Treasury and Savings Bank where hard work and an aptitude for accountancy took him to the top of his profession in 1972, as financial secretary and commissioner for taxation.

From 1974 all Falklands banknotes carried his signature and a Stanley story relates that once, during a round-up in Buenos Aires, he autographed a fiver to establish his identity with the Argentine police. 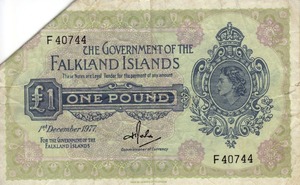 During the 1982 Argentine invasion and military occupation, Rowlands as financial secretary, was the most senior administrator after all British expatriate officials had been deported.

He won wide respect for his courage, fortitude and resilience as he guided the population through the dangers of occupation, fierce fighting, and Argentine intimidation.

He kept the Islands' savings bank operating; refused to levy taxes; blocked Argentine access to the vaults; and obstructed conversion to the inflated Peso currency, informing the Argentines he was 'too old to start thinking about so many noughts!'

His fellow Islanders chose him to bestow the Freedom of the Falklands upon the Prime Minister, Margaret Thatcher, who visited in 1983.

His prudent stewardship saw the Falklands budget rise from just over half a million pounds in 1973-4, to more than £30 millions by 1988, boosted by income from the fishing industry.

After 40 years he retired in 1989. He was elected to LegCo with an overwhelming majority but served only one four-year term. He delighted in the new found stability and prosperity, but the strain and overwork of the Argentine invasion and its aftermath affected him for the rest of his life. He forged an enduring rapport with the Port Squadron of the British Forces, which worked on the waterfront, welcoming them into his home. 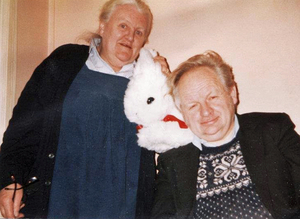 Harold Rowlands with his sister Betty...

Rowlands was an excellent storyteller with a vast knowledge of Falklands history. He travelled extensively, loved jazz and musical theatre and enjoyed singing the lyrics of Hello Dolly at parties. He was widely respected as a hard-working, humorous, kind-hearted man of complete integrity.

Harold Rowlands was unmarried and died in Stanley on 17 April 2004.