business man and councillor, was born in Stanley on 3 April 1928, the eldest child of Conrad Rowlands and Lucy, née Larson. His brother was Harold ROWLANDS (b.1931) and his sister was Betty BIGGS (b.1929) 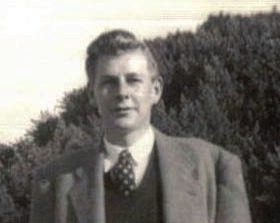 His ancestors were Swedish and Norwegian, Scots and English. He attended school in Stanley and in 1942 started a varied career at local entrepreneur Les HARDY's mineral water factory. His next employment was with the PWD as a truck driver. During this time he was sent to Government House to act as relief chauffeur; but one too many shopping trips for refreshments at the request of the governor's wife ensured he did not continue in this occupation. In 1948 he joined the CDC South Atlantic Sealing Company working at Albemarle station and on company vessels. On the closure of the sealing venture, he joined RMS Fitzroy as fireman.

Another CDC development project was underway and Rowlands joined the ill-fated Ajax Bay Freezer Company, where he worked as power station engineer until its closure in 1955. He was then invited to join the FIC to assist in running the works stores department and then as a self-employed contractor he worked at various building and maintenance contracts. In 1960, with the late RW Ross he hired the government Albion Cuthbertson swamp tractor and drained areas of land in the north of East Falkland. He then continued contracting and began importing and selling petrol for the increasing number of ex-military vehicles being imported. 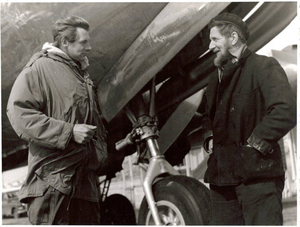 Along with Jim Shirtcliffe, Rowlands started house building on new sites in West Stanley, building the first Dorran precast concrete panel houses and this continued until completion when he joined Rock & Alluvium Engineers, a south London Company with a defence contract as site agent on several local jobs. Another unusual task he took on at this time was to use the swamp tractor to de-bog the DC4 airliner hijacked to Stanley by the CONDOR Group in September 1966.

He bought the Rock & Alluvium assets and began to undertake larger contracts on his own behalf, working for the British Antarctic Survey, the European Space Research Organization, the Ministry of Defence and Falkland Islands Government, including the power station extension and paving many of the Stanley roads. The quality of the road building works especially was a source of great pride to him in later years in comparison with some of the more recent efforts in that field.

Rowlands was a long-standing member of the Labour Federation (later the General Employees Union), of the Working Men's Social Club and the Falkland Islands Defence Force. He was elected to Legislative Council from 1962-65, but he became disillusioned with the failure to make any progress on a broader front other than issues to benefit farmers. He did not seek re-election. He was one of the founding members of the National Progressive Party which was a political party formed during the mid 1960s and which started campaigning to defend Falklands sovereignty when it appeared to be in danger from 1964 onwards. He was treasurer and vice-chairman of the Falkland Club and an enthusiastic member of the planning and building committee from its inception until his resignation through ill health in 1998.

He was local subcontractor to Johnston Construction Ltd on the building of Stanley Airport from 1974-78 and employed many of his fellow citizens, enabling them to learn new skills and improve their earnings. His equipment was all damaged during the 1982 conflict and for health reasons he was unable to continue contracting work and he returned to PWD as plant storeman until his retirement in 1993.

Rowlands was a keen observer of the progress in Islands life since 1982 and was often concerned about the poor quality of work and wasteful use of much of the development money which had been given to the Islands. He also believed that the newfound fishing wealth was being distributed in too many non-productive schemes often for little or no effort or return. His knowledge and advice was sought by some of the younger generation seeking new opportunities and it gave him great pleasure to see some of his ex-employees such as Paul Bonner and Michael and Neil McKay grow into the Falklands contractors of today.

Rowlands enjoyed one holiday during his 50 year working career when in 1979 after many years of reading Time and National Geographic he travelled through Canada and the USA and brought the pages to life. His observations on this journey would have made a very entertaining travel book.

His knowledge of Falkland history was endless. He had collected many entertaining accounts of Stanley and of some of its most colourful characters and events. Although a shy and private man, on better acquaintance he was well-informed, being an avid reader seeking both enlightenment and humour and a great conversationalist on many subjects. Every encounter with him was an education.