Operation Condor was the hijacking of an airliner to Stanley by a group of Argentine nationalists on 28 September 1966. The origins of Operation Condor are linked to the Argentine political organisation Tacuara*, a Catholic nationalist group created in 1955 by young activists with diverse backgrounds but a shared anti-Semitic, bigoted and radical view of political affairs. Many of its members later joined Peronist and Trotskyist armed groups, most notably the Montoneros and the People's Revolutionary Army (ERP). On 9 June 1961 a section of Tacuara established the New Argentina Movement (MNA), which was one of the first right-wing groups of the Peronist party. Among MNA's founding members were the journalist Dardo Manuel Cabo (1941-1977), son of the metalworkers' leader Armando Cabo, and the student Alejandro Giovenco (1945-1974). In 1965, when Juan Domingo PERÓN's third wife Isabel Martínez visited Buenos Aires, these two were among her personal bodyguards. Cabo and Giovenco were to be Operation Condor's commander and second-in-command. 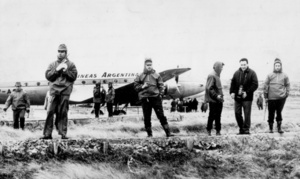 On 28 August 1963, a revolutionary faction of Tacuara held up the Policlínico Bancario hospital in Buenos Aires, taking cash reserved for salaries worth over US $100,000. This attack was the first of a long series of violent urban guerrilla operations in the second half of the twentieth century. Dardo Cabo did not participate directly in the attack, however he was arrested in 1964 through links to its organisers. One of the these, Horacio Rossi, an experienced militant who had been expelled from the navy, received US $500 from the bank raid and went to Bahía Blanca to charter a ship, the Río Segundo, which he proposed to sail to Port Stanley with twenty or thirty combatants in order to invade the Islands and drive out the English. The operation was named after Antonio RIVERO, and the plan proposed to offer the Islands to the exiled ex-president Juan Domingo Perón to use as a base for his return to Argentina. However Rossi had to face other responsibilities and got married after learning that his fiancée had become pregnant. The funds were reassigned to establish a publishing house, Editora del Sur, which edited a paper of the Peronist Youth organisation.

Dardo Cabo and Alejandro Giovenco pressed on with the plan, and renamed it Operation Condor to symbolise the national rebellion against the imperialist forces. They were joined by the journalist and playwright María Cristina Verrier (b1939), the only woman in the group and the daughter of César Verrier, justice of the supreme court and minister during the administration of President Frondizi in 1958-1961. The eighteen members of the group were carefully presented as university students, manual labourers, and white-collar employees, and their average age was twenty-four. Some of them met for the first time in the aircraft. Supporters in Buenos Aires and Río Gallegos liaised with the press and the authorities.

On Wednesday, 28 September 1966 an armed group hijacked flight 648 of Aerolíneas Argentinas on its regular run from Buenos Aires to Río Gallegos and Ushuaia, and forced the pilot Ernesto Fernández García to fly off-course to the Falkland Islands. At 8.42am, the Douglas DC4, LV-AGG, landed on Stanley racecourse. The hijackers landed from the aircraft and hoisted seven Argentine flags, trying at the same time to keep the Islanders, who thought this was an emergency landing, away. The group delivered a formal statement in English (although addressed chiefly to the Argentine public) to reaffirm Argentine sovereignty over the Islands. They invited the Islanders to adopt Argentine citizenship, and renamed the Islands - Malvinas and Port Stanley - Puerto Rivero. They went on to seize seven hostages. At this, the Islands' authorities blocked in the aircraft using Landrovers.

Among the thirty-four passengers of flight 648 was, by chance, Rear-Admiral José M Guzmán, military governor of Tierra del Fuego, (which included, in Argentine law, the Antarctic territories, the Falklands/Malvinas and South Atlantic islands). Another passenger was Héctor Ricardo García (b1930), journalist and editor of Crónica newspaper and Así magazine of Buenos Aires, who claimed to have been invited to witness the operation without knowing its details, but who was in fact its principal promoter. His paper, Crónica was an innovator among the sensational press, characterised by oversized headlines, generous use of illustrations, and dramatic rhetoric, particularly in sports and show business news. Two years before, Crónica had provided press coverage to Miguel L FITZGERALD when he landed in Stanley and returned to Argentina. Two years later, García would personally accompany Fitzgerald on his second flight, using Crónica' s private aircraft. The Malvinas were a hot-selling subject for the sensational press in Argentina, and Héctor García was an expert in exploiting these matters. He was proud of sending his journalists and photographers to create rather than simply report the news. 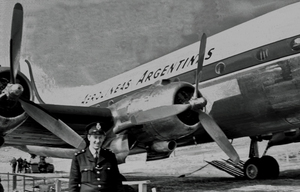 When the news of Operation Condor arrived in Buenos Aires and was publicised by García's media, the military government headed by president Juan Carlos Onganía reacted against it and took legal action against the group. Except for some isolated support among nationalist circles and certain labour unions, most people saw Operation Condor as a sporting exploit, on the same lines as Col Jorge Leal's military expedition to Antarctica in February of that year, rather than as a political statement. However, that evening some rioting took place at the residence of the British ambassador in Buenos Aires and the consular office in Rosario.

The day of the landing at Stanley, through the mediation of Governor Guzmán and the Catholic priest Father Rudolph ROEL, the passengers and part of the crew left the aircraft and were accommodated in private homes, and the following day they were sent to Buenos Aires via Montevideo. Fr Rudolph Roel celebrated a mass in Spanish in the aircraft, and all hostages were set free. The following day, the hijackers refused to surrender to the Falkland Islands Government, but accepted Fr Roel's proposal to give up their arms and to be confined in the Catholic church in Stanley. On 1 October, after tedious negotiations, attempts by the Islanders to recover the Argentine flags, and public performances of the Argentine national anthem by the failed invaders, the latter were finally taken to the Argentine navy transport Bahía Buen Suceso, and sailed to Ushuaia, where they landed on 5 October 1966. Three days later, in a delicate operation, the Douglas DC4 took off from Stanley racecourse and arrived safely at Río Gallegos the same evening.

The hijacked plane shortly after...

Nine months after being held by the police in Ushuaia and Río Grande, fifteen members of the Condor group were released, while three were held in Bahía Blanca for the judicial hearings. On 13 October 1967 a federal high court confirmed the sentences of three and a half years imposed on Dardo Cabo, Alejandro Giovenco and Juan Carlos Rodríguez on the charges of illegal deprivation of liberty, aggravated by use of violence and illegal possession of weapons. The charges of theft of an aircraft and seizure of hostages were dismissed.

While he was in prison, Dardo Cabo married María Cristina Verrier, and they had a daughter, María. In the late 1960s, Cabo joined the left-wing forces of Peronism, heading commandos of the Montoneros guerrilla group. In the 1970s he was a high-ranking officer of the organisation and edited its paper El Descamisado. Cabo was kidnapped in 1975 in greater Buenos Aires and was executed on 7 January 1977 by a military death squad when being transported from the penitentiary number nine of La Plata. Alejandro Giovenco, who in the early 1970s created an extreme right-wing group of Peronists, died in 1974 when trying to place a bomb in the Peronist Youth headquarters. Only two of the seven Condor group members who died before 2004 died of natural causes. 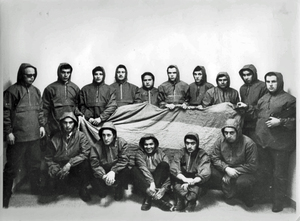 Besides the weak support which Operation Condor attracted in Argentina, the operation's major consequence was the immediate cooling of the negotiations undertaken by Argentina and the United Kingdom at the United Nations. UN General Assembly resolution 2065 adopted on 16 December 1965, which recommended a peaceful solution to decolonise the Islands did not prosper. The attitude of the military in Argentina hardened, paving the way to armed conflict. In the Islands, the incident is often called the first aerial hijack.