Argentine president, was born on 8 October 1895 in Lobos,in the province of Buenos Aires, to parents of Creole and Italian ancestry. He chose a career in the army and married Aurelia Tizón. In 1938, Perón was widowed, and in 1939 he went as part of a military mission to Italy - during Mussolini's administration, which he came to admire greatly. He is believed to have travelled widely in Europe on the eve of World War II, and sympathized with the Axis Powers. 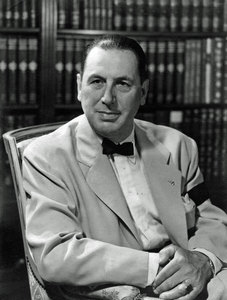 After returning to Argentina, he was one of the officers who seized power in the 1943 military coup. But, unlike the vast majority of the military then, Perón associated himself with Argentina's workers and urban proletariat - the poor European immigrants, who were so despised by Argentina's upper classes. He came to dominate the increasingly powerful Labour Secretariat in that Junta. In 1944, Perón met the beautiful and flamboyant actress and broadcaster María Eva Duarte, 24 years his junior. She became his mistress, and is better known as Evita.

Perón's pro-labour activities led to such frantic opposition from right-wingers and the military that he was forced out of all his government positions in October 1945, and briefly imprisoned on the island of Martin Garcia. However, massive demonstrations by trade unionists secured his release on 17 October - a date still celebrated by Peronists. Evita's passionate radio broadcasts had played a role - of disputed importance - in whipping up support for him, and Perón married her in a private civil ceremony five days later. 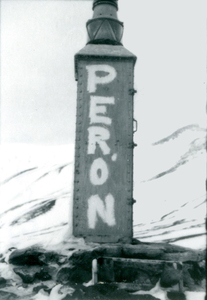 With the support of the working class, and Evita's popularity, Perón was elected president in 1946. Argentina was a rich country then, as it had profited enormously from World War II. But Perón squandered much of this wealth on the grandiose social projects which Evita was so fond of - although she also secured some worthwhile elements, notably female suffrage. Illegitimate herself, she could not rise above the humiliations of her youth and took every opportunity to harass Argentina's upper classes. They detested her as a result.

Perón's populist policies included a major anti-British element. He adopted as government policy the Argentine claim to the Falklands, which had been revived just a few years earlier by the activities of Alfredo PALACIOS. Peron had also been encouraged by the Germans during World War II, and by the 'Committee for the Recovery of the Malvinas' which was formed in Buenos Aires on 19 October 1939, specifically to take advantage of the outbreak of war. Shortly after the war, Perón told Bill Hunter CHRISTIE, then serving in the British Embassy in Buenos Aires, that he was going to use the Falklands to provide a diversion from domestic problems - a role in which the Falklands have been used ever since. 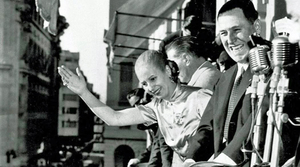 Juan and Eva Peron wave from the...

Perón also extended Argentine territorial claims to much of Antarctica and its adjacent islands in the South Atlantic. He issued a decree, on 24 June 1947, specifically claiming both South Georgia and the Falklands and there were a number of Argentine trespasses on Antarctic islands to which Britain had long standing territorial claims. On 17 December 1947 Britain offered arbitration on these new claims at the International Court of Justice in the Hague. But Perón rejected this on 28 January 1948, effectively saying that Argentine territory was not up for arbitration by anyone. Britain repeated these offers several times, from 1951 to 1954, and in 1955 tried to take the matter unilaterally to the Hague. This Argentina also rejected. Perón particularly alarmed the British during December 1947 and January 1948, when he sent warships to Antarctica. His pressure over the Falklands even led Foreign Secretary Ernest Bevin to warn Argentine Foreign Minister Bramuglia in 1948 that any attack on the Falklands would lead to war.

Perón also clashed with Britain over the nationalisation of the British owned railways in Argentina. These were in dire need of new investment and the concession for them was soon to expire anyway, but his confrontational style led him to nationalise them in 1947/48. The eventual deal actually paid far more compensation that they were worth. Many of the British staff then left, and inefficient state management led to the collapse of the railways in just a few years. 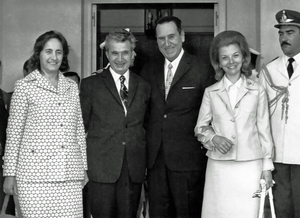 Juan Peron and his third wife -...

Perón was re-elected in 1952, but by then Evita was dying from cancer. She passed away on 26July that year. Perón then struggled on alone, but was deposed in a military coup on 16 September 1955, and forced into exile where he remained for the next 18 years.

But Perón remained a hero to many working class Argentines and was allowed to return by interim president Raúl Alberto Lastiri in 1973. He arrived on 23 September and won the election on 12 October 1973 and became president again - this time with his third wife, María Estela Martínez de Perón (Isabelita), as vice-president.

Perón died on 1 July 1974 in the presidential residence at Olivos, and his wife assumed the presidency. Her administration was extremely unstable. Left-wing terrorists (the Montoneros), and right-wing death squads, such as the 'Triple A', began to operate. The military, led by General Jorge Videla, finally deposed and exiled her in March 1976. They then began the notorious 'Proceso' of national re-organisation which led to the 'Dirty War' and the murder of 20 to 30,000 Argentines. As their regime began to fall apart, the military launched the Falklands war, as a diversion from domestic problems.

Perón was buried first in the huge Chacarita cemetery in Buenos Aires. There, his tomb was violated in June 1987, and the hands cut off his corpse. In 2006, Perón's body was moved to a mausoleum at San Vicente outside Buenos Aires, where Perón had lived for much of his life in Argentina. This is now a place of pilgrimage for Peronists, and the political movement he founded remains a most important part of Argentine political life.