Argentine historian, was born on 15 February 1848 in Toulouse, France, the son of Pierre Groussac and Catherine, née Deval. After an education in the classics, Groussac entered the Brest Naval College (Ecole Navale) in 1865 but left almost immediately, for what he was to say once was 'disobedience'. Groussac then abandoned his native France altogether and travelled to Argentina, arriving penniless and unable to speak Spanish in February 1866. He worked first as an agricultural labourer but with help from a friend, Pedro Goyena, he published a remarkable literary work in Spanish on the romantic poet Don José de Espronceda. This astonished everyone and in 1871 the minister of education offered him a teaching post in the province of Tucuman. He stayed there twelve years, during which time he married and had a family. 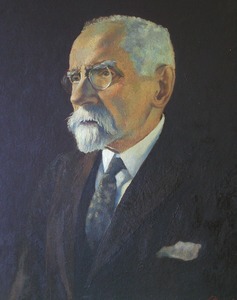 In 1883, he went back to his native France for a visit; but promptly returned to Argentina in 1884 to take up the post of national inspector of secondary education. Just a year later, in January 1885, he was offered and accepted the post of director of the National Library in Buenos Aires. This was a controversial appointment, as there were better-qualified Argentine candidates for this important position and Groussac was very probably chosen because of his links with the party of President Julio Argentino ROCA.

Groussac was an aggressive and irascible man and this is apparent in all his literary works. One of these was his book Les Isles Malouines published in 1910 in French, on the hundredth anniversary of Argentina's Revolution of May. This was a bitterly anti-British and one-sided book which misinterpreted some of the events of 1770 and 1771 - the Spanish seizure and restoration of Port Egmont. Groussac paid minimal attention to the American involvement in the events of 1831 to 1833, which in fact he knew all about. It was as if Groussac the immigrant was more determined to press his adopted country's case than a native might have been. His book was written before the Vernet papers were donated to the Argentine archives and Groussac makes no reference to them or to Vernet's pro-British sentiments. Nor did he consult the British state papers. 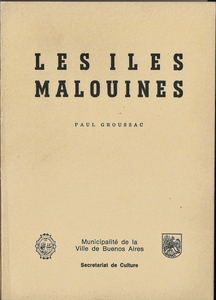 Groussac remained head of the National Library until his death on 27 June 1929, by which time he was blind. His influence endured: he had been a friend of the Argentine politician Dr Alfredo PALACIOS, who later founded the Committee to Recover the Falklands.

In 1934, Palacios promoted the passage of a law ordering Groussac's book on the Falklands to be translated into Spanish and distributed to all libraries and schools in Argentina. The translated books arrived in the schools in 1937 and Groussac's version of events entered the Argentine national history syllabus and played a crucial role in reviving Argentina's claim to the Falklands.

In his memory, Port William, Stanley's outer harbour, has now been renamed Port Groussac in the Argentine canon of shadow placenames.