Argentine president, was born in Tucuman in 1843, the fourth son of Don José Segundo Roca and Agustina, née Paz. He entered the Colegio Nacional in Concepcion del Uruguay (which is in Argentina) in 1852 and the next year obtained a commission in the army of the Argentine Confederation. He had a successful military career in wars in the 1850s between the Confederation and the forces of Buenos Aires and in the War of the Triple Alliance (1865-1870) when Argentina, Uruguay and Brazil were united against Paraguay. He commanded government forces in the so-called Campaña del Desierto, or Desert Campaign of 1877 to 1884 when the army, equipped with the famous Remington breach loading rifle, slaughtered the Patagonian Indians, killing between 50 and 60,000 and cleared the south for colonisation. 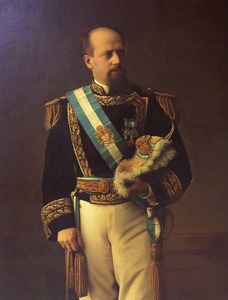 As minister of war for President Avellaneda, Roca was also responsible for sending Argentine forces to occupy Santa Cruz (which is directly opposite the Falklands) after a Chilean warship had seized the American ship Devonshire there, so ending Chilean claims to what is now Argentine Patagonia. With the Indians no longer around to impede Argentine expansion southward, and the Chileans pushed back to the Straits of Magellan, Argentina was left controlling the mainland opposite the Falkland Islands. In 1880, Roca, popular because of his victory over the Indians, was elected president and in January 1884 he resurrected the Argentine claim on the United States for the damage done by the USS Lexington (Captain DUNCAN) in 1831 and 1832 to VERNET's tiny settlement in the Falklands. This claim was linked to the ownership of the Falklands, because if the American case that the Islands were not Argentine were admitted, obviously there could be no claim for damages.

The British minister at Buenos Aires, Edward Monson, had been warned in 1884 that Argentina intended to round off her territory. The Argentine Geographical Institute - supposedly independently - included the Falklands in an Atlas of Argentina it was preparing in the same year. When news that the atlas included the Falklands was publicised in December 1884, Britain made a diplomatic protest, leading to the so-called 'Affair of the Map' - an exchange of diplomatic notes over the next four years. This atlas and the exchange of notes resurrected the Argentine claim to the Falklands which had effectively been relinquished by ROSAS thirty-five years earlier with the 1849 Convention of Settlement. 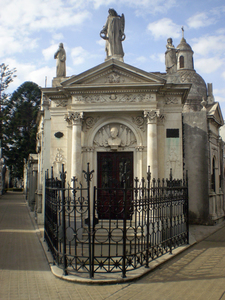 Roca was re-elected President for another term from 1898 to 1904. During this period there was very serious tension with Chile over the boundary around the Strait of Magellan. To stave off the threat of war, Roca travelled to Punta Arenas in February 1899 to meet the Chilean President Federico Errazuriz. The two presidents made peace and King Edward VII of Britain was invited to arbitrate on their territorial disagreements. In November of 1902, King Edward's decision brought peace to the area for another seventy years, until the Beagle Channel dispute in the 1970s.

In 1872, Roca met his future wife Clara Funes and from that union there were five daughters and a son. He took little part in public life after his second term as President. On 19 October 1914 he died on his estate, 'La Argentina'. He had been a remarkable soldier and statesman, though something of a despot too. He was nicknamed zorro or zorrito - 'the fox'- because of his cunning and ability. He made a major contribution towards the Argentina we know today - and his actions revived the Falklands dispute.